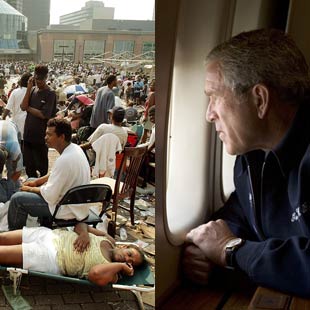 Hurricane Katrina and its disastrous aftermath have stripped away the Mardi Gras veneer and casino gloss of the Gulf Coast region, and disclosed the stark disparities of class and race that persist in 21st century America.

The growing gap between the rich and the poor in this country is old but underreported news–perhaps in part because so many of the poor also are black. Accordingly, many Americans were surprised that most of the victims of the New Orleans flood were black: Their image of the Crescent City had been one of jazz, tasty cuisine and the good-natured excesses of its lively festivals.

Where did all those black people come from, they wondered; and where were the white victims?

African Americans make up about 67 percent of the population of New Orleans, but clearly they were disproportionately victimized by the hurricane and its aftermath. And while blacks make up just about 20 percent of those living along the Gulf coast of Mississippi, their images dominated media representations of the victims there as well. In addition to race, the common denominator between blacks in both states is poverty. The “Big Easy,” has a poverty rate of 30 percent, one of the highest of any large city. The state of Mississippi has the highest percentage of people living in poverty of any state and the second-lowest median income. The state’s Gulf Coast experienced an economic boom when casinos were legalized in the early ’90s, but that new affluence did little to ameliorate the race/class divide that has deep roots in the region.

Among other things, the monster storm blew away the pretense that race has ceased to matter in the United States. Media coverage of this major disaster has made it clear that poverty and race are highly correlated.

Katrina also unearthed other uneasy truths; including the glaring ineptitude of the federal government, the domestic consequences of the illegal Iraqi invasion and the media’s proclivity to employ racial stereotypes.

Critics complain that the overwhelming blackness of the victims may have been a factor in the government’s apparent slowness to respond. In a reflection of popular black opinion, hip-hop artist Kanye West went off-script during an NBC benefit concert for Katrina victims and declared, “George Bush doesn’t care about black people.”

Others have been a bit more circumspect. “If the hurricane had struck a white, middle-class neighborhood in the northeast or southwest, [Bush’s] response would have been a lot stronger,” the Rev. Calvin Butts, president of the Council of Churches of New York City, said in an interview with London’s Observer. “We have an amazing tolerance for black pain,” said the Rev. Jesse Jackson, adding that conditions among the evacuees reminded him of “Africans in the hull of a slave ship.”

Whatever the motive, federal misfeasance is getting the blame in many media anatomies of the catastrophe. “Three years ago,” wrote Tim Rutten in a September 2 Los Angeles Times column, “New Orleans’ leading local newspaper, the Times-Picayune, National Public Radio’s signature nightly news program, ‘All Things Considered,’ and the New York Times each methodically and compellingly reported that the very existence of south Louisiana’s leading city was at risk and hundreds of thousands of lives imperiled by exactly the sequence of events that occurred this week.”

The Times-Picayune, in fact, published a five-part series on the potential for catastrophe and specifically noted the danger to the city’s poorest residents. The series, written by John McQuaid and Mark Schleifstein was uncanny in its prescience. “It’s only a matter of time,” they predicted, outlining a scenario that has gone according to script. “Evacuation is the most certain route to safety but it may be a nightmare,” they wrote. “People left behind in an evacuation will be struggling to survive. Some will be housed at the Superdome, the designated shelter in New Orleans for people too sick or infirm to leave the city. … Thousands will drown while trapped in homes or cars by rising waters.” The city’s black communities were located in the lowest lying areas of the city.

The Times-Picayune series was only one of several insistent warnings. But in the face of these repeated warnings, the federal government failed to step up to the plate. As Joel Bleifuss and Brian Cook noted in a recent piece politics and restructuring of FEMA prevented any meaningful response to the disaster.

Disaster officials told Knight Ridder news service that “the government wasn’t prepared, scrimped on storm spending and shifted its attention from dealing with natural disasters to fighting the global war on terrorism.”

The storm’s racially disparate impact and the media’s inordinate focus on lawlessness and looting has mobilized dozens of African-Americans organizations to mount their own efforts. The Rev. Jesse Jackson has visited the area and joined in an effort to relocate flood victims to clean shelter. Every major civil rights group has announced a program to address the crisis. The Congressional Black Caucus has issued a number of unusually strong statements condemning the Bush administration for its inaction.

This has been a major blow to the GOP’s campaign to get more black votes. African Americans are angry at the Bush administration’s lackadaisical response to Katrina and its ineptitude is likely to taint other Republicans. What’s more, the administration’s incompetence has shaken the confidence many Americans once had in our war-time president and has considerably weakened his political hand.

If only this new political understanding hadn’t come at the cost of mass displacement and thousands dead.