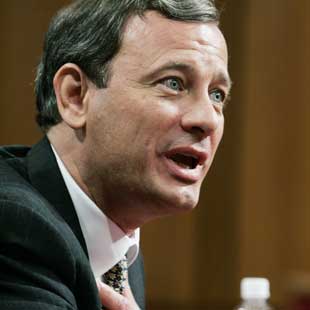 Bad on the Basics

Absent a political upheaval causing turbulence equal to that of Hurricane Katrina, John Roberts will be confirmed by the United States Senate as Chief Justice of the Supreme Court on September 22. With a few notable exceptions, the Democrats have been as befuddled about this nomination as they have been about war and torture in Iraq, increasing the minimum wage, tax breaks for the rich, a coherent response to the devastation along the Gulf Coast, etc., and are without the will or the numbers to derail President Bush’s quest to turn the nation’s highest court into a neo-conservative enclave.

The Democrats can thank themselves for this sorry situation. It must not be forgotten that William Jefferson Clinton, before he became an ambassador-at-large for the Bush administration and its failures in the Katrina disaster, joined forces with his 1996 Republican presidential opponent, Senator Bob Dole, in calling for the impeachment of a New York federal judge, Harold Baer, for having suppressed evidence of a large amount of contraband drugs seized in a case oozing with racial profiling. (Faced with a political firestorm, Baer would reverse the decision three months later.) In so doing, Clinton not only trespassed into the domain of the judiciary, but he aligned himself with the congenitally intemperate Rep. Tom Delay (R-Texas), who makes it a practice to call for the removal of federal judges when they render decisions he disagrees with. One might have hoped that as a Yale Law School graduate, Clinton would have acquired a better understanding of the role of the judiciary than a former exterminator, but that was not the case.

Democrats across the board have ceded the setting of the parameters of the “activist judiciary” debate to the right. Democrats argue that a particular judge under scrutiny is not an activist rather than trumpet the historically sound position that all judges are activists and that all judges must sometimes issue orders that curtail the actions of government officials and the excesses of majorities. This is the case because every person or group that comes to court, whether a civil plaintiff seeking monetary damages or a government prosecutor hoping for a conviction in a criminal matter, requests a remedy from the judge (or the jury). The claimant may or may not get satisfaction, but the court always acts. Even when the judge denies the outcome the supplicant would like, the judge has acted. Put another way, not to decide is to decide. Had the Democrats and their friends outside Congress successfully blown away the fog of the “activist judiciary” controversy, the vital question exposed would be whether the judge, or judicial candidate, has the constitutional and humanitarian values that comport with the “history and traditions” of a free people, to paraphrase the words of the distinguished conservative jurist, the second Justice John Marshall Harlan.

The Democrats now stand on nothing more stable than a wetlands bog as they confront the affable persona of John Roberts. But affability, like intelligence, can mask a mean and meager spirit as well as the absence of a sense of proportion.

Judge Roberts has been quoted as taking pride in his ability to argue either side of any issue; so it is instructive to look at two important cases in which he was involved–one as a judge on the United States Court of Appeals for the District of Columbia and the other as an advocate on behalf of the United States–to see the dark and inequitable places his vaunted intelligence and decency led him–and ultimately the rest of us–regarding individual rights and constitutional protections. These two cases show that Judge Roberts, despite his Harvard pedigrees, abandons fundamental precepts of judging when it suits his right-wing agenda.

One criticism directed at Judge Roberts by civil liberties and pro-choice groups focuses on his successful urging of the United States Supreme Court to reverse two lower federal court decisions–one by the ultraconservative Fourth Circuit, no less–that had permitted abortion clinics to obtain federal restraining orders against Operation Rescue for its disruptive, destructive and intimidating behavior directed at the clinics and their patients. The lower courts held that a provision of the Federal Civil Rights Act, titled Conspiracy to Interfere With Civil Rights, allowed federal judges to issue injunctions against people who conspired to physically interfere with women seeking abortions at health care facilities.

The federal government was not involved in the lower court proceedings, but when the case reached the United States Supreme Court on the appeal of the anti-abortion forces, John Roberts and his then superior, Solicitor General Kenneth Starr, received permission from the Supreme Court to appear as amicus curiae. John Roberts presented an argument ultimately adopted by his former mentor, Chief Justice Rehnquist, and five other members of the Court–that the law did not protect women seeking abortions from this type of threatening activity. Roberts’ successful argument was that the statute, popularly known as the Ku Klux Klan Act of 1871, was designed to protect blacks from conspiracies directed against them by white-sheeted racists, but women enjoyed no such federal protection.

The law as written (42 U.S.C. 1985) (3)) makes no reference whatsoever to race or gender–or for that matter to the Ku Klux Klan. It plainly states that a denial of an individual’s civil rights occurs if “two or more persons in any State or Territory conspire or go in disguise on the highway or on the premises of another, for the purpose of depriving, either directly or indirectly, any person or class of persons of the equal protection of the laws, or of equal privileges and immunities under the laws.” So we see John Roberts, and the equally bland Kenneth Starr, concoct their own legally sanctioned conspiracy to lurch the office of the Solicitor General past the right flank of the Fourth Circuit Court of Appeals in order to ally the people of the United States with anti-abortion zealots and their private attorneys who designated themselves as “Christian Advocates Serving Evangelism.”

In advancing their anti-abortion beliefs, Roberts and Starr were able to persuade the Supreme Court majority to abandon the first principle of statutory interpretation: If the statute’s language is clear and unambiguous, it should be implemented as written. Moreover, the law assumes that successor congresses to the one that responded to the Ku Klux Klan activities in 1871 were aware of both the existence of the statute and the abatement of the KKK threat, but they obviously chose to leave the statute on the books. Roberts disingenuously claimed that the statute applied only to conspiracies directed at blacks and six members of the Court disingenuously agreed.

As a judge, one of his few reported decisions during his short tenure on the District of Columbia Court of Appeals was equally devastating for a mother and daughter seeking redress in the federal courts for a deprivation of federal rights, this time by law enforcement officers. In 2004, Judge Roberts was confronted with the claim of 12-year-old Ansche Hedgepeth, an African American, that she had been unlawfully arrested and detained by undercover police officers of the Washington D.C. Metropolitan Area Transit Authority. Ansche and her mother claimed that the conduct of the officers violated the Fourth Amendment declaration that people have a right “to be secure in their persons” and to be free from “unreasonable searches and seizures.”

What was Ansche’s crime? Eating food, specifically one French fry at a Washington, D.C. subway stop, in contravention of a local ordinance.

For her gustatorial effrontery, the police officers took Ansche into custody, handcuffed her behind her back, searched her body and her backpack, removed her shoelaces, and then transported her in a windowless van to a facility for processing and fingerprinting. Throughout this ordeal, the child was sobbing and crying. She was released to her equally distraught mother three hours later. In his decision, Judge Roberts noted the right and responsibility of courts to “inquire into the reasonableness of the manner in which an arrest is conducted,” before he went on to rule that the police officers had done nothing unconstitutional in dragooning little Ansche.

We may fairly ask what Judge Roberts thought was reasonable about the scope and nature of the search and temporary incarceration of this child. Did he think that the girl was concealing contraband catsup? Perhaps there was something about her and her overt display of a French fry that led the officers to conclude that she had a hand-grenade in her knapsack.

To justify this outlandish outcome, Judge Roberts pointed to a 2001 United States Supreme Court decision holding that it was proper for police to detain a woman for several hours in a local jail after her arrest for driving a car without a seatbelt on and without seatbelts around her toddlers. Though Judge Roberts noted other Supreme Court authority that said judges could analyze searches and seizures incident to otherwise lawful arrests if they are “conducted in an extraordinary manner, unusually harmful to an individual’s privacy or even physical interests,” he manifested a staggering inability to distinguish the potential threat to life and limb by a failure to “buckle up” from any perceived societal or individual harm caused by a school child eating a French fry in a subway station. We can also confidently assume that the average adult is more fit to endure a temporary restriction of liberty by police officers than is a 12-year-old child on her way home from school. To construct this Kafkaesque scenario, Judge Roberts ignored the indisputable fact that the Founders appended the Bill of Rights to the Constitution to curb and restrict governmental powers of both the legislature and executive. We are all in trouble if the right-wing’s constantly touted veneration of the Constitution’s authors leads to results like this.

John Roberts’ cold indifference to the claims of Ansche Hedgepeth and women seeking access to legally sanctioned medical procedures is appalling, but his genial personality conceals where his conscience resides. The soon-to-be Chief Justice John Roberts mistakenly believes that James Madison envisioned a Bill of Rights that countenances young girls being carted away by undercover police officers for eating French fries and that a Congress once concerned about the savagery visited on blacks by the Ku Klux Klan now wants women seeking medical assistance to have no recourse in the federal courts when they are bullied and assaulted by people who cross state lines to carry out their clearly stated intent to physically stop abortion.

During his testimony before the Senate Judiciary Committee, Judge Roberts, ever the clever advocate, used an all-American sports metaphor when he said that he saw himself as an umpire whose duty it was to call balls and strikes but not set the rules. The trouble is that umpires can vary the strike zone to make hometown calls–and home for John Roberts is the right-wing of the Republican Party.

Stephen J. Fortunato Jr. was as an Associate Justice of the Rhode Island Superior Court for 13 years. He is now an Adjunct Professor at the Roger Williams University School of Law.