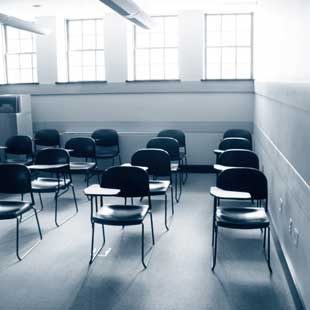 All for One, None for All

Portland, Ore.–On any given weekday here, the residential streets are clogged with parents driving their kids away from neighborhood schools. Harboring visions of creative and challenging academics, upwardly mobile mothers and fathers head for one of the district’s 20 special focus and language immersion schools, or other schools deemed superior by virtue of test scores or socio-economic enrollment patterns. As of two years ago, hundreds of Portland kids have also left their neighborhood school under No Child Left Behind (NCLB), the national education law under which schools that earn a “failing” designation must give students priority transfer to another district school.

Under the district’s open enrollment policy, over 35 percent of the Portland public school population now attends a school outside of their neighborhood.

NCLB and school choice policies are often touted as effective strategies to improve educational quality and close the achievement gap between low-income/minority and white middle-class students. But school choice in Portland has also exacerbated inequality, favoring savvy middle-class families at the expense of families in struggling communities. Theoretically, NCLB gives low-income students the opportunity to move to higher performing schools. In reality, the law means the kids who are left behind have even fewer resources than before.

“No Child Left Behind gives the illusion of choice, but it’s really about dismantling the schools,” says Elisha Williams, a senior at Jefferson High School, a predominantly African-American institution that lost more than 10 percent of its enrollment to federally mandated NCLB transfers last year. When struggling schools like Jefferson are labeled “nonperforming,” Williams says, families transfer to other schools, taking per capita government dollars with them. Williams also argues that high stakes testing mandated by NCLB fuels negative stereotypes about African American communities and encourages families to pull their kids from low-income minority schools. “That doesn’t seem like choice to me, but fear,” Williams says.

Williams is a member of Sisters in Action, a local nonprofit that develops leadership skills among young women of color. Last year, the Sisters launched a “Support our Schools and Neighborhood” campaign, calling on the school district to resist the NCLB mandate. The Sisters are not alone in their concerns. A growing number of parents, teachers and administrators have sounded the alarm about the impact of school choice on equity issues, as well as the long-term viability of public education itself.

“Most schools are harmed by school choice,” says Terry Olson, a former language arts teacher who ran for the Portland Public School Board in 2003. Designed to retain students who might otherwise attend private schools, the district’s array of special programs “has backfired,” says Olson. “It’s a questions of educational fairness. If families are allowed to transfer, the kids with the most involved parents and the most resources will be skimmed from lower class schools to places with ‘better’ test scores. Those schools lose their appeal, enrollment plummets and the schools become targets for closure.”

This year, Superintendent Vicki Phillips closed five schools and another six may be headed for closure in 2006. Over the past four years, district-wide enrollment in Portland has dropped by 4,500 kids. Although diminishing household size and rising housing costs are partially responsible for declining enrollment, demographic factors alone do not account for the exodus of families from the district.

From integration to liberation

U.S. public schools have always eerily replicated society’s racial and economic stratification, but the segregation caused by school choice is especially disturbing. First, thanks to urban revitalization efforts around the country, many inner-city neighborhoods are no longer defined by race and class. And yet, as these formerly languishing communities attract new–and wealthier–residents, the schools themselves continue to lose money, students and prestige. Second, although you can’t blame parents for wanting to send their child to the best school they can find, politically sanctioned choice policies facilitate, rather than mitigate the decline of urban schools.

“In the 1970s, school choice was considered a peaceful way to integrate the schools and encourage parental involvement,” says Peter Cookson, Dean of the Graduate School of Education at Lewis & Clark College. “The emphasis on school choice is now personal liberty and individual competition.”

Ask some of Portland’s transfer families why they left the neighborhood, and you’ll hear an invocation to academic achievement and freedom of choice. Consider Victoria Guillebeau, a self-described white middle class Portland mom who used the NCLB transfer provision to put her son in a special focus arts school across town. “I have a child who is very bright,” says Guillebeau, who opted out of the predominantly black neighborhood school because she didn’t consider it intellectually challenging.

“I think it’s great we have a transfer system that allows parents to pick schools that fit their kids better so they can grow up in a community of their choosing,” says Craig Williams, another parent who transferred his daughter from a predominantly African American elementary school–with decent test scores–to Hollyrood Elementary, a program rated “exceptional” by the Oregon Department of Education. “It truly gives kids a better opportunity to learn,” he says.

Miguel Salinas, a former principal and an advocate for poor and Latino students, begs to differ. School choice only works, he says, if parents have the ability to make informed decisions, an ingredient in short supply among the families he represents. “If a student is having trouble at Marshall High School [a failing school under NCLB], just picking up and transferring is seldom going to produce a positive result,” Salinas says. “I’d rather take a look at Marshall and say, ‘What is the capacity here? How do we build up the community as a real partner?’”

But how do you build up community when educational policies conspire to tear it down? As Olson points out, under Portland’s school choice system, two of the city’s poorest elementary schools, Humboldt and King, have lost 40 percent of their neighborhood student population to other schools. The city’s two richest schools, by contrast, Forest Park and Ainsworth, enroll more than 95 percent of their neighborhood population.

Elisha Williams speaks wistfully of a slate of new families who moved just across the street from Jefferson High School. “The people moving into our neighborhood don’t bring their children to our schools,” she says. “They take the opportunity to be part of this great area, but they’re not helping to benefit our school.” Jefferson, which enrolls fewer than 40 percent of the neighborhood population, is located next to the Mississippi neighborhood, a formerly redlined district that over the last two years has become one of the hottest destinations in the city.

Under NCLB, failing schools are required to set aside 20 percent of their federal funding for student transportation costs–to other schools. Federal funding should be used to support instruction, says Courtney Jones, another member of Sisters in Action, “not to give people bus passes so kids can leave our school.”

Two years ago, Portland school officials proposed a minor restriction to the school choice system that would have required parents to re-enter a school choice lottery after elementary and middle school. But those plans were axed after well-organized parents threatened to jump ship for private schools. A similar outcry occurred last spring in Seattle after school officials proposed restructuring of the decade-old school choice system. The idea was to revert to a more equitable neighborhood-based enrollment system. Around the same time, the Eugene, Ore., School Superintendent admitted his district’s choice system had allowed affluent families to create a cadre of “elitist” schools, leaving most neighborhood schools “browner and poorer.”

The long-term problem with choice is that it leads down the slippery slope to the demise of public education itself. (After all, the Bush administration’s initial plan was to support NCLB with school vouchers.) Nor can choice be divorced from the larger funding crisis facing public education. This year alone, the Portland district lost $35 million in local tax revenue and federal funding, leading to a loss of 250 teaching and classroom aide positions. As funding declines, parental shopping for special programs increases, fueling a spiral of decline.

In Portland, the irony is especially bitter. A city that is nationally recognized for its emphasis on community building and sustainability houses an educational system where schools are disengaged from neighborhood, where more kids have to be driven to school and where students are increasingly sorted by race, social class, interest and ability.

If that kind of custom education sounds familiar, it should. It’s called private school.

Linda Baker is a Portland-based journalist whose articles have appeared in the New York Times, and the Christian Science Monitor. Her two children attend the Portland public school in her Sunnyside neighborhood.