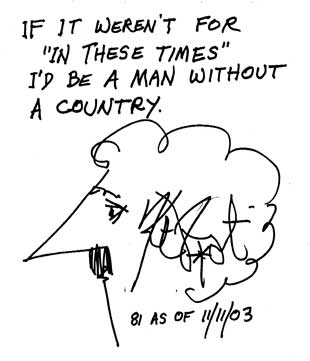 Kurt Vonnegut’s In These Times Opus

On November 11, In These Times Senior Editor Kurt Vonnegut will turn 83. Here at the magazine we raise our glasses.

He was 29 when he published his first novel, Player Piano, in 1952. Since then he has written 13 others, including Slaughterhouse Five, which stands as one of the pre-eminent anti-war novels of the 20th century and was his first best seller. His most recent best seller is A Man Without A Country, a work of nonfiction that came out in September, published by Seven Stories Press in New York. Portions of the book originally appeared in In These Times.

Below, we provide the links to some of the articles Kurt has written for the magazine, including an interview I did with him in January 2003, as the war against Iraq loomed. That interview became the most popular story at inthesetimes.com and was translated and reprinted in Aftonbladet, Sweden’s largest daily newspaper, and La Jornada, Mexico’s most respected daily newspaper.

Look for Kurt’s next contribution to In These Times in the issue that hits newsstands in December.

You have lived through World War II, Korea, Vietnam, the Reagan wars, Desert Storm, the Balkan wars and now this coming war in Iraq. What has changed, and what has remained the same?

One thing which has not changed is that none of us, no matter what continent or island or ice cap, asked to be born in the first place, and that even somebody as old as I am, which is 80, only just got here. …