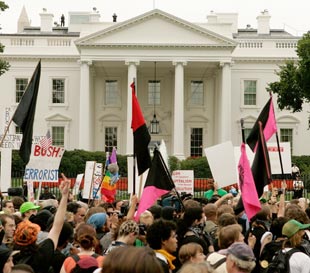 Is the left really as ideological and principle-driven as it seems?

The left falls victim to a debilitating affliction

A disease is running rampant through the American left these days. Its symptoms are intense and increasingly pervasive in every corner of the self-proclaimed “progressive” coalition. A good name for the disease could be “Partisan War Syndrome” - and it is eating away at what remains of progressives’ ideological underpinnings and the Democratic Party’s ability to win elections over the long haul.

The disease is simple to understand: It leads the supposedly “ideological” grassroots left to increasingly subvert its overarching ideology on issues in favor of pure partisan concerns. That may sound great at first glance. Democratic Party officials always talk about a need for “big tent unity” and subsequently try to downplay ideology. But as a trait of the grassroots and not just the party, Partisan War Syndrome could be positively devastating not just for issue advocacy, but also for Democrats’ political aspirations as well.

The main symptoms of Partisan War Syndrome are hallucination, delirium and obsessive compulsive behavior, with those afflicted losing almost all perspective about what winning politics really is all about. Washington, D.C., of course, could be declared a Hot Zone outbreak area, with this disease afflicting virtually every self-described strategist, operative, and lawmaker that operates in the progressive name. But it is starting to seep out everywhere-even on the Internet blogs that the mainstream media reflexively defines as the “left,” “liberal” or “progressive” base.

Certainly, this disease can be difficult to detect. The mainstream media regularly portrays the so-called Democratic base as a highly ideological, “liberal” or “progressive” monolith, supposedly pressing an insulated, spineless D.C. Democratic establishment to move to the “left.” This portrayal creates the image that there really is a cohesive, powerful ideological force on the left, one that is committed to convictions and issues before party-much like there is on the right. This image is reinforced by the mainstream media’s constant characterization of Internet blogs and the “netroots” as an extension of this monolith-as if a medium automatically equals an ideology.

As proof that such a monolith exists, the media writes stories about this or that Democratic politician-no matter how conservative he or she is - pandering to or courting the “left” by once in a while taking a mundane Democratic Party position and then blogging about it. We also see an entire counter-industry to this mythical monolith in the form of organizations like the Democratic Leadership Council, which raise corporate money, put out reports attacking the supposedly all-powerful “left,” and commission polls to discredit what, in reality, is a straw man.

And it is a straw man. To be sure, there used to be a powerful ideological force on the left that constituted the Democratic Party base. And there are still remnants of that ideological movement left in various progressive labor, environmental and civil rights organizations, and disparate Internet blogs. But look no further than the 2004 Democratic presidential primaries to see that the ideological movement as a whole is in tatters. In that race, primary voters - supposedly a representation of this “ideological” base -supported John Kerry on the basis of his personal profile as a Vietnam War veteran and his supposed “electability.” It was the most non-ideological of choices in what we were supposed to believe was the most ideological of races.

This blunting of the left’s ideological edge is a result of three unfortunate circumstances. First, conservatives spent the better part of three decades vilifying the major tenets of the left’s core ideology, succeeding to the point where “liberal” is now considered a slur. Second, the media seized on these stereotypes and amplified them - both because there was little being done to refute them, and because they fit so cleanly into the increasingly primitive and binary political narrative being told on television.

And third is Partisan War Syndrome - the misconception even in supposedly “progressive” circles that substance is irrelevant when it comes to both electoral success and, far more damaging, to actually building a serious, long-lasting political movement. This is the syndrome resulting from the shellshock of the partisan wars that marked the Clinton presidency. It is an affliction that hollowed out much of the Democratic base’s economic and national security convictions in favor of an orthodoxy that says partisan concerns and cults of personality should be the only priorities because they are supposedly the only factors that win elections. It is a disease that subverts substance for “image” and has marked the last decade of Democrats’ repeated failures at the ballot box.

Again, just look at 2004 for proof of Partisan War Syndrome’s negative effects: Kerry’s “profile” and “electability” - venerated by the supposed “ideological” base as the most important asset - were made impotent by the vicious attacks on his military service, and more importantly, by the fact that his lack of an ideological rudder allowed him to be vilified as a “flip-flopper.”

Some may argue that putting partisanship ahead of everything else during the 2004 presidential election was only a fleeting trait of a progressive base desperate to defeat George W. Bush. But a look at the left’s current landscape shows that’s hardly the case. Partisan War Syndrome rages on today like a pandemic in parts of the left’s grassroots base.

The first major symptom of Partisan War Syndrome is wild hallucinations that make progressives believe we can win elections by doing nothing, as long as the Republican Party keeps tripping over itself. You can best see this symptom each time another GOP scandal comes down the pike. The scandal hits, Republicans respond with a pathetic “I am not a crook” defense, and both Democratic politicians and grassroots activists/bloggers berate a “culture of corruption.” Yet, then these same critics largely refuse to demand concrete solutions such as public funding of elections that would actually clean up the system, and would draw a contrast between the left and the right. We see hallucinations of a victory in the next election as long as we just say nothing of substance, as we have for the last decade. But like a mirage in the desert, it never seems to materialize.

These hallucinations are the only logical explanation as to why the Democratic Party remains without an official position on almost every major issue in Congress. Just look at the last year: Democrats have no clear party position on Iraq, energy, bankruptcy, trade, tax cuts, Supreme Court nominees or corruption, other than to criticize Republicans.

In fairness, Iraq may be an exception when it comes to the grassroots. There is undoubtedly a palpable - and growing - core of progressives outside the Beltway who put their desire to see American troops withdraw above their partisan loyalties. Much of this base flocked to Howard Dean’s campaign for the presidency, and still fuels the blogs’ teeming traffic. It is why in recent weeks we have seen 2008 presidential hopeful Sen. Russ Feingold (D-Wisc.) make statements in support of withdrawing troops - because he feels the power of an ideological force within his midst, and he sees that in order for Democrats to capitalize on the Bush administration’s mismanagement of Iraq, Democrats have to actually take a position of contrast.

But then, even an issue as critical as Iraq can be subverted by the hallucinations that come from Partisan War Syndrome. As just one example, take progressives’ constant genuflecting anytime Sen. Hillary Clinton’s (D-N.Y.) name is mentioned. She is forever portrayed as a champion of the left, with everyone who’s anyone in politics assuming that she will have rock-solid support from the Democratic base despite her loud and continuing support for the Iraq War, and rather quiet Senate record on other progressive issues. The assumption speaks volumes about a “base” with an ideology so afflicted by a haze of hallucination that it believes the best politics even in such a polarized environment are those that avoid contrast.

On almost every other issue it is the same. The hallucinations subvert overarching ideology or concrete actions on issue after issue, save a few disparate pieces of token legislation that the party refuses to seriously push, and which the supposedly all-powerful “liberal” base does not demand through the blogs, liberal pundits, or any of its other powerful channels of influence. Unions, environmental organizations and others fight the good substantive fight. But with the base in a state of hallucination, there is no cohesive ideological grassroots movement to push along those substantive efforts.

As New York Times columnist Frank Rich recently wrote, the tragedy in allowing the hallucinations to continue indefinitely goes beyond just election losses. “The Democrats are hoping that if they do nothing, they might inherit the earth as the Bush administration goes down the tubes,” he wrote. “Whatever the dubious merits of this Kerryesque course as a political strategy, as a moral strategy it’s unpatriotic. The earth may not be worth inheriting if Iraq continues to sabotage America’s ability to take on Iran and North Korea, let alone Al Qaeda.” The same could be said for every other issue that progressives are trying to avoid in the face of the 2006 elections.

The next most obvious symptom of Partisan War Syndrome is delirium. Out of power for so long, the left is desperate for anyone that has the appearance of an electoral winner, no matter what the actual positions of that winner are. Other than maybe the war in Iraq or abortion, it increasingly does not seem to matter to the Democratic base where a candidate stands on much of anything, as long as that candidate has the so-called right “profile.” Intangibles like a candidate’s personal background and charisma - while certainly important - are now seen by parts of the grassroots as the penultimate asset for a candidate. In vogue today are macho males - tomorrow, who knows? As long as you are the “in” thing and put a “D” behind your name, much of the supposedly “ideological” base doesn’t really care what positions or record you have. It is as if progressives believe Democrats have been losing elections only because their candidates aren’t out of Central Casting.

What’s troubling is that this kind of delirium is most commonly found on the Internet blogs, supposedly the progressive ideological bastion, but increasingly a place only of traditional partisan prioritization. Case in point was the recent brouhaha over Ohio’s upcoming 2006 U.S. Senate race. Iraq War veteran Paul Hackett, who had recently lost a high-profile House race, decided to run for the Senate after Rep. Sherrod Brown earlier said he would not. Brown, however, reversed himself just as Hackett was preparing to announce his intention to run.