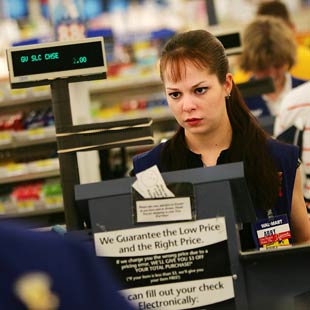 A cashier works at the checkout counter of a Wal-Mart Supercenter in Troy, Ohio.

Symbol of the System

What do you get when you cross gutted labor laws with a corporate culture of impunity? Why, Wal-Mart, of course!

Also in this Series

There’s a moment in Robert Greenwald’s new documentary, Wal-Mart: The High Cost of Low Price, that serves as a perfect metaphor for the entire battle between organized labor and the country’s largest private employer.

Josh Noble, an employee of the Tire and Lube Express division of a Wal-Mart in Loveland, Colorado, is attempting to organize 17 of his fellow workers into a union. As the National Labor Relations Board (NLRB) election approaches, we see Noble with a United Food and Commercial Workers’ (UFCW) advisor going through the list of employees, discussing who’s with them and who’s not. Noble says it looks about 50/50. Later, the organizer cautions Noble that he may have lost the vote of his friend Alicia. “No,” Noble says. “I’ve talked with her quite a bit. She’s just kind of hard to read … I hang out with her on the weekends. But she’s definitely into it. She’s real strong.” Cut to: Alicia Sylvia in her car. Management’s putting the squeeze on and she’s now equivocating. We know what will happen. It’s like watching David sent out to battle Goliath, blindfolded. Without a sling.

When election day finally rolls around Noble loses the election–17 to 1.

It’s not just that Wal-Mart has been winning the ongoing fight with the UFCW, which has been trying to organize the bulk of the company’s 1.2 million employees for the last six years. It’s that its dominance has been so absolute that even the small victories the union has scored have proved to be Pyrrhic. In 2000, when seven of 10 butchers in a store in Jacksonville, Texas, voted to join the UFCW, Wal-Mart responded by announcing that henceforth it would sell only pre-cut meat in all of its supercenters, fired four of the union supporters and transferred the rest into other divisions. (Three years later, the NLRB ruled the decision illegal. Wal-Mart is now appealing.) And in May this year, when workers at a store in Jonquiere, Quebec, voted to unionize, Wal-Mart simply shut the place down. “They wanted to send a message to every other store,” says UFCW spokesperson Chris Kofinis, “‘Don’t you dare unionize.’”

By any means necessary

There’s little secret to Wal-Mart’s success. The company will simply do whatever it takes to keep workers from organizing. “Staying union free is a full-time commitment,” reads one of the company’s training manuals. “[F]rom the Chairperson of the ‘Board’ down to the front-line manager … [t]he entire management staff should fully comprehend and appreciate exactly what is expected of their individual efforts to meet the union free objective.”

Managers are trained to call a special hotline at the first sign of suspicious behavior, including “employees talking in hushed tones to each other.” After the call, the company’s notorious labor relations division headquartered in Bentonville, Arkansas, will swing into gear, often dispatching a company jet to the afflicted store, bearing members of its crack team of union busters. Management will convene mandatory meetings with each associate and screen anti-union videos.

Former managers, like Stan Fortune, who worked for Wal-Mart for 17 years and then went to work for UFCW, say the store also illegally follows union sympathizers and spies on its employees with cameras in break rooms. “One of their favorite tactics is to say, ‘We need to freeze all raises in the store because it can’t appear that we’re bribing anybody,’ ” Fortune says in the film.

And then Wal-Mart will find a way to get rid of troublemakers. That’s what spelled the end of Fortune’s career as a manager at the company. In 2001 Fortune was managing a Wal-Mart in Weatherford, Texas, when his boss instructed him to fire an employee suspected of talking to the union. “I told him ‘I’m not firing him,’ ” Fortune says. “‘That’s illegal’ … He got in my face and said, ‘You fire him or I’m going to fire you.’ ” A week later, Fortune was gone. “I filed for unemployment and the state found I was fired without cause. That’s when I found out that means nothing in the real world.”

Since 1999 the UFCW and others have filed more than 300 charges against Wal-Mart with the NLRB, accusing the company of, among other transgressions, firing employees for suspected union activity in violation of the Wagner Act. In a third of these cases, the local NLRB office has issued a formal complaint and attempted to prosecute the company, but it hardly matters to the behemoth because even if the full NLRB rules against Wal-Mart, the resulting penalties are a pittance. Wal-Mart didn’t return calls for comment, but generally they deny ever breaking the law.

In April, the UFCW threw in the towel and decided to start from scratch. Instead of seeking to organize workers store by store, it launched WakeUpWalMart.com, a public awareness campaign designed to educate the public about Wal-Mart’s business impact and negative community effects. A coalition led by SEIU, Democracy for America and the Sierra Club has launched a similar project called WalMartWatch.com.

Wal-Mart deserves just about all the bad press it gets, and its recent commercials stressing what a gosh-darn great place it is to work would suggest that these efforts are having some effect. But because there’s been so much focus on Wal-Mart’s misdeeds, it’s easy to surmise that the company is a kind of outlier, and that the rest of corporate America would never stoop to such techniques. This is simply not the case. “The right to organize in the United States is on the verge of extinction,” says Andy Levin, director of the AFL-CIO’s Voices@Work campaign. “Wal-Mart’s not a bad apple–it’s the very symbol of a rotten system.”

A book-length report on U.S. labor practices released by Human Rights Watch in 2000 found that “workers’ freedom of association is under sustained attack in the United States, and the government is often failing its responsibility under international human rights standards to deter such attacks and protect workers’ rights.” Certifying a new union local through an NLRB election, which requires emerging victorious from several months of active campaigning by employers, 75 percent of whom hire union-busting firms, has become so difficult that unions hardly even bother anymore.

“If you look at the historical trends, 50 years ago, an average of 500,000 workers formed unions through the NLRB process every year,” says Levin. “And the number of workers whose rights were violated in that process, according to the NLRB, was generally in the high hundreds or low thousands. Fast forward to today. The private sector workforce is twice as large, but the number that organized through elections last year was 80,000. The number of workers whose rights were violated, according to the NLRB, is over 20,000. And that’s literally the tip of the iceberg. Most people’s rights are violated probably before there’s a union on the scene to file a complaint.”

Employers don’t have to break the law to be effective. They can legally require supervisors to actively campaign against the union upon pain of termination and they can require employees to attend one-on-one pressure sessions with their bosses. “No other industrialized democracy allows this,” says Levin. But even if they do break the law there are no punitive damages or large fines. In fact, employers simply have to give back pay minus what the fired employee was making at his or her subsequent job. “Many employers have come to view remedies like back pay for workers fired because of union activity as a routine cost of doing business,” says the Human Rights Watch report. “As a result, a culture of near-impunity has taken shape in much of U.S. labor law and practice.”

For several years, Levin and others at the AFL-CIO have been attempting to build support for legislation that would chip away at this “culture of near-impunity.” The Employee Free Choice Act, which currently has 204 sponsors in the House and 40 in the Senate, would legally recognize a bargaining unit if a simple majority of workers signed a card endorsing unionization. It would also create binding arbitration for the first contract a newly certified union negotiates, and increase penalties for employer violations. Similar legislation has come close to passing in the past, but has often fallen victim to filibusters from corporate friendly senators.

Such legislation isn’t necessary in countries where workers’ rights are already protected. In Germany, Wal-Mart has bought out several stores that were already unionized, and they have stayed unionized. Since Wal-Mart isn’t in the charity business, it’s safe to assume those stores are quite profitable. In the film, Greenwald interviews workers there who proudly speak of health benefits and six weeks of paid vacation. One woman says she doesn’t understand–why can’t her American colleagues form a union?

Research assistance for this article was provided by Robert Greenwald, the producer/director of Wal-Mart: The High Cost of Low Price. In an unprecedented journalistic collaboration, The Nation, The American Prospect and AlterNet will also tackle stories and themes showcased in the film.