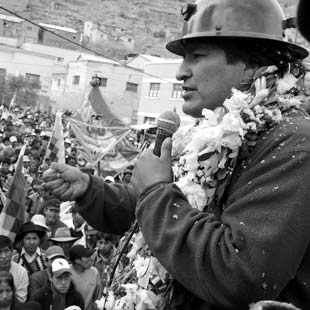 Bolivian presidential candidate Evo Morales, speaks to a crowd of miners in the town of Huanuai on October 6, 2005. (Credit: Noah Friedman-Rudovsky)

In June Paraguay’s legislature gave the green light to the U.S. military for a series of 13 joint exercises to run through December 2006.

Then the rumors began appearing in the Latin American press: The United States was moving to establish a military base at Mariscal Estigarribia, a town in Paraguay just 124 miles from Bolivia’s southeast frontier and within easy striking distance of Bolivian natural gas reserves, the largest in the Americas. Anywhere from 400 to 500 U.S. troops were said to be arriving.

In late July, Brazil reportedly launched military maneuvers along the Paraguayan border, a move seen as an expression of Brazilian discontent with Paraguay. More vocally, Brazil’s foreign minister Celso Amorin drew a line in the sand: “Paraguay must understand that the choice is between Mercosur and other possible partners.”

Brazil and Argentina lord over Paraguay in the Mercosur trading bloc with a dominant import-export relationship. They don’t want to see their leverage compromised if Paraguay gains preferred access to the U.S. market for its textiles (hinted at recently) and drops out of the Mercosur trade partnership.

But Bolivia has the most to fear from a U.S. military base in Paraguay. With national elections slated for December 5, the Andean nation is expected to become the next Latin American flashpoint. Since October 2003, widespread indigenous peasant uprisings have ousted two presidents. Quechua and Aymara Indians make up the majority of the Bolivian populace, and they’re pressuring the central government to halt the forced eradication of coca cultivation and to nationalize the country’s natural gas reserves. Evo Morales, presidential candidate for the Movement Towards Socialism, or MAS party, made a meteoric rise onto the international political stage by supporting these goals, in open defiance of Washington. Considered by many analysts to be the frontrunner, Morales’ main competition is former president Jorge Quiroga Ramírez, the preferred candidate of the United States.

Both the U.S. Embassy and Paraguayan President Nicanor Duarte Frutos emphatically deny plans for a U.S. base.

“There have been these joint exercises since 1943,” Bruce Kleiner, U.S. press attaché in Asuncion, told In These Times. “The only difference is this time they authorized 13 at one time, for expediency.”

The hand-wringing grew more intense in August, when Defense Secretary Donald Rumsfeld arrived in Asuncion and met with Duarte Frutos, partly to discuss Cuba and Venezuela’s “unhelpful” and growing influence in Bolivia. As a senior defense department official told reporters, “The challenge … is to help the Bolivians steer this situation to a democratic outcome.”

Rumsfeld’s comments fueled suspicions that the United States was making a move to block Morales’ rise to power, or at least stifle any move he might make to nationalize gas reserves at the expense of U.S. corporations. U.S. officials have also said that the three-borders region, where Paraguay, Brazil and Argentina meet, is home to financiers of Islamic terrorist groups, but presented no strong evidence to back this.

Jorge Ramon de la Quintana is a former Bolivian military officer who spent three years in the Defense Ministry conducting political analyses of national defense strategies. He says the confluence of all of these factors is ominous.

“I don’t believe in the arguments being put forth by the Secretary of Defense or the Embassy in Asuncion,” Quintana told In These Times. “The military presence in Paraguay reflects a series of perceived threats by U.S. Southern Command.”

Quintana says the main motivation to invade Bolivia would be to stop the spread of socialism. With Hugo Chávez enjoying broad support internationally, and left-leaning presidents at the helm in Brazil (Lula da Silva) and Argentina (Néstor Kirchner), Washington is finding its backyard increasingly insubordinate and difficult to control. The last thing the State Department wants to see is Morales, a good friend of Chávez, taking over. Strong socialist movements might develop next in increasingly unstable Peru and Ecuador. “This is the return of the Domino Theory,” says Quintana.

But Paul Sondrol, an academic expert on Latin America at the University of Colorado at Colorado Springs, says all this talk of impending intervention is rubbish. “There are no designs on Bolivia’s natural gas: it’s an urban legend,” he says. However, Paraguay does have a legitimate problem with outlaws in the tri-border area. According to Sondrol, Paraguayan military officers sell everything from weapons systems to hot Mercedes sedans on the black market here.

“Paraguay’s democracy isn’t stable, and it’s probably getting worse,” Sondrol said. “I’d guess Paraguay is asking the U.S. to come in as much as the U.S. is asking ‘Can we send some troops down there?’ “

Council on Hemisipheric Affairs Director Larry Birns, a personal acquaintance of President Duarte, has backed off initial reports of the presence of 500 U.S. troops. He told In These Times there are no plans at this moment to build a big U.S. base in Paraguay, but he worried that the denials being issued sound identical to the ones that predicated an escalation of U.S. military activity at the airbase in Manta, Ecuador.

“Paraguay is interesting for what it could become,” says Birns.

Bolivia’s MAS party has been careful not to add to the chorus of shrill protestations. “Though I have heard many things, it’s important to look at this with a cool head,” says Álvaro García, Evo Morales’ vice-presidential running mate. “I’ve seen no evidence to suggest they have an intention of setting up a base in Paraguay.”

García says the information he’s seen indicates that the airstrip at Estigarribia lacks the support infrastructure needed to become a full-blown military base, such as taxiways, hangars and barracks. However, he admits that the airfield’s proximity to Bolivia’s natural gas reserves is “worrying.”

“But what gives us greater worry is, we don’t know if this is merely joint exercises, or the beginning of establishing a greater presence or base,” Garcia said. He echoed, perhaps unwittingly, the sentiments of Argentine Nobel laureate Adolfo Pérez Esquibel, who remarked: “Once the United States arrives, it takes a long time to leave … and that really frightens me.”

Adam Saytanides is a producer for NPR's "Latino USA," based in Austin, Texas.