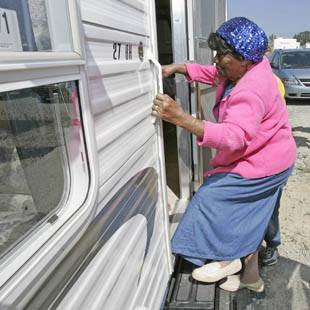 New Orleans residents displaced by Katrina, like Mary Elizabeth Johnson, above, may find it difficult to vote in upcoming elections.

When Hurricane Katrina came ashore in New Orleans, it destroyed half the city’s voting precincts and scattered 300,000 of the city’s residents, most of them black, across the country. With citywide elections still scheduled in February and March for 20 key public offices–including mayor, criminal sheriff, civil sheriff and all city council members–restoring the city’s democratic capability might seem an urgent task to some, but not to the Federal Emergency Management Agency (FEMA).

Because many evacuees are far from New Orleans and cannot make a special trip home for the elections, their only way to vote will be by absentee ballot. But, citing privacy concerns, FEMA stonewalled Ater for weeks. They finally reached an agreement on November 8, but it is an open question if the compromise will lead to fair elections.

Ater has also requested $750,000 from FEMA for a Nationwide Voter Outreach and Education Campaign.

“Given the inability of the displaced voters of Louisiana to receive local election information via their local news, some kind of extraordinary outreach should be made to educate those voters,” says David J. Becker, election consultant and former senior trial attorney for the voting section of the U.S. Department of Justice. “Otherwise their voting rights may be yet another victim of Hurricane Katrina.”

Many evacuees have moved several times since they first applied for assistance, and they may never receive voter information unless they learn by word of mouth or through the media to contact Ater’s office for ballots. Consequently, Ater is proposing a publicity campaign that would include direct mail, radio and TV public service announcements, satellite media tours and travel for himself and staff members to areas with high concentrations of evacuees.

Why should FEMA pay for this? The Stafford Act, which gives FEMA its role in coordinating relief efforts, provides that FEMA may make contributions towards the repair of damaged public facilities and provide “technical and advisory assistance” for “the performance of essential community services.”

On October 5, Ater asked FEMA’s liaison to his office, Arvin Schultz, for FEMA’s list of evacuees. Schultz responded On October 14 to Ater’s requests with a terse e-mail, writing that FEMA “will not fund the outreach program. They will not let you have a copy of the FEMA applicant list. Sorry!!!” Two days later, Ater appealed to Deputy Federal Coordinating Officer Scott Wells, the top FEMA official in Louisiana. Ater’s appeal was rejected, this time with the rationale that releasing the list of evacuees would violate the Privacy Act of 1974.

Ater then went to Washington, D.C., to negotiate with FEMA and lobby Louisiana’s representatives and senators to push the agency to reverse its decision. He suggested a compromise: FEMA could take the voter rolls from him and mail the election materials itself to avoid disclosing the evacuees’ addresses. Though FEMA said it wanted to work with Ater, agency officials dragged their heels for nearly two weeks. FEMA Spokesman Butch Kinerney says the main problem was “mechanical questions” about the best method for reaching voters while protecting privacy.

On November 8, FEMA finally made a clear concession. The agency said it would pay to send a one-page flyer to all evacuees that would explain voting rights and include ways to contact Ater’s office. Yet, Ater still does not know when FEMA will mail the flyer.

In contrast, the agency responded quickly to share the same information with law enforcement. At the end of September, Texas law enforcement officials began asking FEMA for the list of evacuees in order to determine where sex offenders evacuated from Louisiana might have landed in Texas. By the middle of October, FEMA declared that while it would not release all of the names and addresses, it would cross-reference the evacuee list with the sex offender list for any legitimate law enforcement agency that requests it. In order to expedite the process, FEMA now provides law enforcement agencies with a form letter they can use to ask FEMA to identify sex offenders from Louisiana who have fled to their communities.

Reshaping the Voter Base

Despite FEMA’s compromise with Ater, the agency is still flouting the Equal Protection Clause of the Constitution and the Voting Rights Act of 1965. Without the means to carry out his Nationwide Voter Outreach and Education Campaign–and to do so expediently and over enough time to be effective–it will be impossible for Ater to ensure that thousands of displaced voters do not face an undue burden in securing their right to vote. The current mechanism for reaching displaced voters by mail is essential, but it is not enough. “You can’t expect the average person to be an election law expert and to know what to do,” says Ater.

“For lawyers who do voter protection work to ensure that every vote cast is counted, it’s going to be a very challenging election,” says Judith Browne, co-director of the Advancement Project, a group founded to promote racial justice and democracy, and co-chair of the Legal Committee of the People’s Hurricane Relief Fund and Oversight Coalition, a grassroots movement of persons disproportionately impacted by the hurricane. “If there is an absentee ballot campaign, protections must be put into place. There is concern that the kind of voter suppression we saw directed at people of color in Ohio in 2004 will be directed at Katrina victims in the upcoming elections.”

In Ohio and other states, low-income black voters were vulnerable to partisan challenges to their registration status because they were least likely to have identification and most likely to change residences between election cycles.

Evacuees will be considerably more vulnerable as targets in the upcoming high-stakes elections. “If the Republican Party had long lists of people to challenge at the polls in 2004, what kind of action will we see around many thousands of absentee ballots in 2005 and 2006?” says Browne.

Black voters are not the only ones facing the hardships of relocation, but they are the group most affected by Katrina. At the end of October, Gallup released a survey of evacuees that showed that “the differences between racial groups were, on average, much larger than the differences between high- and low-income groups.” While there are no hard numbers for how many of the 300,000 New Orleans evacuees are black, it appears to be well over two-thirds. Pre-Katrina New Orleans had a population of 500,000, of which nearly 70 percent was black.

Today, the city is down to an estimated 70,000 residents (including contract workers). The most populated areas are the predominantly white districts nearest the Mississippi River–Uptown, the Lower Garden District, Warehouse District, French Quarter, Marigny–while areas such as the Lower Ninth Ward, which were more than 90 percent black, are being kept near empty by police, military and paramilitary forces.

With 73 percent of New Orleans residents over the age of 18, according to Census 2000, roughly 219,000 of the New Orleans evacuees should be of voting age. If we estimate conservatively that 70 percent of those evacuees are black, that’s 153,300 black voters whose poll tapes FEMA is replacing with red tape. This is voter disenfranchisement by attrition. There may not be visible long lines outside of polling places, but the scale is much larger than anything in Ohio or Florida.

“Many who were residents of New Orleans and who want to go back were not registered voters,” says Browne. “These folks are outraged by the government’s inadequate response to the flooding and are passionate about these issues now. They want to vote.”

Benjamin Greenberg is a poet, journalist, activist and author of the blog Hungry Blues, which is dedicated to the legacy of his activist father, Paul Greenberg, former Special Assistant to Dr. Martin Luther King, Jr. He is also a member of the Dollars and Sense Collective.