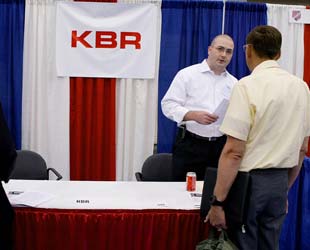 Help wanted: Kellogg Brown and Root has nearly 60,000 workers in the Gulf.

Road to Riches or Ruin?

Army recuitment may be down, but economic hardship keeps the troops of Halliburton at high levels

“What do you think my wife would rather have,” Ivil asks. “A hundred thousand dollars or me?”

It’s hard to tell if he’s kidding. In the space of 24 hours, Ivil saw four TV news reports about a Kellogg Brown and Root (KBR) job fair being held in Tampa and he thought of his son, who is only two years away from college. This graying African-American family man decided that $75,000 to $100,000 a year–with the first $80,000 tax-free if he lasts the entire year–was too much to pass up. So on August 18 he snuck out of the house and came to the Crowne Plaza Hotel to try and get hired as a truck driver in Iraq or Afghanistan.

KBR, a subsidiary of Dick Cheney’s infamous former company Halliburton, is in the third year of a 10-year contract with the U.S. military. According to the Washington Post, by May of 2006, KBR will have received more than $11 billion for work related to LOGCAP (the Logistics Civil Augmentation Program), which pays for, among other things, chefs, electricians, mechanics, medics, laundry, pest control, construction and water purification workers.

On November 4, U.N. auditors called on the United States to repay Iraq $208 million that had been paid to KBR from Iraqi oil proceeds for services that the auditors found to be overpriced, lacking proper documentation and awarded non-competitively. While much of that money surely ended up in executive paychecks, it’s also helped KBR become an attractive employer with 200,000 job applications on file.

The cardboard display on the table outside the hotel conference room promotes benefits like “integrity,” “adventure” and “pride,” but “the money is the big draw,” says Dale, another of about 60 KBR hopefuls at this afternoon’s session, which consists of an hour-and-a-half long presentation by Peter Howatt, a recruiter with KBR’s special projects group. Six other recruiters out in the hallway sift through resumes while Howatt lays out a far more realistic scenario than the military presents to army recruits. “We don’t pull any punches,” Howatt told In These Times. “People know exactly what they are getting themselves into.”

For the most part, the Vietnam veteran stays true to his word. In the first 10 minutes of his talk, Howatt provides his audience with the official KBR contractor death toll in Iraq and Afghanistan (68 at the time). He tells the applicants that they’ll be working 12 hours a day, 7 days a week, with 10 days off every 4 months. After a short film showing construction of a tent city in the desert, he advises the room full of military veterans, former Halliburton/KBR employees and average Joes and Jills (complete with a crying baby in the back) that if they are killed in an NBC (nuclear biological or chemical) attack and their remains are contaminated, they won’t be flown home to their families. Instead, they will be cremated.

But heads perk up at the mention of salary, and Howatt’s sales pitch to the group is tight: “If you owe back taxes, call the IRS, tell them you are gonna go overseas, make a ton of money, and they’ll be glad to let you go. Same with child support.”

David, a prematurely balding military vet who served in the Balkans, doesn’t specify who he owes, but stresses, “I got a lot of bills to pay, and I can only make so much and do so much here.”

As of January 1, starting pay in the U.S. army will range from $15,282 to $27,464 per year. Although Howatt was reluctant to acknowledge that the military isn’t meeting their recruiting goals, he admits that a poor economy “add[s] to our ability to go out and attract the right people.”

Hiring private contractors to perform what were formerly military tasks has several advantages. Employees can be terminated at any time, and the government doesn’t have to include contractor casualties in the war’s death toll (over 400 in Iraq, with injuries numbering about 4,000). Perhaps most importantly, Americans not eligible for military service–like Ivil, who couldn’t fight in Vietnam because he was classified 4F–can still become part of the war effort.

Howatt informs the nervous applicants that many of them will be hired by the end of the afternoon, and others may receive calls in the next few weeks. His goal is to hire 75 to 100 people in the three days he’s in Tampa, then move on to the next town and do it all over again “We currently have between 50,000 and 60,000 people over there now,” he says. “We’re also getting orders to increase the number of hires that we make. We’re still sending 200 to 300 a week. No end in sight.”

Another benefit of working for KBR is that supporting the war is optional. Howatt told In These Times that even with the growing antiwar sentiment, he’s seen no change in application numbers, and in fact, he doesn’t care one way or another what KBR employees think, as long as they do their jobs. “Everyone has different feelings about the war,” he says. “But your commitment to support the troops over there is to me a separate issue.”

Gary, a fresh-faced Latino who was lucky enough to get hired for a food crafts position, says he doesn’t really like Bush. “It’s not really about him. I’m doing it for my family. Bush still hasn’t really given us a good reason why we’re in war.”

Gary is not alone. Angie, who drove all night from Atlanta to the job fair, is hoping to get hired so she can pay her bills. She also wants to see her husband, who’s been working for KBR in Iraq since April. Although she feels the U.S.-led invasion has “done enough damage,” she doesn’t think that working in Iraq would be tantamount in any way to supporting what she calls “a holy war.”

“I believe a good part of this [war] is driven by security of our energy supply,” says Dale, a grizzled loner who’s worked on offshore rigs in the Caribbean and hopes to do the same in the Persian Gulf. As for the danger posed by the snipers he hears about on the news, he looks on the bright side. “More than likely they’re going to be shooting from a great distance so they’re gonna probably miss.”

He compares Iraq in 2005 to Alaska in the late 1800s. “We don’t have gold mines to go to in the Klondike, but this is an opportunity that’s very similar to that, and those that have the balls can go after it.”

Dale notes another parallel between gold rush prospectors and KBR’s truck drivers. “There was a great percentage that didn’t make it and died on the road.”