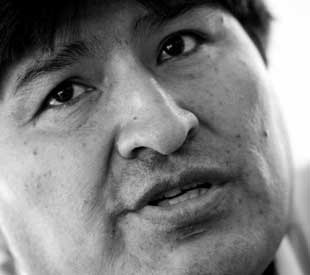 Evo Morales Has Plans for Bolivia

Evo Morales is a polarizing figure in Latin American politics: a proudly left-leaning indigenous activist who defends the traditional rights of peasants to grow coca and describes the Free Trade Agreement of the Americas as “colonization.” While opponents have labelled him a “narco-trade unionist,” the charismatic Morales enjoys widespread popular support. As In These Times went to press, he was expected to win the special December 18 Bolivian presidential election. His election would place him in power alongside other Latin American leaders who are critical of America’s neoliberal economic agenda: Hugo Chavez of Venezula, Lula de Silva of Brazil and, of course, Fidel Castro in Cuba.

Morales’ upbringing shaped his political philosophy. The son of coca farmers, he was raised in the barren altiplano region, where he worked as a coca farmer and llama herder before rising to power as the national leader of the coca-growers union. In 1995, he founded MAS (Movimiento al Socialismo), an indigenous-based political party that calls for the nationalization of industry, legalization of the coca leaf (the main ingredient of cocaine) and fairer distribution of national resources. Morales ran for president in 2002 on the MAS ticket, losing to the heavily favored Gonzalo Sanchez de Lozada by two percentage points.

A major plank in his current platform is to convene a “constituent assembly,” that would re-write the country’s Constitution with input from the indigenous groups that make up approximately 62 percent of the population, but who only won the right to vote in 1952. Morales is an Aymara Indian, and many observers note that MAS has successfully brought together two strands of the left–the indigenous and the liberal–in one party.

The political climate in Bolivia is tense. This presidential election comes after June protests against an oil export deal that forced the resignation of then-President Carlos Mesa. These protests were only the most recent: In 2000, protests in the city of Cochabamba stopped the IMF-mandated privatization of the public water system, and in 2003 protests erupted in La Paz over a tax increase aimed at the poor. If Morales wins less than 50 percent of the popular vote, the election will be decided by a congressional vote in January, and critics say that he has moved to the center in an attempt to win. But when In These Times spoke with Morales in early November, he was sporting a Che Guevara t-shirt, and his resolve to equalize access to the country’s resources was clear.

What is the most important issue that you plan to address as president?

The most important thing is to create public well-being, to combat poverty and take care of our natural resources. To form a government is to form a family that will work together to eliminate poverty. In this project the state has to be a central actor, generating development, housing, sports and so on.

The state has to be the motor: We will nationalise the forests and the petroleum and natural gas reserves. In several cases the management of the companies has been disastrous. To develop the country, we have to get rid of the colonial and neoliberal model. We want to tax the transnationals in a fair way, and redistribute the money to the small- and medium-size enterprises, where the job opportunities and ideas are. To get this on its way, we want to create a development bank. The properties of big land owners will have to be redistributed; we’ll respect the productive land, but the unproductive land must be handed out to landless peasants–this will start a true process of economic redistribution. We also want to industrialize and give people more access to technology.

We want to govern with our indigenous ancestors’ models: That means a different concept of participation, community work and honesty.

How important is the Constituent Assembly?

The Constituent Assembly is our number one priority and main proposal in the campaign. The majority of people in this country–people from more than 30 indigenous groups–did not participate in the foundation of Bolivia in 1825. We have to re-found Bolivia in order to end the colonial state, to live united in diversity, to put all our resources under state control, and to make people participate and give them the right to make decisions.

If I become president, I have to swear to respect the laws–and if the laws are neoliberal, I can’t do that. Our constitution says that Bolivia is a multiethnic democratic country, but that is only in theory. If we win we have to change the country, not only in theory but in reality.

What will the process of transforming political representation look like?

We would like to have elections for the Constituent Assembly six months after these [December] elections. Bolivians will elect three people from each district, which would constitute a parliament of around 200 members. Then the assembly will have to work for some months, after which their proposals will be voted on in a public referendum.

But we have to see how this goes. The minority in this country are not going to give up the baby bottle easily.

What are you going to do about Bolivia’s external debt?

We will ask for the total [forgiveness] of the debt, negotiating with the World Bank and the IMF. We are looking into the possibility of presenting a demand that Bolivia be compensated for genocide and 500 years of oppression and violations of human rights. It would be a historic thing to do, especially for an indigenous government.

How about the world outside Bolivia? What do you think about what is happening in Latin America right now?

I respect Cuba a lot. When it comes to Che Guevara, our only difference is the armed struggle–I don’t accept armed struggle. Maybe it was the way in the ’50s and ’60s, but we want a democratic revolution.

There are many progressive leaders in Latin America right now; presidents like Fidel and Chavez, but also Kirchner [in Argentina], Lula and Tabarez Vasquez [in Uruguay]. The social movements are very strong and interesting and they move from union struggle, to local, to national struggle. If the 19th century belonged to Europe and the 20th century to the United States, the 21st century will belong to America, to Latin America. I have a vision of integration, like the European Union, with a single market and a single currency and with the corporations subordinate to the state.

I am sure that America would be better off without the United States and the IMF controlling all of its resources.

Right now [in Bolivia], people power exists in theory, but not in practice. That has to change. If I become president Bolivia will support ALBA [Alternativa Bolivariana para las Américas], the alternative to FTAA that was launched by Venezuela. Of course, everyone would like free trade but as long as the world is so unfair, free trade is not combating poverty but combating the poor.

What is your political history?

I have gone from social struggle, to trade union struggle, to local politics and then to national politics. I am candidate for president because the people want me to be. We are the most militant force against neoliberal politics. The trade union I was heading [the Federation of Coca Farmers] is in daily direct confrontation with the United States, which controls our country under the pretext of fighting against drug trafficking.

What many people don’t understand is that the coca leaf is an important part of our culture. Zero cocaine cannot mean that zero people work with the coca leaf. Right now we have an international campaign to take the coca leaf off the United Nations list of drugs; the coca leaf is not a drug, it is a healthy herb.

What is your strategy to avoid confrontation with the United States?

Condoleezza Rice has said that she is “very worried” about you being president of Bolivia. What is your reaction to that?

That is part of intrusive U.S. politics: their constant threats, repression and lies. The White House says that I’m a drug trafficker who belongs to the mafia, that I receive money from Fidel and Chávez. Ridiculous! Luckily, the Bolivian people don’t believe them.

Is there a risk that they will try to declare the elections unconstitutional if you win?

America Vera-Zavala is a Swedish journalist who writes regularly on economics and participatory democracy.