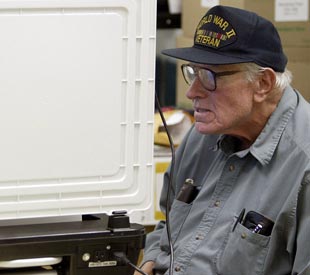 Lennard Pearson, 81, casts his vote in the US presidential election using a electronic touchscreen voting machine in monterey Park, Calif. in 2004.

Ghosts in the Voting Machines

Concerned about reports of election fraud and vote suppression in the 2004 election, Rep. John Conyers (D-Mich.), the ranking Democrat on the House Judiciary Committee, asked the Government Accountability Office (GAO), the investigative arm of Congress, to examine the allegations. In September, the GAO released a report that found electronic voting systems “have caused local problems in federal elections–resulting in the loss or miscount of votes.” In the 2004 general election, about 64 percent of voters cast ballots on one of two types of electronic voting systems: optical scan systems, which read marked paper ballots, and direct recording electronic systems (DRE), which have a touchscreen that voters use to make their choice.

The GAO highlights one major problem with electronic voting systems: They can be hacked because of woefully inadequate security systems.

The report notes, “Regarding key software components, several evaluations demonstrated that election management systems did not encrypt the data files containing cast votes (to protect them from being viewed or modified). …If exploited, these weaknesses could damage the integrity of ballots, votes and voting system software by allowing unauthorized modifications.”

The report goes on to say that flaws in electronic voting security protections “could allow unauthorized personnel to disrupt operations or modify data and programs that are critical to the accuracy and the integrity of the voting process.”

The report cites these examples:

Because elections are overseen by the states, the federal government is unable to mandate electoral procedures. So the GAO called on the Election Assistance Commission (EAC), the four-member presidential commission established by the Help America Vote Act (HAVA), to implement voluntary reforms and safeguards such as establishing security standards and a national program to certify electronic voting systems. However, the GAO notes “important initiatives are unlikely to affect the 2006 election due, at least in part, to [Bush administration] delays in appointment of EAC commissioners and in funding the commission.”

The GAO concluded: “Until these efforts are completed, there is a risk that many state and local jurisdictions will rely on voting systems that were not developed, acquired, tested operated, or managed in accordance with rigorous security and reliability standards.”

Rep. Conyers responded to the report this way: “I am shocked at the extent and nature of problems that GAO has identified. … It is incumbent upon Congress to respond to this problem and to enact much needed reforms such as a voter verified paper audit trail that protects all Americans’ right to vote.”

Few people are as familiar with running fair elections as he. The Carter Center has monitored more than 50 elections worldwide.

In a September 2004 Washington Post article, Carter predicted that the looming presidential election would be as contentious as the one in 2000, with Florida again at the center of the storm. He wrote that “some basic international requirements for a fair election are missing in Florida,” the most “significant” of which were:

“With reforms unlikely at this late stage of the election, perhaps the only recourse will be to focus on maximum public scrutiny on the suspicious process in Florida,” he wrote.

As Carter predicted, in 2004 Florida again featured prominently, if less publicly, as a state where incidents of voter suppression and alleged election fraud tilted the vote toward George W. Bush. But the big story in 2004 was the swing state of Ohio, where the presidential election is thought to have been decided.

Carter weighed in again, in September 2005, when the Commission on Federal Election Reform released its report. Carter and James Baker III, co-chairs of the commission, wrote in the report’s introduction: “We propose ways to give confidence to voters using electronic voting machines that their votes will be counted accurately. We call for an auditable backup on paper at this time.”

The commission report states: “Congress should pass a law requiring that all voting machines be equipped with a voter-verifiable paper audit trail … This is especially important for direct recording electronic (DRE) machines for four reasons: (a) to increase citizens’ confidence that their vote will be counted accurately, (b) to allow for a recount, (c) to provide a backup in cases of loss of votes due to computer malfunction, and (d) to test–through a random selection of machines–whether the paper result is the same as the electronic result.”

On October 28, New York University professor Mark Crispin Miller met Senator John Kerry at a political event and gave him a copy of his new book about the 2004 presidential election, Fooled Again. In a November 4 interview on Amy Goodman’s “Democracy Now!” radio show, Miller said: “He told me he now thinks the election was stolen … He said he doesn’t believe that he is the person who can go out in front on the issue because of the sour grapes … question.”

While writing the book, Miller learned Kerry was persuaded to concede the election by his top advisers, particularly Bob Shrum. However, Miller says, John Edwards wanted to hold off conceding until they had more information. According to Miller, Kerry called Edwards and said, “They [his advisers] say that if I don’t pull out, they, [Kerry’s political opponents] are going to call us sore losers.” To which Edwards replied, “So what?”

According to Kerry spokeswoman Jenny Backus, none of the conversation Miller reported on “Democracy Now!” occurred. She told Raw Story Web site, “I know Mr. Miller is trying to sell his book … but his recent statements about his conversation with Senator Kerry are simply not true.”

Yet Miller isn’t the only person Kerry reportedly voiced concerns to. Robert Parry, who as a reporter for Newsweek in 1987 helped break the Iran-Contra story, reported on ConsortiumNews.com that Kerry “suspects that the election was stolen, but that he didn’t challenge the official results because he lacked hard proof and anticipated a firestorm of criticism if he pressed the point.”

Jonathan Winer, a former longtime Kerry adviser and a former deputy assistant secretary of state, told Parry, “Kerry heard all the disquieting stories, but he didn’t have the evidence to do more.” Winer said that “disquieting stories” include Republican election officials in Ohio providing an inadequate number of voting machines to heavily Democratic precincts and reports from voters who said that when they cast their ballots on DRE machines they saw their vote transferred to Bush. On top of that, Winer said, Kerry was mindful of what happened after Gore won the popular vote but lost the election, when five Supreme Court Republicans stepped in and stopped the recount.

According to Winer, Kerry didn’t believe evidence existed that could prove the 2004 Bush/Cheney Campaign committed election fraud. Further, Kerry knew he would be harshly criticized if he challenged the election results without compelling proof that a crime was committed.

“The powers in place would have smashed him,” Winer said. Like Miller, Winer reported that Kerry suspects that the electronic voting machines were possibly tampered with.

Winer, now an attorney specializing in information security, told Parry it is conceivable that Republican operatives hacked the DRE voting systems in 2004. Without the confession of a credible witness, he noted, such crimes would be hard to prove. “There are systems for one-time use that erase themselves afterward,” Winer said. “You’d have to have a confession, and anyone who would confess would look psychotic.”

Parry observes: “Kerry’s decision not to fight has left millions of Americans wondering if their democratic birthright has been stolen–along with the last two presidential elections.”

I have asked Kerry to set the record straight for the book I am co-authoring with Steve Freeman, Was the 2004 Presidential Election Stolen? Exit Polls, Election Fraud and the Official Count, which will be published this spring by Seven Stories Press, but have yet to receive a response.