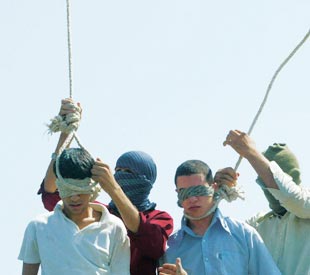 The July hanging of two gay teens in the city of Mashad sparked international outrage.

The Islamic Republic of Iran–under the new government of President Mahmoud Ahmadinejad–is engaged in a major anti-homosexual pogrom targeting gays and gay sex. This campaign includes Internet entrapment, blackmail to force arrested gays to inform on others, torture and executions of those found guilty of engaging in “homosexual acts.”

Homosexual acts have been considered a capital crime in Iran since the 1979 revolution that brought the Ayatollah Khomeini to power. Iranians found guilty of gay lovemaking are given a choice of four death styles: being hanged, stoned, halved by a sword or dropped from the highest perch. According to Article 152 of Iran’s penal law, if two men not related by blood are found naked under one cover without good reason, both will be punished at a judge’s discretion.

Iran’s crackdown on gays drew worldwide protests (except in the United States) after the hanging for “homosexual acts” of two teenagers–one 18, the other believed to be 16 or 17–on July 19 in the city of Mashad. Charges against the two teens included the alleged rape of another youth. But three independent gay sources inside Mashad told Afdhere Jama, editor of Huriyah (an Internet zine for gay Muslims), that the teens were well known in the city’s underground gay community as lovers who lived together, and that the rape charge was fabricated. The editors of an underground Persian-language zine in Iran (who requested anonymity out of fear) also confirm that their own Mashad sources said that the rape charge was trumped up–a view now generally accepted. In any case, the hangings were illegal under international law because Iran is a signatory to two treaties that forbid executing minors. Since then, there have been reports of at least a dozen more gay victims who have been executed.

“Under Islamic law, which has been adopted by Iran’s legal system, it takes four witnesses to prove an act of homosexuality, which is a capital crime. That’s why it’s much easier for the Islamic government to invent other criminal charges against gay people to get rid of them,” Jama told me. The Iranian gay zine’s editors said the same, urging Westerners to be “very careful” before accepting such criminal charges at face value, as they are “most likely false.”

Amir is a 22-year-old gay Iranian who was arrested by Iran’s religious morality police as part of a massive Internet entrapment campaign targeting gays. He escaped from Iran in August, and is now in Turkey seeking asylum in a gay-friendly country. Through a Persian translator, Amir gave me a terrifying, firsthand account of the anti-gay crackdown.

Amir’s first arrest for being gay came when police raided a private party. “The judge told me, ‘If we send you to a physician who vouches that your rectum has been penetrated in any way, you will be sentenced to death’,” says Amir. He was fined and released for lack of proof that a sexual act had taken place.

Later, an unrepentant Amir set up a meeting with a man he met through a Yahoo gay chat room. When his date turned out to be a member of the sex police, Amir was arrested and taken to Intelligence Ministry headquarters, “a very scary place,” he says. “There I denied that I was gay–but they showed me a printout from the chat room of my messages and my pictures.”

Then, says Amir, the torture began. “There was a metal chair in the middle of the room–they put a gas flame under the chair and made me sit on it as the metal seat got hotter and hotter. They threatened to send me to an army barracks where all the soldiers were going to rape me. The leader told one of the other officers to take [a soft drink] bottle and shove it up my ass, screaming, ‘This will teach you not to want any more cock!’ I was so afraid of sitting in that metal chair as it got hotter and hotter that I confessed. Then they brought out my file and told me that I was a ‘famous faggot’ in Shiraz. They beat me up so badly that I passed out and was thrown, unconscious, into a holding cell.

“When I came to, I saw there were several dozen other gay guys in the cell with me. One of them told me that after they had taken him in, they beat him and forced him to set up dates with people through chat rooms–and each one of those people had been arrested; those were the other people in that cell with me.”

Eventually tried, Amir was sentenced to 100 lashes. “I passed out before the 100 lashes were over. When I woke up, my arms and legs were so numb that I fell over when they picked me up from the platform on which I’d been lashed. They had told me that if I screamed, they would beat me even harder–so I was biting my arms so hard, to keep from screaming, that I left deep teeth wounds in my own arms.”

After this entrapment and public flogging, Amir’s life became unbearable. He was rousted regularly at his home by the basiji (a para-police made up of thugs recruited from the criminal classes and the lumpen unemployed) and by agents of the Office for Promotion of Virtue and Prohibition of Vice, which represses “moral deviance”–things like boys and girls walking around holding hands, women not wearing proper Islamic dress and prostitution. Says Amir, “In one of these arrests, Colonel Javanmardi told me that if they catch me again that I would be put to death, ‘just like the boys in Mashad.’ He said it just like that, very simply, very explicitly. He didn’t mince words. We all know that the boys who were hanged in Mashad were gay–the rape charges against them were trumped up, just like the charges of theft and kidnapping against them. When you get arrested, you are forced by beatings, torture and threats to confess to crimes you didn’t commit. It happens all the time, and has to friends of mine.”

Amir’s experience is typical–as is the lack of concern evidenced by U.S. LGBT oganizations. Both of the principal U.S. gay rights organizations–Human Rights Campaign and the National Gay and Lesbian Task Force–have failed to incorporate international solidarity with persecuted gays into their fundraising-driven agendas, and neither have mobilized public protests against Iran’s anti-gay pogrom. Their European counterparts, in contrast, organized multiple demonstrations at Iranian embassies across the Continent.

The Persian Gay and Lesbian Organization (PGLO) is the principal group for Iranian gays, claiming 29,000 on its e-mail list. The PGLO–which publishes a monthly Internet magazine in Persian, hosts radio netcasts into Iran, and has secretariats in Turkey and Norway–has appealed to Western gays to mobilize international protests against the inhumane tragedy that has befallen Iranian same-sexers. To find out how to help, visit www.pglo.org.