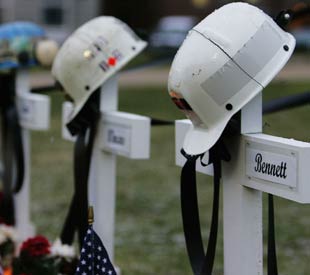 A make shift memorial is set up for the Sago miners.

For a couple of klieg-lit days in rainy West Virginia, we were reminded–once again–that the dark and hidden project of coaxing coal from the earth remains a deadly business. The January 2 nightmare of Tallmansville added 12 victims to history’s mountain of slain miners. Tallied as regrettable isolated incidents, these deaths were in many ways predictable fallout from corporate profit pressures and permissive government regulation.

A brief torrent of news coverage sketched a scofflaw mine with a long paper trail of unchecked safety violations. The Sago mine, first under its bankrupt former owner, Anker Coal Group, Inc., and now the International Coal Group (ICG), had an egregious record: 208 health and safety citations in 2005, nearly half of them “significant and substantial;” 17 citations for “aggravated conduct constituting more than ordinary negligence;” and triple the coal industry average for serious injuries resulting in lost work time.

Late last year, three orders had been issued to close portions of the mine. Despite numerous serious violations–including several roof collapses and accumulation of combustible materials–Sago’s operators were fined a grand total of only $24,155, with many fines as low as $60.

Widening the lens, the Sago tragedy showed that America’s industrial workers face deadly labor conditions due to anemic–and politically hogtied–government safety enforcement. Each year, more than 6,000 workers die and 4.5 million are injured on the job. A meager force of 1,100 Occupational Safety and Health Administration (OSHA) inspectors is charged with assuring safety for 115 million workers at more than 7 million work sites.

The prospect of dying underground weighs daily on miners as they tunnel into the earth, lured by wages that far exceed the impoverished alternatives in coal country. Despite mechanization and declining fatalities in recent decades, mining (including coal, iron and other forms) is the second most perilous sector of the economy, after agriculture–with a death rate seven times that of the general work force.

Coal miners have been further imperiled in recent years by an erosion of government safety protections, hastened by Bush administration appointments and cuts. A 2003 Government Accountability Office study on mine safety enforcement found that ventilation and roof inspections were inadequate; hazards identified by inspectors were not fixed promptly; and that “although about 44 percent of MSHA’s (Mine Safety and Health Administration) underground coal mine inspectors will be eligible to retire in the next five years, the agency has no plan for replacing them … the potential shortage of inspectors may limit MSHA’s ability to ensure the safety and health of underground coal miners.”

While the Bush administration, with Congress’ help, allowed its 2005 proposal to increase penalties for mine safety violations to die on the vine, its 2006 budget proposes a $4.9 million cut in real dollar terms to mine safety programs. (It also proposed to slash $6.7 million in real dollars from OSHA.) Since 2001, MSHA cut some 170 staffers, nearly 10 percent of the federal mine safety team.

Equally troubling, between 2000 and 2002, the number of government-approved mine disaster rescue teams declined by 10 percent. While federal law requires two rescue teams per mine, as of 2004 “there was only one team for every four underground coal mines in the country,” the Charleston (W.V.) Gazette reported. In December 2002, the Bush administration scuttled a MSHA working group convened during the Clinton years to improve mine rescue efforts. In the Sago disaster, it took more than 11 excruciating hours to assemble a backup team, likely hindering rescue efforts.

Mirroring its pro-corporate regulatory approach, the Bush administration has stacked the MSHA leadership with former industry executives. The current nominee to head MSHA, Richard Stickler, is an industry manager who “ran mines with injury rates twice the national average,” according to the Gazette. Other top MSHA officials include former executives for Amax Mining, Peabody Energy, Massey Energy and the American Mining Congress.

“With mining company officials at the helm of MSHA, the agency’s focus has clearly shifted away from protecting miners,” wrote Reps. George Miller (D-Calif.) and Major Owens (D-N.Y.) in a letter calling for congressional hearings. They cite a 2005 AFL-CIO finding that since Bush took office, MSHA has withdrawn 17 standards designed to improve miners’ health and safety–including regulations on air quality, chemical substances and respiratory rules.

Mining’s hazards, particularly at nonunion operations such as Sago, may be inflamed by intensifying production pressures. As oil and gas prices spiral, coal is in soaring demand. Coal prices have reached record highs, yet are still far below rates for other fossil fuels. Roughly half of America’s electricity is now coal-powered, a resurgence that bodes ill for the environment and global warming concerns.

“The structure of the power market is seeing a radical shift away from gas and towards coal,” a top power industry official told the Financial Times, which reported that orders for coal-powered electricity turbines are expected to rise dramatically in the next decade.

Only 11 percent of America’s 108,000 miners are unionized (compared with a dismal 8.6 percent of all private-sector workers), placing the fate of most miners in the hands of production-hungry coal corporations and a compromised government safety regime. Nonunion workers have no job security, no protection against company reprisals if they complain about hazards.

As the Gazette opined, “Until the nation gets serious about enforcing safety rules, miners and their families will continue to suffer to satisfy the nation’s energy appetite.” But the Sago nightmare, and ensuing congressional investigations, should shine a bright light not only on the forensics of underground coal mine safety, but on dismal government enforcement of safety for all workers.