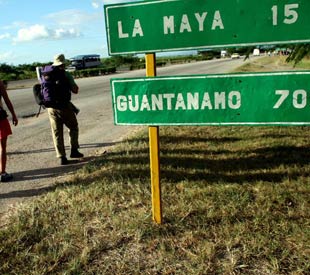 The march to Guantánamo

It was tough getting used to being a spectacle, but that is exactly what we were–a motley gaggle of gringos walking through Cuba in short pants and matching gray T-shirts that read “Witness Against Torture: A March to Visit the Prisoners at Guantánamo.” Wearing straw hats and sunglasses, we trailed clouds of sunscreen and bug spray.

Our journey did not start on a Cuban road. We had met and prepared for months to get to this point. Our conversations started as an exploration of ways to resist the “war on terrorism” and respond to the suffering of its victims–and ways to do that as Christians in the tradition of the Catholic Worker movement. Dorothy Day, one of its founders, is famous for having called privileged Catholics out of their church pews and into the streets, where they put the works of mercy–feeding the hungry, housing the homeless, visiting the prisoners–into action. Day also emphasized resisting what she called the “filthy rotten system” of war and injustice that keeps people poor and homeless.

When men imprisoned at Guantánamo Bay Naval Station went on a hunger strike this summer, we knew what to do: walk from Santiago–Cuba’s second largest city–to the U.S. base with the intention of visiting the prisoners. We figured we were only taking up an invitation President Bush made to European Union leaders last year in response to allegations of torture and human rights abuses there. “You’re welcome to go down yourselves … and tak[e] a look at the conditions,” Bush said.

By walking, we would deal transparently and openly with the Cuban government and we would draw strength from the rich history of nonviolent marches for social and political change–from Gandhi’s salt march to the Selma-Montgomery March to the Continental Peace March.

Of course, it was illegal for us to go to Cuba and Cubans themselves cannot march in protest without permission from their government. But it is no coincidence that the torture and abuse at the U.S. prison camp are hidden in a far corner of a foreign territory. The site was chosen with the cynical expectation that the prisoners would be beyond the reach of international law and investigation. Behind borders, and fences and oceans, their suffering would also be muted and remote. So, we went.

Our walk began in Santiago de Cuba on December 7 and over five days we walked about 70 miles, camping on the side of the road at night. Sometimes we walked in silence, meditating on the stories of prisoners in Guantánamo. I walked, thinking about Mohamed and Murat.

Mohamed el Gharani was 14 when he was arrested in an October 2001 raid on a religious school in Pakistan. Transferred to Guantánamo a few months later, he was subjected to routine and terrible abuse. According to his lawyer, Clive Stafford Smith, the Chad-born teenager had been singled out for mistreatment because he vocally objected to being called “nigger.” Mohamed is not the only juvenile imprisoned at Guantánamo Bay. Eight more teenagers are detained and five others have been released.

Murat Kurnaz was born to a Turkish family in Bremen, Germany. After September 11, 2001, he traveled to learn more about Islam in Pakistan, where he was arrested. He was eventually sent to Guantánamo where he remains in legal limbo. As the son of “guest-workers,” Kurnaz does not have German citizenship, even though he was born there. For a long time, Turkish officials maintained that Kurnaz was German and not their problem. Even after conceding their responsibility, Ankara has not pressured Washington to release Kurnaz. His mother begs “for a sign that my son is alive, that he is being treated justly, that he has not been tortured.”

After reflecting on the nightmares Mohammed and Murat have lived for more than four years now, I would resurface to marvel at the beauty of the countryside. As we walked, Cubans shared greetings, encouragement and most often incredulous exclamations like “a Guantánamo, caminando? A pied? Es bien lejos!” “Walking to Guantánamo? On foot? It is really far!”

On Sunday, December 11, after a long day’s walk on a busy road, we came to La Glorieta, a dusty little town near the end of our journey–the Cuban military checkpoint. The road forked and we were not sure which way to go. To the right, we could see the road blocked by a gate guarded by uniformed men. With Cuban television cameras rolling and the whole town out to watch us go by, we regrouped, forming two lines for our walk to the checkpoint.

I tried to be solemn as we approached the gate, but it seemed rude not to acknowledge all the people who had gathered. But as we got closer, I grew more serious. We planned to make a formal request to the Cuban military to be allowed to proceed through their checkpoint to the military territory it protected so we could hold our vigil closer to the American security perimeter.

It was an enormous and improbable request. The U.S. base at Guantánamo is a source of anger and fear for the Cuban people and their government. The United States annexed the 45-square-mile territory during the Spanish-American War and has held it ever since. Even if the Cuban military allowed us through their gate, there was still a mined no man’s land between us and the American naval base.

A half-mile farther down the road, we found a sturdy fence guarded by soldiers, men and women dressed in dark camouflage, their faces hidden below brimmed hats. We walked to the line of soldiers and read out loud an account of the hunger strike at Guantánamo from The Independent. We requested entry to address the crimes of our own government. The captain firmly refused to allow us through, but invited us to cross the white line separating civilian and military territory “as a gesture of solidarity with your cause.”

Inside the huge base, which straddles both sides of the Guantánamo bay, is Cuba’s only McDonald’s, a state-of-the-art recreation and sports facilities for American soldiers and their families, two airstrips, and a desalinization plant, because Cuba had cut off the base’s water supply. Somewhere in this far-flung slice of stripmall Americana are Camp Delta, Camp Echo, Camp Iguana and Camp V, where Murat, Mohammed and 500 other men are imprisoned.

We set up our camp along the Cuba fence, five miles from the prison, closer than Mohamed’s father or Murat’s mother have been to their sons in years. The dust and scrub brush next to the fence was our home for the next four days as we prayed and fasted. There, I thought of the scores of men on hunger strike. The only way to draw attention to their plight is to deepen their own suffering. Our fast was not a hunger strike, but it was long enough that cravings for food turned to actual hunger, and hunger turned into a peculiar light-headedness and clarity. It was long enough to realize that hunger is a violent act against biology, to reflect on the depth of powerlessness and despair–as well as the intensity of will and defiance–that informs the decision to fast to death. The authorities at Guantánamo reported that on Christmas the number of men refusing to eat had doubled to 84.

Our principal aim in going to Guantánamo–walking, vigiling and fasting–was to let the prisoners know that they were not alone. Despite the reflexive fear Americans have been inculcated to have toward the so-called “worst of the worst” held in Guantánamo, coverage of our witness in the U.S. press was positive and extensive. Our march and fast received widespread attention in the international press, including Arabic language outlets. All of that, combined with a network of lawyers representing prisoners who brought news of our proximity and solidarity to the men, means they knew we had tried, and are still trying.

While we await notice from the Treasury Department’s Office of Foreign Assets Control, the agency responsible for violations of the ban on travel to Cuba, we will not be idle. On March 1, those of us who marched to Guantánamo are organizing an action in Washington, D.C., to make the prison and its victims visible to those who are responsible for the torture and abuse. We continue to meet and plan, working to build a campaign to close Guantánamo, free those prisoners who are innocent of any crime and bring the United States back into accordance with international law. Join us.