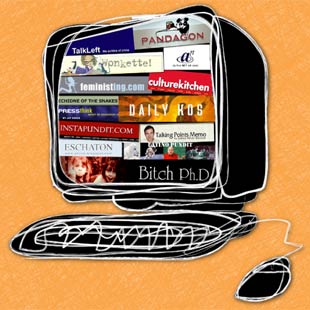 Don't miss an extended discussion of this article on our staff blog, The ITT List

We have no interest in being anti-establishment,” says Matt Stoller, a blogger at the popular Web site MyDD.com. “We’re going to be the establishment.”

That kind of flamboyant confidence has become the hallmark of blog evangelists who believe that blogs promise nothing less than a populist revolution in American politics. In 2006, at least some of that rhetoric is becoming reality. Blogs may not have replaced the Democratic Party establishment, but they are certainly becoming an integral part of it. In the wake of John Kerry’s defeat in the 2004 presidential elections, many within the Democratic leadership have embraced blog advocates’ plan for political success, which can be summed up in one word: netroots.

This all-encompassing term loosely describes an online grassroots constituency that can be targeted through Internet technologies, including e-mail, message boards, RSS feeds and, of course, blogs, which serve as organizing hubs. In turn, these blogs employ a range of features –discussion boards, Internet donations, live e-chat, social networking tools like MeetUp, online voting–that allow ordinary citizens to participate in politics, be it supporting a candidate or organizing around a policy issue. Compared to traditional media, blogs are faster, cheaper, and most importantly, interactive, enabling a level of voter involvement impossible with television or newspapers.

No wonder, then, that many in Washington are looking to blogs and bloggers to counter the overwhelming financial and ideological muscle of the right–especially in an election year. Just 18 months ago, the New York Times Magazine ran a cover story depicting progressive bloggers as a band of unkempt outsiders, thumbing their nose at party leadership. But now, it’s the party leaders themselves who are blogging. Not only has Senate Minority leader Harry Reid started his own blog–Give ‘em Hell Harry–and a media “war room” to “aggressively pioneer Internet outreach,” he’s also signed up to be the keynote speaker at the annual conference of the top political blog, Daily Kos.

Stoller predicts that as an organizing tool, “blogs are going to play the role that talk radio did in 1994, and that church networks did in 2002.”

An Internet-fueled victory at the polls would certainly be impressive–no candidate backed by the most popular progressive blogs has yet won an election. But electoral success may merely confirm the value of blogs as an effective organizing tool to conduct politics as usual, cementing the influence of a select group of bloggers who will likely be crowned by the media as the new kingmakers.

Winning an election does not, however, guarantee a radical change in the relations of power. Technology is only as revolutionary as the people who use it, and the progressive blogosphere has thus far remained the realm of the privileged –a weakness that may well prove fatal in the long run.

In 2006, the biggest question facing blogs and bloggers is: Will their ascendancy empower the American people–in the broadest sense of the word–or merely add to the clout of an elite online constituency?

The birth of a revolution

Alienation may not have been the mother of blogging technology, but it most certainly birthed the “political blogosphere.” The galvanizing cause for the rapid proliferation of political blogs and their mushrooming audience was a deep disillusionment across the political spectrum with traditional media–a disillusionment accentuated by a polarized political landscape.

In the recent book Blog! How the Newest Media Revolution Is Changing Politics, Business and Culture, Web guru Craig Shirky links the rise of political blogs to the sharpening Red/Blue State divide. Both 9/11 and the Iraq war reminded people that “politics was vitally important,” and marked the “moment people were looking for some kind of expression outside the bounds of network television,” or, for that matter, cable news or the nation’s leading newspapers.

Progressives were angry not just with the media but also with Democratic Party leaders for their unwillingness to challenge the Bush administration’s case for war. That much-touted liberal rage found its expression on blogs like Eschaton, Daily Kos and Talking Points Memo, and continues to fuel the phenomenal growth of the progressive blogosphere. Like the rise of right-wing talk radio, this growth is directly linked to an institutional failure of representation. Finding no mirror for their views in the media, a large segment of the American public turned to the Internet to speak for themselves–often with brutal, uncensored candor.

But for many, to rephrase director Jean Renoir, a blogs are still a state of mind. To their most ardent advocates, blogs are standard-bearers of a core set of democratic values: participation, egalitarianism and transparency. Books like Dan Gillmor’s We the Media, Howard Rheingold’s Smart Mobs, James Surowiecki’s The Wisdom of Crowds, and Joe Trippi’s The Revolution Will Not Be Televised have become the bibles of progressive politics. Taken together, they express the dream of Internet salvation: harnessing an inherently democratic, interactive and communal medium, with the potential to instantaneously tap into the collective intellectual, political and financial resourcesof tens of millions of fellow Americans to create a juggernaut for social change.

According to Moulitsas, “The word ‘blog’ still implies a certain level of citizen involvement, of giving power to someone who is not empowered”–especially to progressives who, according to a study released last year by the New Politics Institute, have overtaken conservatives as the heavyweights of the political blogosphere.

Political blogs have often been most effective as populist fact-checkers, challenging, refuting and correcting perceived errors in news coverage.

“Independent bloggers have challenged the mainstream media and held them accountable, whether it’s with Judy Miller or Bob Woodward,” says Huffington Post founder Arianna Huffington. The most significant effect of this “we can fact-check your ass” credo has not been merely to put journalists on notice, but to change the way public knowledge is produced on a daily basis. “It’s hard now for an important story to hit the front page of the New York Times and just die there,” says Huffington. A news article is now merely the beginning of a public conversation in the blogosphere, where experts, amateurs and posers alike dissect its merits and add to its information, often keeping it alive long after journalists have moved on.

Popular understanding of what blogs are and what they can do has been muddled by an inevitably hostile relationship between political bloggers and traditional media. Writing in the Dec. 26 issue of The New Republic, Franklin Foer took bloggers to task for nursing “an ideological disdain for ‘Mainstream Media’–or MSM, as it has derisively (and somewhat adolescently) come to be known.” But Foer, like so many traditional journalists who criticize blogs, failed to grasp the very nature of his intended target.

Blogs are literally vox populi–or at the least the voice of the people who post entries and comments, and, to a lesser extent, of their devoted readers. Telling bloggers that they’re wrong or to shut up is somewhat like telling respondents to an opinion survey to simply change their mind. When journalists reject bloggers as cranks or wingnuts, they also do the same to a large segment of the American public who seeblogs as an expression of their views. Such dismissals feed the very alienation that makes blogs and bloggers popular.

The irony is that bloggers are most powerful when they work in tandem with the very media establishment they despise. “Bloggers alone cannot create conventional wisdom, cannot make a story break, cannot directly reach the vast population that isn’t directly activist and involved in politics,” says Peter Daou, who coordinated the Kerry campaign’s blog outreach operations. Blogs instead exert an indirect form of power, amplifying and channeling the pressure of netroots opinion upwards to pressure politicians and journalists. “It’s really a rising up,” says Daou.

Can this online rebellion lead to real political change? The prognosis thus far is encouraging, but far from definitive.

Can the netroots grow the grassroots?

Blogs allow rank-and-file voters to pick the candidate to support in any given electoral race, influence his or her platform, and volunteer their time, money and expertise in more targeted and substantive ways. Democratic candidates in the midterm elections are already busy trying to position themselves as the next Howard Dean, vying for a digital stamp of approval that will bring with it free publicity, big money and, just maybe, a whole lot of voters.

When Rep. Sherrod Brown (D-Ohio) decided to take on Iraq veteran Paul Hackett in the Democratic primary for the Senate race in Ohio, he moved quickly to neutralize his opponent’s advantage as the unquestioned hero of the progressive bloggers. The ace up Brown’s sleeve: Jerome Armstrong, founder of the influential MyDD.com and veteran of Howard Dean’s online campaign. Brown’s next move was a blog entry on The Huffington Post titled, “Why I am a Progressive.”

But not everyone is convinced that blogs can be as influential in a midterm election, when there are a large number of electoral contests spread across the country. “Raising money at a nationwide level for a special election is one thing,” Pew scholar Michael Cornfield says, “but raising it and developing a core of activists and all the ready-to-respond messages when you have to run hundreds of races simultaneously–which is what will happen in 2006–is another thing.” Moreover, the ability of the Internet to erase geographical distances can become a structural weakness in elections where district lines and eligibility are key.

An effective netroots strategy in 2006 will also have to master the shortcomings of the Dean’s campaign, which stalled mainly because it failed to grow his support base beyond his online constituency–antiwar, white and high-income voters. In contrast, the Bush/Cheney operation used the Internet to coordinate on-the-ground events such as house parties, and rallies involving church congregations.