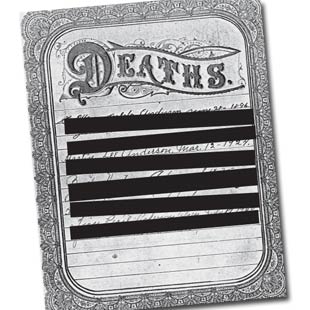 Sometimes it’s the small abuses scurrying below radar that reveal how profoundly the Bush administration has changed America in the name of national security. Buried within the Intelligence Reform and Terrorism Prevention Act of 2004 is a regulation that bars most public access to birth and death certificates for 70 to 100 years. In much of the country, these records have long been invaluable tools for activists, lawyers, and reporters to uncover patterns of illness and pollution that officials miss or ignore.

In These Times has obtained a draft of the proposed regulations now causing widespread concern among state officials. It reveals plans to create a vast database of vital records to be centralized in Washington, and details measures that states must implement–and pay millions for–before next year’s scheduled implementation.

The draft lays out how some 60,000 already strapped town and county offices must keep the birth and death records under lock and key and report all document requests to Washington. Individuals who show up in person will still be able to obtain their own birth certificates, and in some cases, the birth and death records of an immediate relative; and “legitimate” research institutions may be able to access files. But reporters and activists won’t be allowed to fish through records; many family members looking for genetic clues will be out of luck; and people wanting to trace adoptions will dead-end. If you are homeless and need your own birth certificate, forget it: no address, no service.

Consider the public health implications. A few years back, a doctor in a tiny Vermont town noticed that two patients who lived on the same hill had ALS or Lou Gehrig’s disease. Hearing rumors of more cases of the relatively rare and always fatal disease, the doctor notified the health department. Citing lack of resources, it declined to investigate. The doc then told a reporter, who searched the death certificates filed in the town office only to find that ALS had already killed five of the town’s 1,300 residents. It was statistically possible, but unlikely, that this 10-times higher-than-normal incidence was simply chance. Since no one knows what causes ALS, clusters like this one, once revealed, help epidemiologists assess risk factors, warn doctors to watch for symptoms, and alert neighbors and activists.

Activists in Colorado already know what it is like when states bar access to vital records. For years, they fought the Cotter Corporation, claiming that its uranium mining operations were killing residents and workers. Unwilling to rely on the health department, which they claimed had a “cozy” relationship with the polluters, the activists tried to access death records, only to be told that it was illegal in this closed-record state. An editorial in Colorado’s Longmont Daily Times-Call lamented, “If there’s a situation that makes the case for why death certificates should be available to the public, it is th[is] Superfund area.”

Some of state officials around the country are questioning whether the new regulations themselves illegally tread on states’ rights. But the feds have been coy. Richard McCoy, public health statistic chief in Vermont, one of the nation’s 14 open records states, says, “No state is mandated to meet the regs. However if they don’t, then residents of that state will not be able to access any federal services, including social security and passports. States have no choice.”

But while the public loses access to records, the federal government gains a gargantuan national database easily cross-referenced in the name of national security. The feds’ claim that increased security will deter identity theft and terrorism is facile. Wholesale corporate data gathering is the major nexis of identity theft. As for terrorism, all the 9/11 perpetrators had valid identification.

Meanwhile, the quiet clampdown on vital records is part of a growing consolidation of information at the federal level. “That information will dovetail with the Real ID Act of 2005,” says Marc Rotenberg of the Electronic Privacy Information Center. “Real ID cards are the other shoe that is scheduled to drop in three years.” That act, signed into law last May, establishes national standards for state-issued driver’s licenses and ID cards, and centralizes the information into a database.

Aside from public health and privacy concerns, closing vital records incurs a steep intangible cost: It undermines community in places where that healthy ethos still survives. In small town America, the local clerk’s office is a sociable place where government wears the face of your neighbor. Each year, Vermont’s 246 towns distribute their vital statistics to all residents. “It’s the first place everybody goes in the Town Report,” says state archivist Gregory Sanford. “Who was born, who died, who got married, who had a baby and wasn’t married.”

This may not be the most dramatic danger to democracy, but it is one of the Bush administration’s many quiet, incremental assaults on the health of America’s body politic. And it may end up listed on the death certificate for open society.