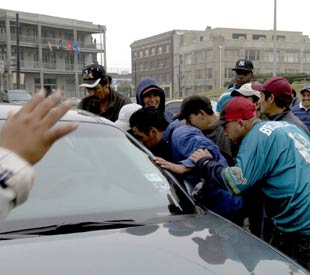 Workers crowd around a car in downtown New Orleans in hopes of being selected for a job.

While President Bush was making a post-Katrina “show” landing in New Orleans on January 12, declaring it a “heck of a place to bring your family,” Tomas Aguilar was trying to absorb the hell of a situation faced by thousands of immigrant workers.

Not far from where the president spoke, Aguilar had seen immigrants working 12-hour days and living in their cars and on bedrolls under bridges. On top of that, they were getting stiffed on pay.

“When I landed at the airport, I overheard two people talking who saw the hurricane as an opportunity. They were disaster entrepreneurs,” says Aguilar. “Then I get to the city, and it’s crazy.”

In December and January, Aguilar traveled throughout the Gulf Coast on an assignment from the Equal Justice Center in Austin, Texas, to make recommendations on worker needs and resources. He saw workers living in tents in a New Orleans city park, for which they were charged $300 a month. They cooked over an open fire and bathed from a bucket, unless they could afford the $5 fee for a shower in a nearby trailer. Others were sleeping three-high in bunk beds in a mold-encrusted hotel near Canal Street in downtown New Orleans.

“It’s a hierarchy and these workers are at the very bottom. And there is no one to help them,” says Aguilar.

At 5 a.m., Aguilar waited with workers who converge on designated street corners, waiting for contractors to drive them to the day’s assignments. He saw laborers tearing out mold-infested sheetrock, unprotected with the Tyvek suits that health groups recommend, and scaling roofs without safety equipment. And everyone, both workers and advocates, complain of the “Katrina cough,” a cold-like feeling that can’t be shaken. Aguilar has documented his visit on a Web site.

“Some contractors are paying people. But for every worker who is being treated well, there are 25 who are not. It’s like the Wild West,” he says.

“Wild West” is a term repeatedly used by worker advocates, but a more apt comparison might be the “Gulf Rush.” Companies are cashing in on the nation’s largest natural disaster while taking advantage of vulnerable work forces.

Of course, workforce abuse is not new. Katrina has only magnified it, with a little help from the Bush administration. Taxpayers for Common Sense and the Hurricane Law Blog–set up by a Louisiana law firm–are tracking companies getting the billions of dollars in no-bid contracts from the Department of Homeland Security (DHS) and the Federal Emergency Management Agency (FEMA), which is under its aegis.

KBR, a subsidiary of Halliburton, and Bechtel have billion dollar contracts; ECC from California has a $500 million contract; and the Shaw Group, a client of Bush’s former FEMA director Joe Allbaugh, got two $100 million contracts.

In September, eight representatives, led by Rep. Henry A. Waxman (D-Calif.), asked the independent Government Accountability Office to set up a special team of experienced auditors. Comptroller General David M. Walker declined, establishing instead a review of emergency systems for contracting. Allegations of contractor abuse–$85 billion has been spent on Katrina recovery so far–are being investigated by the Inspector General of the Department of Homeland Security, says DHS spokesperson Marta Metelko, although she could not say how many investigations are underway, of whom, for what abuses or when they will be complete.

But from the view in the bayou, nothing is happening. Corporations with government contracts hide behind layers of invisibility, hiring subcontractors who hire other subcontractors–a frayed rope ladder reaching down to the workers. While FEMA pays $24 a cubic yard on a contract for debris cleanup to the contract holder, workers get $4 a yard–if they get paid at all.

Bill Chandler, president of the Mississippi Immigrant Rights Alliance, describes immigrants abandoned without food at trailer parks. Some subcontractors, he says, have hired immigrant workers and, instead of paying them, called the Immigration Enforcement Unit, which arrests them.

“It’s a very loose and a very dishonest system,” he says.

Workers are being recruited from throughout the country. Most are immigrants from Mexico, Guatemala, Cuba, Dominican Republic and Brazil, according to Mary Bauer, director of the Immigrant Justice Project at the Southern Poverty Law Center in Alabama. She estimates that there are at least 100,000 now working in the Gulf region.

Bauer called together advocates to discuss immigrant worker issues in New Orleans, a city that Mayor Ray Nagin said is being “overrun” by Mexicans. Local lawyers are overwhelmed, says Luz Molina, a clinical law professor at Loyola University School of Law. For months, Molina was the sole volunteer attorney onsite at a pro bono call center handling floods of Katrina-related problems, from evictions to bulldozing.

With so little infrastructure and so few advocates, “anything goes,” according to Sally Bevill, a minister in the Mississippi Conference of the United Methodist Church working on disaster relief and recovery and Hispanic concerns.

“The truth of it is–and a lot of people don’t want to talk about the truth–many of the workers are undocumented,” says Bevill. “I spoke with three different groups of people who did the blue tarps for FEMA, and they didn’t get paid,” she says, of roofing workers. “The subcontractors pick up and move on.”

Chandler tried filing unpaid wage claims with the Gulfport Office of the U.S. Department of Labor, wage and hour division. But the office has only two employees for the entire region. Of nine filings, only one is being actively pursued, says Chandler. “There is no one here to enforce the law.”

In fact, the sole court action is in Maryland. CASA of Maryland, a Latino advocacy group, filed a lawsuit in late December on behalf of 35 local workers who were recruited for Katrina clean-up, many of whom were paid with checks that bounced. They are seeking $99,105 in wages and overtime from the subcontractor. Litigation would not be needed if safeguards were in place, says Steve Smitson, director of legal services for CASA, which aids immigrant workers. “Employers could be required to register. They could post wage bonds,” says Smitson.

The office of Sen. Mary Landrieu (D-La.) agrees that labor laws need to be enforced and that “there are still a lot of worker rights issues that need to be resolved,” according to Brian Richardson, her spokesperson. “But,” he says, “our first priority is to help Louisiana workers, to make sure that they get their fair share.”

Cynthia L. Cooper is a New York-based journalist. She is the author of several non-fiction books and has written more than 30 plays, including Women Heroes: Six Plays from the Women's Project.