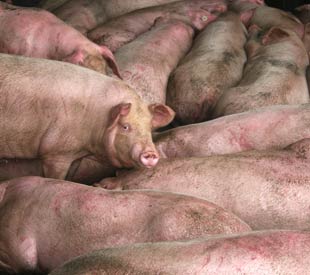 The sorry gaze of a factory farm commodity.

The constant shuffling of hooves raises a bacteria-laden dust cloud that’s carried by the prevailing winds into west Texas, where it joins the plumes of hundreds of other feedlots. At one end of the complex sits a giant lagoon that catches the operation’s chemicals, urine, antibiotics and other effluvia. In the narrow strip of land that separates the fencing from the road lie the carcasses of dead cows (a.k.a. “downers”), eyes bugged out, tongues dangling and bellies bloated in the summer heat.

Moving from bovine to porcine, factory hog farms generate an odor so intense it would knock a buzzard off a shit-wagon. In cramped warehouse structures, as many as 20,000 hogs are confined for their entire lives. After five months, the mature hogs are sent off to the slaughterhouse to have their throats slit and carcasses dipped in chemical vats to loosen their skins. According to Anita Poole, legal counsel for the Oklahoma-based Kerr Center, which has fought that state’s takeover by the hog industry, “The average Joe Blow who might stumble into a hog facility would never want to eat pork again.”

U.S. shoppers spend less on food as a percentage of their total annual expenditures than anyone else in the world. But this is because factory livestock farms–labeled “concentrated animal feeding operations” (CAFOs) by government agencies–don’t pay for the natural resources they have squandered, the farm labor they have maltreated, the declining health of residents who live near their operations, or the animals that have been exploited far beyond their biological capabilities.

Texas County is in Oklahoma’s Panhandle region. In 1990 it had 11,000 hogs. Today, according to the Kerr Center, the number has swollen to more than one million. For a region that was in economic decline, the offer by Seaboard Farms to locate an industrial-style hog operation held out the promise of reinvigorating the flagging economy, creating desperately needed jobs and re-filling the empty school desks.

But it came with a price. Seaboard demanded and received $60 million in local and state government assistance. This worked out to $27,552 per new job, a tolerable sum if the jobs paid $20 per hour, but the average hourly Seaboard wage was less than $8. In spite of the low wages, the deal might have been justified if the community received a commensurate growth in tax revenues. But by the time the county completed the financing deal with Seaboard, they had agreed to taxes of $9,700 per year until 2017 on a business site valued at $100 million. Even after Seaboard agreed to pay $175,000 annually to the district’s school board for the next 25 years, this still amounted to the county forgoing $120,000 per year.

Factory hog operations not only pay a meager return on a community’s investment, they also extract a high price from the surrounding region. With Seaboard’s influx of jobs came an increase in population, which in turn brought about a sharp rise in crime. From 1990 to 1997, crime in Texas County increased by 74 percent compared to a 12 percent decline in other rural Oklahoma counties. And factory farm workers in the West and Midwest are increasingly Mexican immigrants, only about half of whom are legally documented. They bring with them a host of needs that these rural communities are unequipped to handle.

But the worst problems are created by the ungodly amount of manure–an estimated 15 million pounds per day in Texas County. Because of water run-off from factory farms, both groundwater and surface water quality have declined. Even worse, the Ogallala Aquifer upon which the region depends for its water is being depleted at a rapid rate. The Oklahoma Water Resource Board reported that water levels in many Texas County wells have dropped 50 to 100 feet over the last 30 years, due in large part to the high water demand of factory hog operations and the irrigated farmland that supports them.

Across the nation, factory farms of all types are wreaking environmental havoc. A 1995 North Carolina manure spill killed 10 million fish and closed 364,000 acres of coastal shellfish beds. In 2004 the Iowa Department of Natural Resources recorded ammonia levels near a hog factory that were six times the recommended health standard. In California’s San Joaquin Valley, air pollution from factory dairy farms is a major reason that the region’s children have asthma rates three times the national average. In eastern New Mexico–the state’s factory dairy farm belt–recent research discovered antibiotic-resistant bacteria in dairy yards. For these reasons, the American Public Health Association has urged all levels of government to impose a moratorium on new CAFOs until a comprehensive environmental and health assessment can be conducted.

Herein lies the rub. The same government and private industry partnership that brought CAFOs to America’s marginalized rural communities is highly invested in not just keeping them there, but in seeing them metastasize. Through lax environmental regulations or the under-funding of agencies charged with regulating CAFOs, state governments have fostered CAFO-friendly policies at the public’s expense. To further protect their flank, factory farm interests have worked aggressively in state legislatures to restrict the ability of local government to keep CAFOs out of their communities. And just to be sure, New Mexico’s dairy industry considers it an act of “civic duty” for its farmer members to “serve” on local commissions and boards.

The halls of academe have likewise been compromised by CAFO industry “donations” to universities. Rather than use their scientific talents to assess the impact of CAFOs, research faculty are required to solve the industry’s problems (e.g., disposing of Himalayan mountains of manure). In 1998, New Mexico State University researcher Stephen Arnold found serious air and water quality problems near dairy operations in southern New Mexico. When the results were released through professional journals and conferences, the dairy industry complained so vehemently to the university that Arnold abandoned his research. And the Kerr Center’s Poole reports, “Oklahoma State University won’t do community impact research because of all the money they get from the pork industry.”

Barely 5 percent of U.S. farms now raise 54 percent of the country’s beef and dairy cattle. Corporations now produce 98 percent of all poultry. Small to mid-size family livestock farms are going the way of the dodo. While “local food movements” and a resurgent interest in grass-fed and free-range animal production are gaining traction and deserve our full support, they will never be enough to stem the “blood-dimmed tide” of the livestock industry.

Are the research reports, the scientific studies, and the occasional manure spill only isolated “factoids” in an otherwise benign landscape of inevitable agricultural modernization? Or is the increasing flow of data and the growing number of incident reports the proverbial canary in a coal mine? A recent World Watch Institute paper pronounced, “Factory Farms are breaking the cycle between small farmers, their animals and the environment, with collateral damage to human health and local communities.” And the Washington Post reported on North Carolina State University professor C.M. “Mike” Williams, who has spent five years researching how to treat manure from the state’s 10 million hogs. He concluded, “I do not feel that system [of factory hog farms] is long-term sustainable.”

Dr. Charles Benbrook, a former executive director of the Board of Agriculture for the National Academy of Science, shares Williams’ assessment. After years spent studying the dairy industry, Benbrook says he is “perplexed” by the growth of gargantuan dairy farms west of the Mississippi where subsidized water supplies in an otherwise dry landscape have made the expansion of dairy herds feasible–in the short term. In the long term, says Benbrook, further expansion of factory dairy farms “doesn’t make sense and is patently unsustainable because water will become too costly, and in not less than five years, but surely no more than 20, the dairy waste stream will overwhelm the absorptive capacity of the local environment.”

In other words, our food system may be looking at a doomsday denouement before the middle of this century. It is becoming increasingly certain that the water will run out, the land will no longer absorb the torrent of nutrient waste spread upon it, and the over-bred, antibiotic and hormone-injected animals will eventually succumb to their natural limitations. Poole puts it this way, “The factory system of food production will simply implode.” Until the citizens of the heartland rise up in sufficient numbers to hold their government and the corporations accountable, this is both the best and worst we can hope for.