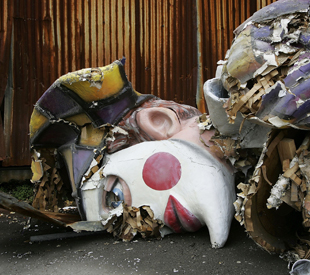 On Mardi Gras Day, the nation will be looking to New Orleans to see if we are wearing masks. We’ll be wearing them in New Orleans, but they’re being worn in Washington D.C. too. That’s because the face of our tragedy is being covered up with a big smile–we are having a party and pretending that the poor people can just go away.

The poor weren’t seen in the years before Katrina. Dark skinned women folded down white hotel sheets for revelers in the French Quarter. Men ported and washed dishes behind the screen doors of restaurants where beer-sodden tourists cheered. Children asked for a quarter to sing and dance as visitors from all over the world eyed them like a passing parade. The poor of New Orleans remained a feature of the local scenery as described in a 19th century novel.

The masks we’ll see this year have been worn in the past by outsiders who arrived with credit cards and attitudes of privilege and indifference. We too wore masks in our quest for the dollar. We smiled broadly and stepped lively–livelier perhaps than we should have. We made New Orleans a comfortable place for everybody but ourselves. For the sake of good business, we didn’t cry out that we were in dire straits.

At the last census, almost 40 percent of our households made under $20,000 a year, and in my neighborhood, 46 percent made under $15,000. When the police discovered that the seven square miles, which included the neighborhood where I grew up, led the city in homicides, we didn’t mobilize ourselves to sweep every block. Nor did we take to the streets screaming for more cops, courts and federal assistance when we threatened once again to become murder capital of the nation in 2005.

We let the bon temps roulle.

Now, with the sight of American citizens exiled on highways, the paint should have washed off all of our faces. But instead, the government’s plan for the poor masks a carnivaL economy without even a trickle down. Joseph Canizaro, chief author of the city’s redevelopment plan, who reportedly raised $200,000 for Bush’s 2004 reelection, told PBS’ “NewsHour,” “But I will tell you we will not have as many poor people. There’s no question. I’ve talked to a lot of them. They are better where they are. They want to stay where they are because they have a better life.”

In the past, we woke to the sounds of Mardi Gras Indians singing songs to wake the neighborhood. Homemade maskers walked to Canal Street, stopping at the wooden, shotgun houses of friends to eat breakfast. There was someone to visit, a place to sit, something to eat or drink and someone to dance with every few blocks.

This Mardi Gras, people will go to the parades, but mostly for their children’s sake. To keep up their spirits, they might even dress up and join the Blue Tarp costume contest. But they will remember that the last march that met on the corner of Clairborne and Orleans–where Black Mardi Gras is always held–was a month ago. Then, the second line clubs marched for housing.

Just as the nation watched and the first floats rolled out, Louisiana Gov. Kathleen Blanco announced a program that would give homeowners up to $150,000 to rebuild. But at its heart, New Orleans is home to people who loved where they lived–and that includes many people who rented. They lived in the now hollowed out streets of downtown and they created much of the magic of New Orleans.

For lack of homes, many of the friends who would usually costume on Mardi Gras are scattered to the winds. The charade is that they’re invited to come home, but can’t get a guarantee from the city or the feds that their communities will be safe, lit, have city services or funds to help residents with this overarching challenge.

On the contrary, according to Canizaro, with the redevelopment plan, 50 percent of the people in a neighborhood must be committed to coming back “before we have a neighborhood to design.”

To look at New Orleans on the eve of its most celebrated holiday is to see a city struggling with its own divided loyalties. No amount of tinsel floats can cure that crisis.

There is a way at Mardi Gras time to tell when the parade is coming. It is introduced with sirens and flashing lights. Then the drums sound.

Here’s the drumming we hear now: The rich and the developers are trying to appropriate land, and the blacks and the poor are being squeezed out. Each new plan reminds us that the president was still on vacation when we were drowning, and local leaders were confounded like lizards frozen on a branch.

Now, these same people are trying to run a parade through the tragedy in the hopes that Carnival can mesmerize us away from government responsibility, as if New Orleanians don’t know that the austerity of Lent begins at midnight.

Now, too many people who cook gumbo are gone, as are the people who wipe off the restaurant tables. Also gone are those who dance the alligator, belly down to the cement in the middle of the crowded street. Disappeared are the old men who sit on the steps and call “hey baby” to anyone under 90, and the old ladies who stand at the bus stop and give free advice. And too many arrogant people are saying out loud that New Orleans can do without poor people, as if they had no love of the place they were born.

In New Orleans, people are noticing that the poor just may not come back, given the obstacles put in their paths. They also see that a house of cards, king high, may just fall. The poor not returning home will cripple the food industry, hotel industry and the economy, but most especially the joie de vivre that has rested on them. The poor may not come home, but then, won’t New Orleans and the nation be sorry?