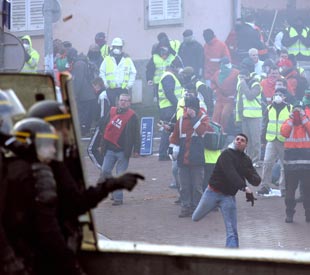 Dockers demonstrate in front of the E.U. parliament in January 2006.

Fear of the Polish Plumber

Neoliberalism’s discontents are fighting back in Europe.

The “Polish plumber”–a symbol of cheap labor–became a catchphrase in France’s “No” camp during its referendum on the E.U. constitution. His specter, wrench in hand, is rising again.

Since the start of the year, public opposition has foiled two attempts by the European Union parliament to pass sweeping “liberalization” laws in the shipping and service industries. Labor unions and anti-neoliberal organizations like the French group ATTAC protest that corporate elites are using the European Union as a front to roll back Europe’s enviable, but eroding, social welfare system.

Armed with slingshots, whistles and placards, thousands of workers from across Europe descended on Strasbourg, France–headquarters of the European parliament–on Jan. 16. Inside, European lawmakers were considering whether to “liberalize” dock services across Europe. Angry workers were met by police armed with tear gas and water cannons. Sixty-four police and an unspecified number of picketers were injured. At the same time, an estimated 50,000 dockworkers in Antwerp, Rotterdam, Le Havre and other ports shut down shipping operations with a 24-hour strike.”Not one crane is moving,” said German dock union spokesman Uwe Schroeder.

The E.U. measure aimed to end monopoly cargo handling operations at many of Europe’s ports–an attempt to lower costs and raise productivity and investment. Dockworkers feared that breaking up the monopolies would eliminate jobs, lower wages and raise safety risks. The protests and strike worked, as the European parliament voted 532 to 120 to reject the measure.

A month later in February, a bigger battled loomed with legislation to liberalize the E.U. service sector. The European Union’s argument: Goods can be freely traded within all 25 E.U. members, but not services. Named the Bolkestein Directive (in honor of Frits Bolkestein, the former E.U. Commissioner for the internal market and industry), it would have introduced the controversial “country of origin principle.”

In theory, what opponents called the “directive from hell” would allow any company to set up shop anywhere in Europe, but operate under the laws and regulations of its home country. In practice, it would have allowed firms from eastern European countries like Poland–where wages are a fraction of those in western Europe and labor laws are weak–to operate anywhere in the European Union under Polish laws.

On Feb. 16, a massive labor-led campaign against the Bolkestein Directive paid off when the European parliament passed, by 179 votes, a version of the directive minus the controversial “country of origin principle” provision and with labor safeguards intact.

The battle over the Bolkestein Directive illustrated an East-West fissure in the European Union. Workers in the west saw it as a back-door attempt to cut their wages and erode standards. Those in the former Communist bloc viewed it as a front-door entrance to better paying jobs. Eastern Europeans have become unwitting foot soldiers for neoliberalism. Last year, the governor of the Bank of England, Mervyn King, declared that immigration from eastern Europe had “reduced wage inflation” in Britain.

With Bulgaria and Romania set to join the European Union in 2008, downward pressure on wages is expected to grow. And talks on allowing Turkey to join only heighten such fears, albeit mixed with a large dose of Islamophobia.

More and more Europeans don’t like where the Eurocrats in Brussels are leading them.

Eurocrats know their market project is facing a credibility problem with the public. A January opinion poll showed Europeans both east and west generally cool to the European Union. But while they may be down, they are surely not out. The European Union’s so-called executive branch, Council of Ministers, has the power to nix the European parliament’s amendments to the Bolkenstein directive and, as the E.U. parliament Web site points out, is likely to ignore the parliament’s overwhelming rejection of the port directive. Such is democracy, E.U. style.