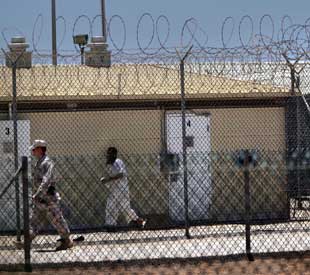 “He is in very poor health, which deteriorates day after day (details to be discussed with u in person). He has a family that is in desperate need of him.”

The fragment, taken from a page handwritten by another detainee, is the only record of Al-Ghizzawi to emerge from the Guantánamo Bay prison camp in four years. For Candace Gorman, a Chicago attorney who took his case pro bono, it provides the slightest bit of hope that he may someday emerge as well.

A Libyan, Al-Ghizzawi was invisible until he passed word through other detainees that he wanted a lawyer. Dozens of new detainees became known this way last year. Gorman took his case in November.

“The fact that I’ve been representing my client for four months and yet I can’t communicate with him in any way is just ludicrous,” Gorman says.

Gorman cannot see or talk with Al-Ghizzawi without filing a protective order with D.C.’s federal district court–an agreement that warns that she can be prosecuted for sharing classified information. The Justice Department is refusing to let those agreements be filed, because cases currently before the D.C. appeals court and the Supreme Court–Al Odah v. United States and Hamdan v. Rumsfeld–will affect what rights and legal venues detainees can access. The Supreme Court decided two years ago that detainees can challenge their detention, but until the latest cases are cleared everything else–including Gorman’s emergency petition to see Al-Ghizzawi–has been sidelined.

Perversely, Al-Ghizzawi may be lucky. Recent disclosures of detainee records show not all even have habeas petitions filed on their behalf yet, says Barbara Olshansky, assistant legal director of the Center for Constitutional Rights, which is coordinating their legal fight. These motions allow prisoners to challenge the legality of their detention.

For these prisoners, legal aid may come too late. The Detainee Treatment Act, passed late in 2005 as a rider to a military appropriations bill, strips detainees of their right to challenge their detention in court. The administration is arguing that it retroactively removes habeas rights for all detainees.

Even for those few lawyers who had already filed protective orders, gaining access to their clients is difficult. Some detainees have told lawyers they meet in the same rooms in which they are tortured. Meetings are videotaped, and lawyers’ notes are stripped from them before they exit the prison door. The notes are stamped “Classified,” and released weeks or months later with redactions.

Scraps of information reach Gorman this way, including the fact that Al-Ghizzawi has a brother who is a professor.

Bush administration officials called Guantánamo detainees “the worst of the worst.” But a Seton Hall law school team examined the redacted government filings against 517 detainees and found that slightly more than half have not been accused by the U.S. government of a single hostile act. The report also found that just 7 percent were apprehended by U.S. forces.

Instead, almost all detainees were turned over to U.S. custody by third parties, mostly Pakistani authorities and bounty-hunters enticed by pamphlets spread through the Middle East promising “enough money to take care of your family, your village, your tribe for the rest of your life.”

“They just paid the cash and got the person,” says John Anderson, an ex-Marine reservist and lawyer at Sutherland Asbill & Brennan whose firm represents five Yemeni detainees. “In many cases I think they were wondering what they had on their hands, and had no way of finding out.”

“What you will see [in Guantánamo] are men who are farmers, woodworkers,” Olshansky says. “They are the poorest people in the world. There’s not going to be a huge dossier on them.”

The appeals court is scheduled to hear its detainee case in March, and the Supreme Court decision is due in June. So Gorman–and Al-Ghizzawi–wait. She considers traveling to Libya to find his brother. Reluctantly she says, “That’s for another day.”