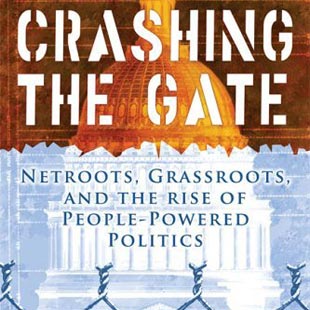 Barbarians at the Helm

First they ignore you,” opens Jerome Armstrong and Markos Moulitsas Zuniga’s new book Crashing the Gates, “then they laugh at you, then they fight you, then you win.”

If the choice of this epigram from Ghandi seems immodest, its confidence isn’t unwarranted. Moulitsas’ blog, DailyKos, gets 600,000 page views a day; Democratic congressmen regularly post on his blog and Armstrong’s, MyDD; and original netroots hero Howard Dean now runs the Democratic National Committee. The barbarians, then, are already well inside the gates. Hell, they’re practically picking out drapes for the palace.

Armstrong and Moulitsas present themselves as outsiders and iconoclasts, but CtG is best understood in the context of the rapidly-growing genre that might be called: “What’s the Matter With Democrats?” But where Tom Frank argued that Democrats have abandoned economic populism, and George Lakoff argued that they’ve done a poor job of framing their message, this book argues that the left’s failures are primarily organizational and infrastructural. Think of it this way: United Airlines didn’t declare bankruptcy because air travel declined, or because its ads suddenly got crappy. The problem was that it persisted in using an old business model and got out-hustled by scrappier, more innovative competitors.

And so it is, the authors argue, with the Democratic Party and its key allies in the upper echelons of the progressive movement. Largely due to the stewardship of a sclerotic, clueless old guard, the left has failed to adapt to the changing political terrain. Even after a succession of crushing defeats, “Democrats act as though they are still in power in D.C. and they just need to tweak their talking points and dispatch their lobbyists to Capitol Hill to get their legislation through.”

Take, for example, the issue groups. Beginning in the ’70s, single-issue groups like NARAL and the Sierra Club won a string of remarkable victories: from Roe v. Wade to the establishment of the EPA. But Armstrong and Moulitsas argue convincingly that the model of single-issue politics now produces diminishing returns. Hypersensitive about perceived slights to their own issue agendas, organizations often slavishly follow their own party line to the detriment of natural allies.

For two self-described political outsiders, Armstrong and Moulitsas’ analysis can focus on the surprisingly arcane: The reason the Democrats keep losing is … drum roll … they pay their media consultants by commission rather than a flat fee! But if much of the book seems mired in the picayune, that’s because in politics the devil really is in the details. After all, a few Ohio counties kept John Kerry from becoming president of the whole country. So it matters that, unlike their Republican counterparts, Democratic media consultants are paid based on how much advertising they buy, rather than how effective they are, because it means they generally blow as much money as possible. And it matters that while young interns at right-wing think tanks are feted and compensated, young interns at progressive organizations receive measly stipends and don’t get health insurance.

In fact, there’s something remarkably bracing about the authors’ approach. The Unified Theory of Progressive Revival may remain the Holy Grail, but while pursuing it, why not start attacking the small systemic dysfunctions that cripple the movement’s effectiveness?

Which isn’t to say the book is free of missteps. Armstrong and Moulitsas are proudly non-ideological, but at times their obsession with tactics over principles creates gaps in understanding. It’s true that NARAL and NOW, which come in for particularly intense criticism in the book, haven’t been successful lately, and they should focus more on building a Democratic majority than electing lone “pro-life” Republicans. But in their criticisms, Armstrong and Moulitsas seem unable to comprehend why choice activists might be miffed when the Democratic party backs candidates who believe in forced pregnancy. And when it comes to possible FEC regulation of the Internet, Moulitsas is willing to stand with right-wing bloggers against campaign finance reform groups, who are traditional progressive allies. Moulitsas is right on the merits, but if that’s not interest group politics, then I don’t know what is.

All in all, though, what’s most striking about CtG is that while Moulitsas and Armstrong occasionally ride their preferred hobby horses, you get the sense throughout that they didn’t come up with a thesis and search for the evidence to back it up. Instead, they traveled around, conducted lots of interviews and asked people on the ground what’s working and what isn’t. In case the irony is lost, these two bloggers went out and did some reporting. (And some reading: The book benefits from heavy citations of the fine work of the Washington Monthly’s Amy Sullivan and the New Republic’s Ryan Lizza, among others.)

If you spend time talking to progressive activists, you’ll find that many of CtG’s main arguments now constitute the emerging conventional wisdom. The new progressive membership groups, like MoveOn and Democracy for America, have eschewed single-issue structures to focus more generally on movement building; influential donors are trying to impose accountability on consultants; and Democratic politicians now vie to court the favor of the new activists.

You’d have to have to strain to hear anyone in the Democratic establishment laughing.