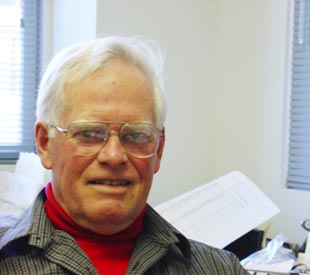 At the northern tip of Michigan’s lower peninsula lies the quaint town of Petoskey, population 6,080. In late March, a thick white shelf of ice still covers Lake Michigan, and a few miles north, over the Mackinac Bridge, the Upper Peninsula appears as a grey tangle of virgin wilderness. This isn’t the end of the world, residents say, but you can see it from here.

The town seems to have escaped much of the last four decades. Mom-and-pop stores and unassuming churches line its downtown, and there’s hardly a chain restaurant in sight. People wear flag pins on their lapels, even when they’re not running for office.

On the day I drive to Petoskey, the radio is buzzing with voices from the Great Immigration Debate: ranting talk show hosts, sermonizing senators and the chanting protests of thousands in Grand Rapids, a few hours south of Petoskey. Like hundreds of thousands of others, they are marching against House-passed legislation that would turn approximately 12 million undocumented immigrants into felons.

All the cacophony lacks is a mention of the one man who set much of this in motion 25 years ago, the man I had come to see: 72-year-old retired opthamologist John Tanton.

Tanton may not make headlines, but even a casual dusting of today’s anti-immigration movement reveals his fingerprints everywhere. Turn on Lou Dobbs and you’ll see experts from the Federation for American Immigration Reform (FAIR), the nation’s oldest and most influential immigration restriction group, which Tanton founded in 1979. Scan the newspapers and you’ll find Republican lawmakers reporting a tidal wave of calls from members of NumbersUSA, which Tanton cofounded. Watch the committee hearings on C-SPAN and you’ll hear anti-immigration talking points lifted straight from the Center for Immigration Studies, another Tanton creation. And on and on.

Thirty years ago, “if you wanted to call some group and say, ‘Tell me about immigration,’ there was no phone number,” recalls founding FAIR board member Otis Graham. Devin Burghart, who monitors the anti-immigration movement for the progressive Center for New Community, says that Tanton has done for immigration politics “what Pat Robertson did for the Christian Right. As a tactician, he’s done a brilliant job.”

Given that the movement he helped create now finds its base among conservative Republicans, you might expect John Tanton to be an unapologetic reactionary. You’d be wrong. He’s a self-described progressive, ex-Sierra Club member, Planned Parenthood supporter and harsh critic of neoclassical economists. So I wanted to know: How did a whip-smart, mild-mannered farm boy committed to conserving the natural world end up seeding and nurturing a movement that now dispatches gun-toting vigilantes to patrol the border?

In person, Tanton hardly seems like a firebrand. He speaks softly, and carries himself with the reserved politeness of the small town doctor he was for 35 years. When I get to Petoskey at noon on a Monday, I find him in a Presbyterian church, where for the last 20 years his Great Books club has convened. Tanton briefly interrupts the discussion of Joseph Conrad’s Under Western Eyes to introduce me, casually mentioning the magazine I write for, where I went to school and even what my major was. For a 72-year-old man, he sure knows his way around Google.

Tanton and his wife Mary Lou moved to Petoskey in 1964 after he finished medical school. The town’s small clinic had an opening, and, particularly important, some of the most pristine wilderness in America was just minutes away. The couple quickly threw themselves into a variety of conservation causes.

A fundamental problem the nascent environmental movement identified was, in Tanton’s words, that “the economic system is based on continual growth forever,” which “in a finite world” isn’t possible. The Tantons and others in the movement became convinced that something would have to give, and that it shouldn’t be the planet. To avoid catastrophe, society would have to reconstitute itself to favor conservation over growth. It is a small-c conservative philosophy: What the cheerleaders of modernity called “progress,” they called a plague.

In 1968, a Stanford biologist named Paul Ehrlich made these ideas mainstream with his book, The Population Bomb. With terrifying certainty, Ehrlich argued that the exponential growth in population and the incremental growth in food could only mean one thing: mass famine. “The battle to feed all of humanity is over,” the book begins. “In the 1970s … hundreds of millions of people are going to starve to death.”

It was an instant sensation, turning “overpopulation” into a hot topic and landing Ehrlich repeatedly on “The Tonight Show.” Tanton had been ahead of the curve. As early as the ’50s, he avidly read reports from the Population Reference Bureau, and by the time Ehrlich’s book was published, he and Mary Lou had already started work on the first Northern Michigan chapter of Planned Parenthood. “I believed in the multiplication tables,” says Tanton. “Since I was a physician and could do something about birth control, it struck me that this was where I could make my contribution to the conservation movement.”

Time hasn’t been kind to Ehrlich’s predictions: Due to a technological revolution in agriculture, there was no mass famine. World population growth has slowed considerably; the United Nations now predicts it could plateau by 2050. Many, if not most, professional demographers today are more worried about depopulation in the developed world.

But in many quarters, this “fixed pie” view persists, and the logic isn’t necessarily flawed. Resources, particularly oil, are finite and the notion that technology will always be able to bail us out is dubious. Perhaps Ehrlich’s predictions weren’t wrong, just premature.

Tanton, whose worldview was forged in this intellectual milieu, is haunted by the spectre of an apocalypse just over the horizon, and the thought that he is one of a select few who see it coming. Sitting at his desk during one of our interviews, he reaches into a drawer, withdraws an electric metronome and flicks it on. As the device pulses at 135 beats per minute, he explains that each beat is a new birth (at the 1969 rate), and each new birth requires resources: food, clothing, education. It’s a trick he used when he gave talks on population in the ’70s, and it’s effective. His voice barely rises over the percussive onslaught, and after just 30 seconds you want to yell: “Make it stop!”

You get the sense that Tanton hears that beat inside his head all the time.

In 1969, Tanton started and chaired the population committee of his local Sierra Club chapter, and when Ehrlich and like-minded environmentalists founded the advocacy group Zero Population Growth (ZPG), he became one of its most active members, rising to its presidency in 1975. By then, the birthrate for Americans had declined below the replacement rate, but the American population was projected to keep growing. Tanton settled on the culprit: immigration.

The number of immigrants was still small by today’s standards but had started to creep upwards, thanks in part to a 1965 immigration bill that instituted family reunification policies and did away with 40 years of quotas that heavily favored northern Europeans. Since immigrants had higher birthrates, reducing their numbers would allow the United States to achieve the zero population growth that had seemed a pipe dream only a few years earlier.

Tanton pushed for the Sierra Club to take a strong stand to reduce immigration, but the organization balked. He didn’t have much more success with his fellow travelers at ZPG. Tanton chalks it up to fear of tackling a taboo subject, but it seems just as likely that they couldn’t see why it mattered on which side of the Rio Grande someone was born. Today, ZPG, since renamed Population Connection, takes what its current president, John Seager, calls a “global approach,” supporting female literacy, access to birth control and family-planning services in the developing world. If Tanton’s concern is the health of the planet, why doesn’t he subscribe to this view? He explains that reducing immigration will force countries like Mexico to confront their own population growth rates. “Each country,” he says, “ought to try to match its population to its resource base.”

Ultimately, Tanton realized it would be impossible to graft a new agenda onto an existing organization and resolved to found his own group. With Otis Graham and a couple of sympathetic board members poached from ZPG and several hundred thousand dollars in startup money from a wealthy Ehrlich devotee, Tanton founded FAIR on Jan. 2, 1979, with a mission to end illegal immigration and reduce legal immigration.

It was at this point that Tanton initiated the hyper-productive schedule he’d maintain for the next 29 years, spending Tuesday through Friday seeing patients at the clinic and working evenings, weekends and Mondays on immigration. While his physician’s life gave him the “ability to restore sight,” it was repetitive, he says. His activism was “abstract, focused on the long term and people called you bad names, but it was extremely stimulating.”

Tanton talks with such evident passion about the minutiae of organizing–the importance of correctly naming organizations, rules for recruiting effective board members–that it’s tempting to see his work on immigration as something like Oppenheimer’s work on the bomb, driven as much by the sheer intellectual challenge as by its ultimate goal. In an early memo to FAIR staffers, he explained his enjoyment of fundraising: “t’s the ultimate chess game, in three dimensions, with the players all able to move themselves.”

The Tantons spent a year in D.C. working for FAIR between 1981 and 1982 (“crowded” is John’s assessment of the city) and their enthusiasm was contagious. One FAIR staffer wrote that the organization had “all the excitement and energy of a gold rush town.” When he returned to Petoskey, Tanton continued to grow the movement, helping to found the Center for Immigration Studies, NumbersUSA, Immigration Reform Law Institute and a journal, the Social Contract Press, which he has published out of his office for 16 years. He had some successes: FAIR membership grew to 50,000 by 1990 (today it claims 198,000 “members and supporters”), and it successfully lobbied for increased border security and harsher penalties in the two rounds of immigration legislation passed in 1986 and 1996.