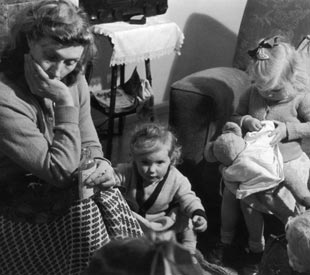 Housewife Annie Driver of Norfolk relaxes for a moment while looking after her children (1956).

To Hell With Caitlin Flanagan

Caitlin Flanagan, as it turns out, is no happy housewife quietly tending to husband and child, but a “domestic diva” who delegates the actual housework to the less fortunate, leaving her free to wax eloquent about the virtues of homemaking in lengthy essays in the New Yorker.

Yet the very order, harmony and meticulous attention to detail she lauds in the lost arts of housekeeping are conspicuously missing in her own seductive but intellectually sloppy prose. Her new book, To Hell With All That: Loving and Loathing Our Inner Housewife, reveals Flanagan as less an intellectual than a literary acrobat, who offers up contorted lines of reasoning and vertiginous leaps of logic, delivered with a fearless indifference to facts.

Every discussion of the woes of upper middle class life–sexless marriages, overscheduled children, maternal anxiety–ends with the same unlikely and wholly unsubstantiated conclusion: “What’s missing from so many affluent American households is the one thing you can’t buy: the presence of someone who cares deeply and principally about that home and the people who live in it.” (This doesn’t seem to have stopped Flanagan from “buying” the services of a personal organizer, nanny, gardener and housekeeper to do all that deep caring on her behalf.)

Flanagan may be easy to mock, but her ideas are not as easily dismissed. She is best understood as an eloquent raconteur of a pervasive cultural narrative that recasts modern middle class life as the proverbial fall from the Eden represented by ’50s America:

…a world that seems to me now a bygone age, as remote and unrecoverable as Camelot: a world of good meals turned out in orderly fashion; of fevers cooled without a single frantic call to the pediatrician; of clothes mended and repaired and pressed back into useful service rather than discarded to the rag heap … [of being] assured of safety, continuity, comfort of the highest order.

A paradise that was irretrievably lost when the feminist Eve foolishly bit the forbidden apple of economic independence.

In Flanagan’s writing, the ’50s housewife is confident, self-effacingly generous and loving, and, above all, happy, unlike the self-absorbed, neurotic bundle of insecurities that is today’s woman. Even the present-day “at-home” mother isn’t immune from the pernicious effects of feminism, which has burdened her with both a contempt for housework as “drudgery” and the need to “do things for herself.” (The words italicized to better convey the folly of such presumption.) So off she goes to the movies, the yoga studio, the book club to “feed herself intellectually and emotionally.” If middle class mothers are sleep-deprived, angry, exhausted, unhappy–as they undoubtedly seem in the many books and surveys–it is merely fitting punishment for their narcissism, a consequence of the foolish demand for self-fulfillment. Abandon that unreasonable desire, commands Flanagan, and ye shall find the secret to the happiness of your feminine forbears.

Attack her conception of the happy housewife as romantic and you merely confirm her view of feminism, which she accuses of “imposing a certain narrative–of boredom, of oppression, of despairing uselessness–on an entire generation of women.”

The problem of maternal misery, however, lies not in the ways that the preoccupations of women today are different from those of the post-war generation, but in the ways that they are entirely the same. The source of current-day fears and insecurities can, in fact, be traced to an ideology of motherhood that is nearly a century old.

Motherhood today, as Flanagan describes it, is experienced as “an exquisitely over-wrought enterprise, full of guilt-wracked, sleepless nights and over-worried-about children and the never-ending sense that I’m doing too little or too much or the wrong thing, missing the crucial moments, or somehow warping these perfect creatures.” This all-consuming angst stands in contrast to the “unworried ease” and serene sense of purpose exhibited by mothers of yore–benefits, Flanagan implies, that accrue from their “sense of having somehow been charged with the care of others,” which made them paragons of “competence, benevolence, calm authority.”

Yet a quick glance at the history books proves the contrary. The primary sources of present-day maternal–and more generally, parental–anxiety can be traced back to the ’20s, which witnessed the appearance of the first parenting manuals and the birth of Parents Magazine. In his book, Anxious Parents: The History of Childrearing in America, Peter Stearns charts the rise of child development experts determined to tutor parents on the scientifically correct way to raise a child. These early experts introduced two key ideas that would determine the future of parenting in America: one, children are fragile, helpless and malleable (as opposed to their hardy, self-sufficient, independent 19th-century predecessors); two, parents, especially mothers, are the single most important factor determining a child’s future. Denouncing the dangers of “traditional” childrearing practices allowed these experts to establish the incompetence of “problem” parents, who could not be trusted to rear children without outside intervention.

Cultural anxiety about children sparked by the rise of a mass urban industrial society ratcheted up the demands of parenting even as traditional sources of familial support–extended families, close-knit rural communities, live-in domestic help–were rapidly disappearing. By the time Flanagan’s beloved ’50s rolled around, the anxiety and confusion among mothers had reached new heights, thanks to World War II and the birth of the nuclear suburban family. Ann Hulbert notes in Raising America that a White House conference report, titled “Personality in the Making,” described middle-class women as “more or less dissatisfied and unsure of themselves, not certain that what they were doing is of real worth, fearful of failure in a job that is ill-defined.”

The various domestic manuals that Flanagan so admiringly quotes as evidence of ’50s family life were, in fact, attempts to soothe the nagging sense of ambivalence among American mothers. Far from the epitome of “unworried ease,” the American mother of the ’50s was, in the words of a New York Times Magazine article of the time, likely to be “torn between embattled forces of Discipline and Permissiveness, dazed by the potential perils of rejection, affection, early weaning, late toilet training and chronic thumb-sucking, traumatized by the fear of causing a trauma.” In other words, not all that different from her 21st century counterpart.

Apart from a brief lull during the ’70s, the requirements of the maternal role have merely escalated over the decades since. The large-scale entry of women into the workplace has been accompanied by a barrage of confusing, often contradictory models of parenting prompted by each new psychological or neurological “breakthrough.” All of these, oddly, require ever greater vigilance and attention. A McCall’s survey in 1984–a time when a majority of women were working–revealed that the ’80s “super mom” spent nearly three times as much time as her ’60s counterpart on cuddling, talking and playing with her children. By the ’90s, the expert consensus advocated an intensive regimen that required continual presence and vigilance, be it in the form of attachment parenting or intensive child development techniques.

As Perfect Madness author Judith Warner describes it, today’s mothers must “not just [be] loving nurturers but educators, entertainers, guardians of environmental purity, protectors of a stable and prosperous future” for their children. But Warner wrongly attributes our readiness to embrace this absurdly demanding version for motherhood on the “impotent control-freakishness” of the present generation. The 20th century–with its potent mix of scientific and therapeutic advances accompanied by intense social anxiety–has created an ideology of motherhood that tells women that they can never do enough, and everything they do can hurt their children.

Flanagan’s writing is simply the latest iteration of this ideological apparatus that keeps mothers feeling insecure and inadequate. She is no different from the bullying experts who hectored the ’50s housewife into beleaguered acquiescence.

If there is a formula for domestic happiness, the first step toward it would be to challenge an oppressive discourse of parenting that curtails any clear-eyed assessment of children’s needs. As Stearns notes, the United States is unlike Europe not merely in its lack of childcare options, but also its surfeit of parental anxiety: “And it is more than greater fatigue on the American side: it is constant guilt about whether the right choices are being made, whether the children are being adequately tended.”

Over the past hundred years, American culture has increasingly placed on the frail shoulders of parents–especially mothers–the responsibility of raising children, a weighty task that for millennia has been shared by the community at large. When dramatic social change creates fears about our children, our solution is to pressure women to do more, and more, and more. The so-called “Mommy Wars” deflect attention from the real problem at hand–a punitively demanding ideology of parenting that burdens all mothers–and reframes it as a debate about women who work. It makes it all that much easier to ignore social arrangements that are just plain unworkable.