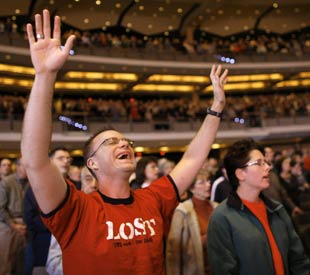 A parishioner sings a song of worship in the 7,000-seat Willow creek community church during a Sunday service in South Barrington, Ill.

Read another exclusive excerpt from Kingdom Coming at Salon.com

Whenever I talk about the growing power of the evangelical right with friends, they always ask the same question: What can we do? Usually I reply with a joke: Keep a bag packed and your passport current. I don’t really mean it, but my anxiety is genuine. It’s one thing to have a government that shows contempt for civil liberties; America has survived such men before. It’s quite another to have a mass movement–the largest and most powerful mass movement in the nation–rise up in opposition to the rights of its fellow citizens. The Constitution protects minorities, but that protection is not absolute; with a sufficiently sympathetic or apathetic majority, a tightly organized faction can get around it.

The mass movement I’ve described aims to supplant Enlightenment rationalism with what it calls the “Christian worldview.” The phrase is based on the conviction that true Christianity must govern every aspect of public and private life, and that all–government, science, history and culture–must be understood according to the dictates of scripture. There are biblically correct positions on every issue, from gay marriage to income tax rates, and only those with the right worldview can discern them. This is Christianity as a total ideology–I call it Christian nationalism. It’s an ideology adhered to by millions of Americans, some of whom are very powerful. It’s what drives a great many of the fights over religion, science, sex and pluralism now dividing communities all over the country.

I am not suggesting that religious tyranny is imminent in the United States. Our democracy is eroding and some of our rights are disappearing, but for most people, including those most opposed to the Christian nationalist agenda, life will most likely go on pretty much as normal for the foreseeable future. Thus for those who value secular society, apprehending the threat of Christian nationalism is tricky. It’s like being a lobster in a pot, with the water heating up so slowly that you don’t notice the moment at which it starts to kill you.

If current trends continue, we will see ever-increasing division and acrimony in our politics. That’s partly because, as Christian nationalism spreads, secularism is spreading as well, while moderate Christianity is in decline. According to the City University of New York Graduate Center’s comprehensive American religious identification survey, the percentage of Americans who identify as Christians has actually fallen in recent years, from 86 percent in 1990 to 77 percent in 2001. The survey found that the largest growth, in both absolute and percentage terms, was among those who don’t subscribe to any religion. Their numbers more than doubled, from 14.3 million in 1990,when they constituted 8 percent of the population, to 29.4 million in 2001,when they made up 14 percent. “The top three ‘gainers’ in America’s vast religious marketplace appear to be Evangelical Christians, those describing themselves as Non-Denominational Christians and those who profess no religion,” the survey found. (The percentage of other religious minorities remained small, totaling less than 4 percent of the population).

This is a recipe for polarization. As Christian nationalism becomes more militant, secularists and religious minorities will mobilize in opposition, ratcheting up the hostility. Thus we’re likely to see a shrinking middle ground, with both camps increasingly viewing each other across a chasm of mutual incomprehension and contempt.

In the coming years, we will probably see the curtailment of the civil rights that gay people, women and religious minorities have won in the last few decades. With two Bush appointees on the Supreme Court, abortion rights will be narrowed; if the president gets a third, it could mean the end of Roe v. Wade. Expect increasing drives to ban gay people from being adoptive or foster parents, as well as attempts to fire gay schoolteachers. Evangelical leaders are encouraging their flocks to be alert to signs of homosexuality in their kids, which will lead to a growing number of gay teenagers forced into “reparative therapy” designed to turn them straight. (Focus on the Family urges parents to consider seeking help for boys as young as five if they show a “tendency to cry easily, be less athletic, and dislike the roughhousing that other boys enjoy.”)

Christian nationalist symbolism and ideology will increasingly pervade public life. In addition to the war on evolution, there will be campaigns to teach Christian nationalist history in public schools. An elective course developed by the National Council on Bible Curriculum in Public Schools, a right-wing evangelical group, is already being offered by more than 300 school districts in 36 states. The influence of Christian nationalism in public schools, colleges, courts, social services and doctors’ offices will deform American life, rendering it ever more pinched, mean, and divided.

There’s still a long way, though, between this damaged version of democracy and real theocracy. Tremendous crises would have to shred what’s left of the American consensus before religious fascism becomes a possibility. That means that secularists and liberals shouldn’t get hysterical, but they also shouldn’t be complacent.

Christian nationalism is still constrained by the Constitution, the courts, and by a passionate democratic (and occasionally Democratic) opposition. It’s also limited by capitalism. Many corporations are happy to see their political allies harness the rage and passion of the Christian right’s foot soldiers, but the culture industry is averse to government censorship. Nor is homophobia good for business, since many companies need to both recruit qualified gay employees and market to gay customers. Biotech firms are not going to want to hire graduates without a thorough understanding of evolution, so economic pressure will militate against creationism’s invading a critical mass of the public schools.

It would take a national disaster, or several of them, for all these bulwarks to crumble and for Christian nationalists to truly “take the land,” as Michael Farris, president of the evangelical Patrick Henry College, put it. Historically, totalitarian movements have been able to seize state power only when existing authorities prove unable to deal with catastrophic challenges–economic meltdown, security failures, military defeat–and people lose their faith in the legitimacy of the system.

The breakdown in the system could also be subtler. Many experts have warned that America’s debt is unsustainable and that economic crisis could be on the horizon. If there is a hard landing–due to an oil shock, a burst housing bubble, a sharp decline in the value of the dollar, or some other crisis–interest rates would shoot up, leaving many people unable to pay their floating-rate mortgages and credit card bills. Repossessions and bankruptcies would follow. The resulting anger could fuel radical populist movements of either the left or the right–more likely the right, since it has a far stronger ideological infrastructure in place in most of America.

Military disaster may also exacerbate such disaffection. America’s war in Iraq seems nearly certain to come to an ignominious end. The real victims of failure there will be Iraqi, but many Americans will feel embittered, humiliated and sympathetic to the stab-in-the-back rhetoric peddled by the right to explain how Bush’s venture has gone so horribly wrong. It was the defeat in World War I, after all, that created the conditions for fascism to grow in Germany.

Perhaps America will be lucky, however, and muddle through its looming problems. In that case, Christian nationalism will continue to be a powerful and growing influence in American politics, although its expansion will happen more fitfully and gradually.

The country’s demographics are on the movement’s side. Megachurch culture is spreading. The exurbs where religious conservatism thrives are the fastest growing parts of America; in 2004, 97 of the country’s 100 fastest-growing counties voted Republican. The disconnection of the exurbs is a large part of what makes the spread of Christian nationalism’s fictitious reality possible, because there is very little to conflict with it.

A movement that constitutes its members’ entire social world has a grip that’s hard to break. In The Origins of Totalitarianism, Hannah Arendt put it this way: “Social atomization and extreme individualization preceded the mass movements which, much more easily and earlier than they did the sociable, non-individualistic members of the traditional parties, attracted the completely unorganized, the typical ‘nonjoiners’ who for individualistic reasons always had refused to recognize social links or obligations.”

Those who want to fight Christian nationalism will need a long-term and multifaceted strategy. I see it as having three parts–electoral reform to give urban areas fair representation in the federal government, grassroots organizing to help people fight Christian nationalism on the ground and a media campaign to raise public awareness about the movement’s real agenda.

My ideas are not about reconciliation or healing. It would be good if a leader stepped forward who could recognize the grievances of both sides, broker some sort of truce, and mend America’s ragged divides. The anxieties that underlay Christian nationalism’s appeal–fears about social breakdown, marital instability and cultural decline–are real. They should be acknowledged and, whenever possible, addressed. But as long as the movement aims at the destruction of secular society and the political enforcement of its theology, it has to be battled, not comforted and appeased.

Michelle Goldberg is a senior writer at Salon, where she has reported extensively on both sides of America's ever-seething culture war. She is the author of Kingdom Coming: The Rise of Christian Nationalism.

The Transition into a New Life: Church Land into Farmland