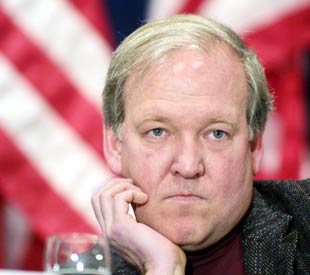 Mike McCurry, the former press secretary for President Bill Clinton is not amused at the 'net neuts.'

What makes the Internet revolutionary is that it is democratic, open to anyone with a computer and an Internet connection. That could soon change.

As In These Times went to press, the House was setting to vote on the “Communications Opportunity Promotion and Enhancement (COPE) Act of 2006,” a bill written by the telephone and cable TV corporations. Among other provisions, the act formally guts what is known as the First Amendment of the Internet–“network neutrality.” (The Senate will consider a similar bill in late May or early June.)

“Net neutrality ensures that the public can view the smallest blog just as easily as the largest corporate Web site and prevents companies like AT&T from rigging the playing field for only the highest-paying sites and services,” says Timothy Karr, the campaign director for Free Press, a media reform organization. Karr is coordinating SavetheInternet.com, a bipartisan coalition working to preserve network neutrality.

By not including network neutrality protections, the COPE Act upholds a 2005 ruling from the Federal Communications Commission that allows Internet service providers–telephone companies like AT&T and Verizon and cable companies like Comcast–to charge Web content creators a fee to make their sites readily accessible.

For example, take a filmmaker who wants to produce a documentary and distribute it to the public on his Web site. Under this new legislation, a service provider like AT&T would be able to charge the filmmaker for making his content available to their customers. Or, if AT&T did not approve of the documentary, it could refuse to let its customers access it all together–thereby allowing corporate censorship of a medium now characterized by the freewheeling exchange of ideas. In effect, the legislation allows the telecom industry to become the tollbooth operator on the information superhighway. The Internet will begin to look like cable TV, where viewers can only choose from available options.

SavetheInternet.com puts it this way: “The Internet has always been driven by innovation. Web sites and services succeeded or failed on their own merit. Without net neutrality, decisions now made collectively by millions of users will be made in corporate boardrooms.”

To harness the power of those millions is the goal of Save the Internet.com, whose key players in addition to Free Press include MoveOn, Punk Voter, Gun Owners of America and Consumers Union, along with bloggers like Glenn Reynolds at InstaPundit and Matt Stoller at MyDD. But as netizens are heeding a call to arms, the telecom industry has responded with a counterattack.

Karr observes, “How can you tell when corporations are running scared? When they wind up their coin-operated frontmen in Washington to unleash a tide of untruths upon the public.”

He is referring to the man leading the campaign against net neutrality, Mike “Industry Sock Puppet” McCurry, the former press spokesman for President Bill Clinton. McCurry is now a partner at Public Strategies, a PR firm whose motto is “managing campaigns for corporations around the clock, around the world.” In other words he is a 24-hour call boy for the telecom industry.

Using a classic PR technique, McCurry obfuscates the issue, invoking the First Amendment and dismissing net neutrality as “regulation.” Writing on the Huffington Post, he addressed his critics: “The First Amendment of the Internet is under assault! … The Internet has worked absent regulation, and now you want to introduce it for a solution to what?”

At Verizon, McCurry has gotten Peter B. Davidson, the senior vice president for federal government relations, on message. In a mass e-mail to the constituents of Congress members, Davidson told the voters “troubling ‘net neutrality’ provisions … have the effect of regulating the Internet. … Urge your representative, [insert name of representative], to support the swift passsage of a clean, unencumbered cable-choice bill that will give consumers real choice and bring lower prices to the cable market WITHOUT regulating the Internet.”

McCurry is a masterful propagandist. Consider his 561-word Huffington Post screed against the slimy “net neuts.” Of the 26 sentences in this “essay,” 11 of them were rhetorical questions. Such questions allow a person to hide behind the guise of critical inquiry and make unsubstantiated allegations. For example, I might ask, “Mike McCurry, when did you decide to become an industry whore?” (Well, sometimes unsubstantiated.)

Another of McCurry’s facile ploys is to provide his readers with false choices. Consider this sentence: “I’d rather have a robust Internet that can handle the volume of traffic that we will put on it in the near future rather than a public Internet where we all wait in line for the next porno-spammer to let his content go before we get to have arguments like this.” That’s our choice?

Responding to McCurry’s nonsense, ITT Senior Editor David Sirota observed: “Mike McCurry is in the middle of one of those tailspins of dishonesty and contradiction that is so wildly out of control you just have to sit back, grab some popcorn and watch with laugh.”

While Stoller, at MyDD, added: “Bashing Mike McCurry is not only fun, it’s important, as there must be a cost to his decision to sell us out.”

Such costs must also be borne by those in Congress who have decided to help gut net neutrality. The most prominent Democratic sponsor of the COPE Act is Rep. Bobby Rush, a former Black Panther who represents Chicago’s South Side.

How did this one-time militant morph into the Step ‘n’ Fetchit of the telecom industry? (Note the rhetorical question.) Perhaps the $1 million that AT&T (formerly SBC) gave to the Rebirth of Englewood Community Development Corporation has something to do with it. Rush and his wife founded and serve on the board of this company, which employs their son and which used AT&T money to build the Bobby L. Rush Center for Community Technology.

Sheila Krumholz, the acting director of the Center for Responsive Politics, the nonprofit group that tracks the role of money in politics, noted, “It is a clear conflict of interest for Rep. Rush to weigh in on this bill, much less take a leadership role championing the position of a company that paid $1 million to name a building after him.”

While the $1 million might have completed the bill of sale, the bidding for Rush’s services began years ago. Since 1998, telecom companies have contributed $204,000 to Rush’s relection campaigns, with AT&T (and its predecessors) leading the pack at $49,000.

In most mature democracies, this would be against the law, but until we enact meaningful campaign finance reform, such bribery is perfectly legal.

There are some honorable people in Congress. In the House, Rep. Ed Markey (D-Mass.) has now introduced the Network Neutrality Act of 2006 that, in his words, “is designed to save the Internet and thwart those who seek to fundamentally and detrimentally alter the Internet as we know it.” However, the GOP-controlled Rules Committee is unlikely to let it on to the floor.

Meanwhile, in the Senate, Olympia Snowe (R-Maine) and Byron Dorgan (D.-N.D.) are currently drafting a net neutrality bill. Whether that bill has a future–along with the net as we know it–depends on the volume of public protest.

As a start, sign a petition that demands Congress to pass enforceable net neutrality provisions. Visit www.SavetheInternet.com and make your voice heard.

With God on Their Side

The Christian right rallied behind Ohio Secretary of State Kenneth Blackwell on May 2, choosing him as the GOP’s candidate for governor. Blackwell rode to victory on a platform that emphasized opposition to gay marriage, abortion and taxes.

During the last presidential election, Blackwell, the state’s highest election official, served as Ohio chairman of the 2004 Bush-Cheney Campaign. He figures prominently in a book Steven Freeman and I have written, Was the 2004 Presidential Election Stolen? Exit Polls, Election Fraud and the Official Count, which is due out in June from Seven Stories.

Dubbed by the Chicago Tribune as the “anti-Obama”, Blackwell is a controversial figure. On Oct. 19, 2004, he made national news when, at a Christian right rally, he called on people of God to vote yes on Issue 1, Ohio’s anti–gay marriage constitutional amendment, saying, “I don’t know how many of you have a farming background, but I can tell you right now that notion even defies barnyard logic. … The barnyard knows better.”

For Blackwell, there are two types of laws, man’s and God’s. Defying an order from a federal judge that he not restrict Ohio voters’ use of provisional ballots, Blackwell invoked Gandhi, Martin Luther King and St. Paul, all of whom went to jail for their beliefs. In Blackwell’s case, he was a martyr for the idea that people can only cast provisional ballots in the precinct where they should be registered, rather than in any precinct in the county in which they live.

The right-wing political strategist Paul Weyrich has called Blackwell “someone who is God-centered and who prays to do God’s will rather than his own.”

“He believes God wanted him as Secretary of State during 2004. It is difficult to disagree with that proposition,” wrote Weyrich, referring to Bush’s election as president.

Warren and Sanders Say We Need a “Right To Repair” Tractors. Here’s Why That’s Important.