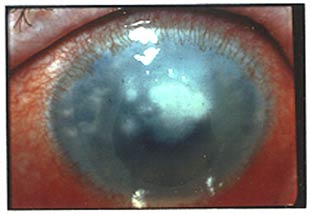 An infection caused by Fusarium fungus destroys a human cornea.

Why are members of Congress advocating the use of a dangerous crop-killer in Colombia?

On April 16, the New York Times ran a full-page ad from contact lens producer Bausch and Lomb, announcing the recall of its “ReNu with MoistureLoc” rewetting solution, and warning the 30 million American wearers of soft contact lenses about Fusarium keratitis. This infection, first detected in Asia, has rapidly spread across the United States. It is caused by a mold-like fungus that can penetrate the cornea of soft contact lens wearers, causing redness and pain that can lead to blindness–requiring a corneal replacement.

That same week, the House of Representatives passed a provision to a bill requiring that the very same fungus be sprayed in “a major drug-producing country,” such as Colombia. The bill’s sponsor was Rep. Mark Souder (R-Ind.) and its most vocal supporter was his colleague Dan Burton (R-Ind.), who has been promoting the fungus for almost a decade as key to winning the drug war.

The Colombian government has come out against it. And those entities of the U.S. government that have studied the use of Fusarium for more than 30 years don’t recommend it either: The Office of National Drug Control Policy, also known as the Drug Czar’s office, CIA, DEA, the State Department and the USDA have all concluded that the fungus is unsafe for humans and the environment.

“Fusarium species are capable of evolving rapidly. … Mutagenicity is by far the most disturbing factor in attempting to use a Fusarium species as a bioherbicide,” wrote David Struhs, then secretary of Florida’s Department of Environmental Protection, in a 1999 letter rejecting the use of the fungus against Florida’s outdoor marijuana crop. “It is difficult, if not impossible, to control the spread of Fusarium species.”

Mutation of the fungus allows it to attack other “hosts.” The eye-eating Fusarium seems to be a result of such a mutation. After all, the soft-contact lenses that it grows behind are a recent development–having only been commercially available since 1971.

The DEA stopped funding Fusarium research in the United States during the early ’90s after it learned that Fusarium infections can be deadly in “immunocompromised” people–not only AIDS patients and those with other illnesses, but also those who are severely malnourished. The University of the Andes in Bogotá has recently reported that 12 percent of Colombian children suffer from chronic malnutrition. Spraying this fungus on a vulnerable population could be perceived as using a biological weapon.

The CIA has been against the use of Fusarium to kill drug crops since at least 2000. At that time, one official told the Times, “I don’t support using a product on a bunch of Colombian peasants that you wouldn’t use against a bunch of rednecks growing marijuana in Kentucky.”

A top scientist from the USDA, which has studied the fungus the longest, said that his agency “cannot support” its use. And the State Department, whose Bureau of International Narcotics and Law Enforcement carries out drug crop eradication all over the world, does not support it, either.

In 2000, when Congress first passed “Plan Colombia,” the Colombian aid package that ordered the use of the fungus in Colombia, President Clinton waived the part of the bill that dealt with the fungus because he thought its use would be perceived as biological warfare. At the same time, the Andean Community of Nations, an organization comprising Bolivia, Colombia, Ecuador, Peru and Venezuela, banned it within their territories.

So, who does support the spraying of the eye-eating fungus over other countries? Only a few adamant drug war jihadists in the House, led by Burton, who are frustrated by the lack of progress in the drug war.

The fungus provision has already passed the House, but the Senate version of the bill contains no similar language. Responsibility for a final decision rests on the conference committee where the House and Senate bills will be reconciled–scheduled to happen before this summer.