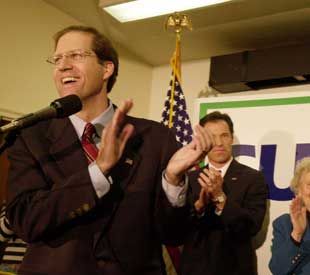 Dirty tricks: Did the White house help break the law to get sen. John Sununu (R-N.H.) elected in 2002?

How high did the Republicans’ New Hampshire phone scheme reach?

In October 2002, just weeks before Election Day, Chuck McGee, executive director of the New Hampshire Republican State Committee (NHRSC), hit on what seemed like a brilliant idea. His party faced a number of close races, the most important of which was the open seat Senate race between Rep. John Sununu (R) and Gov. Jeanne Shaheen (D). Every vote counted, as polls showed Sununu and Shaheen in a dead heat. Republicans had attacked with the standard array of ads and mailings, but McGee believed more could be done to ensure victory.

Drawing on his experience as a helicopter crew chief in the Marines, he hit on the elemental strategy of jamming the enemy’s communications. “n the military, it’s common sense that if you can’t communicate, you can’t organize,” McGee would later testify. The enemy here, of course, was the Democratic Party. McGee’s idea was to make it impossible for Democrats to organize on Election Day by flooding their phone banks with calls.

All McGee needed was the machinery to carry out his scheme. Being a military man, he went up the chain of command, to James Tobin, the regional director for both the Republican National Committee (RNC) and Republican National Senatorial Committee. McGee reported what he needed; Tobin, without a word of caution, gave him the number of Allen Raymond, who ran GOP Marketplace, a political consulting firm. McGee dialed up Raymond, and they struck a deal. For $15,600, Raymond would arrange for repeated hang-up calls throughout Election Day to six numbers: five New Hampshire Democratic Party offices and a Manchester, N.H., firefighters union that was offering voters rides to the polls. The NHRSC footed the bill. Raymond in turn contracted the job out to an Idaho firm called Mylo Enterprises for $2,500.

Although it might have been construed as a dirty trick, McGee believed the jamming was an acceptable battle tactic, like a borderline defamatory attack ad. This was not a covert operation. It had been authorized. He’d spoken to Tobin, and he spoke about the scheme with NHRSC Chairman John Dowd on the eve of the election. On Election Day morning, everything was going according to plan.

It went downhill from there. Early that morning, Dowd consulted the NHRSC’s legal counsel and was told that the jamming was illegal. He called McGee, who in turn called Raymond’s partner to call it off. But Mylo’s machines had been at it since 7:45 a.m. By the time they stopped, at 9:10 a.m., they’d jammed the six numbers for 85 minutes.

The ensuing Justice Department investigation has netted all four of the players at the heart of the conspiracy. McGee and Raymond pled guilty–McGee has already served his seven months in prison, and Raymond is currently serving his three-month sentence–and Tobin and Shaun Hansen, founder of Mylo Enterprises, were indicted. Tobin was convicted last December, mostly on the testimony of McGee and Raymond, and immediately mounted a vigorous appeal. Hansen will stand trial in October.

But did the conspiracy stop with those four? There are a number of reasons to think that it did not. First, all four have claimed that they did not know that the scheme was illegal. It might seem obvious that sabotaging get-out-the-vote operations would be illegal, but it appears the thought never occurred to these Republicans. Since those involved did not think that they were part of a criminal conspiracy, it seems likely that they spoke to others about it. McGee, for instance, called a number of other vendors before settling on GOP Marketplace to carry out the jamming. And this four-year-old crime was catapulted into the national spotlight in April when evidence emerged that Tobin had been in frequent contact with the White House.

An analysis by the Senate Majority Project, a Democratic advocacy group, of the phone records introduced at Tobin’s trial showed that he called one number at the White House’s Office of Political Affairs 110 times between Sept. 17 and Nov. 22, 2002, including 12 times on Election Day. According to Ken Mehlman, who ran the office in 2002, the number belonged to Alicia Davis, his deputy in charge of the Northeast. Mehlman has denied that Davis spoke to Tobin or anyone else about “the phone jamming incident.” Even so, as part of their ongoing civil suit against state Republicans for voter fraud, Democrats want to depose senior White House officials about what they knew about the jamming. As In These Times went to press, they were awaiting a ruling on their request.

Mehlman’s denial may be true–the calls are only circumstantial evidence. Perhaps more telling has been the RNC’s decision to foot Tobin’s $2.8 million legal bill. RNC officials told the Boston Globe that they backed Tobin because “the charges arose from his official actions” and because he’s “maintained his innocence.”

The connections to the national Republican establishment grew more significant in April when the AP reported that GOP Marketplace had started up in 2000 with help from some big-hitters. Haley Barbour, former RNC chairman and current governor of Mississippi, owned a stake in the firm, along with his investment partners Ed Rogers and Lanny Griffith (both well-connected conservative operatives). Carlyle Group Managing Director Ed Matthias also provided capital for the initial loan.

The only thing that could make the phone jamming scandal worse would be an appearance by Jack Abramoff. Sure enough, two of his tribal clients made inexplicable contributions to the NHRSC in October 2002. The Mississippi Choctaw cut a check on Oct. 10 for $10,000; according to FEC records, it was deposited on Oct. 28 along with a $5,000 check from the Agua Caliente. Together, the contributions total $15,000, approximate to the $15,600 the NHRSC paid for the jamming. There are no Indian tribes in New Hampshire. If Abramoff wasn’t somehow a party to McGee’s scheme, why did he direct money at New Hampshire? It is just one more open question emerging from McGee’s brilliant idea, which continues to shine an unwelcome light on the Republican Party almost four years later.

Paul Kiel is a reporter and blogger at TPMMuckraker.com.