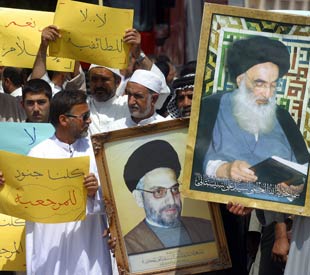 Shiite death squads in Iraq are carrying out a campaign that targets gay men for murder. This so-called “sexual cleansing” is happening under the nose of the U.S. military–but American authorities in the Green Zone have refused to do anything about it.

The highly organized campaign of beatings, kidnappings and murders of Iraqi gays follows a death-to-gays fatwa issued last October by Grand Ayatollah Ali al-Sistani, the 77-year-old Iranian who is supreme spiritual leader of all Shia Muslims in Iraq. The fatwa, available on Sistani’s official Web site, puts it this way, “The people involved [in homosexuality] should be killed in the worst, most severe way of killing.”

This reign of terror represents the importation into Iraq of the anti-gay killings being carried out in the Islamic Republic of Iran (see “Iran’s Anti-Gay Pogrom,” January). The Iraqi murders are the work of the Badr Corps, the military arm of the Supreme Council of the Islamic Revolution in Iraq (SCIRI). The largest political formation in Iraq’s Shia community, SCIRI was headquartered in exile in Tehran until Saddam Hussein’s fall.

The SCIRI’s Badr Corps wear the uniforms of Iraqi police, which is under the nominal control of the Interior Ministry. But the Interior Ministry has been heavily infiltrated by Iran. Moreover, the Badr Corps’ salaries are paid by Iran–as a counselor of Sistani’s, Ali Debbagh, who is a member of the Iraqi parliament’s Foreign Affairs Committee, confirmed in a Feb. 17 interview with Le Monde.

“We are receiving regular reports from our extensive network of contacts with underground gay activists and gay people in Iraq–intimidation, beatings, kidnappings and murders of gays have become an almost daily occurrence,” says Ali Hili, a 33-year-old gay Iraqi exile in London. Five months ago, Hili, along with some 30 other gay Iraqis who have fled to the United Kingdom, founded the Iraqi LGBT U.K. group to document this persecution and support the victims. The group is accumulating evidence that Iranian agents are advising SCIRI. He says there are reports that Iranian agents have been involved in interrogations, questioning those arrested in Persian through translators.

Also, as in Iran, “Badr militants are entrapping gay men via Internet chat rooms,” Hili says. “They arrange a date, and then beat and kill the victim. Males who are unmarried by the age of 30 or 35 are placed under surveillance on suspicion of being gay, as are effeminate men. They will be investigated and warned to get married. Badr will typically give them a month to change their ways. If they don’t, or if they fail to show evidence that they plan to get married, they will be arrested, disappear and eventually be found dead. The bodies are usually discovered with their hands bound behind their back, blindfolds over their eyes and bullet wounds to the back of the head.”

Tahseen, a 31-year-old photography lab technician and underground gay activist, told me by telephone from Baghdad that, “Just last week, four gay people we know of were found dead. I am afraid to leave my room and go out in the street because I will be killed.” He said that men who seem obviously gay “cannot walk in the street. My best friend was recently killed for being gay.”

Tahseen also described the Badr Corps’ Internet entrapment program, noting that “since Sistani’s fatwa, the violence and killings have gotten much, much worse.” Tahseen lives in a Baghdad apartment with his two brothers. “Right now, I have five gay men hiding in my room in fear of their lives,” he said, the anguish audible in his voice. One man given refuge by Tahseen is Bashar, a 34-year-old stage actor, who was forced into hiding after he and his family received death threats. He said that before he went underground, his house was raided several times by the Badr Corps. Fortunately, he was not at home.

“We desperately need protection!” Tahseen pleaded. “But, when we go to the Americans, they laugh at us and don’t do anything.”

According to Hili, “These assaults and murders have been reported by underground gay activists in Baghdad to the Green Zone, but the Americans don’t want to upset the religious authorities, and so they do nothing and treat gay Iraqis with contempt or as an object of humor.”

An April 10 report from the United Nations Office for the Coordination of Humanitarian Affairs confirmed that gay Iraqis have been targeted for kidnapping and murder because of their sexual orientation. A week later, the BBC also carried a report, interviewing several victims. But U.S. major media have so far turned a blind eye to this systematic murder of gays in Iraq–and to the refusal of the U.S. occupier to do anything to stop it.