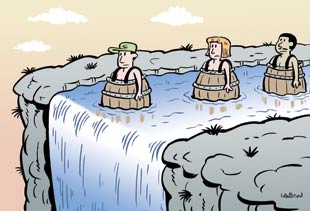 What happens when the credit card industry writes congressional legislation? According to the judges who have to enforce it, anarchy

In December, Alfonso Sosa, a house painter in Fredericksburg, Texas, fell behind on the payments for the mobile home he shared with his wife Melba. The mortgage holder moved to foreclose, and Sosa filed an emergency petition in federal court for bankruptcy protection. But the Sosa family quickly ran afoul of the country’s new bankruptcy law, which had gone into effect only six weeks before. One of the many new provisions requires all debtors to take a simple, one-hour credit counseling class before they file, but the Sosas had not known about the requirement.

Although Sosa had taken the class by the time they got back to court, U.S. Bankruptcy Judge Frank R. Monroe quickly dismissed their case, leaving the Sosa trailer open to foreclosure.

Monroe was furious, not with the Sosas, but with Congress for tying his hands. “Can any rational human being make a cogent argument that this makes any sense at all?” he wrote in his opinion. He even accused Congress of colluding with the nation’s credit industry “to make more money off the backs of consumers in this country.”

“It was very surprising that he came out swinging in that opinion,” says David Aaron DeSoto, a bankruptcy attorney in Corpus Christi, Texas, who occasionally practices in Monroe’s court. Soto says Monroe is known as a calm, careful judge who writes moderate opinions. “My frustrations and anxieties don’t matter much,” Soto says. “But Congress and the country should be paying attention to the judges.”

Monroe is not alone. Across the country, federal bankruptcy judges have begun to express frustration with the Bankruptcy and Abuse Prevention and Consumer Protection Act of 2005.

“No judge is comfortable doing something they know is unjust,” says U.S. Bankruptcy Judge Leif M. Clark, of San Antonio, Texas. However, judges all over the country have had to dismiss cases similar to the Sosas, he says. “I haven’t taken a survey,” he adds, but the critical reaction from bankruptcy judges crosses political boundaries. “I’ve gotten feedback from a wide variety and everyone says it’s badly done.”

“Unquestionably, this is the most poorly written piece of legislation that I or anyone else has ever seen,” says U.S. Bankruptcy Judge Keith M. Lundin, who has overseen cases in Tennessee since 1977. “No one has ever seen a piece of garbage like this,” he adds. “There’s going to be the most fantastic anarchy in bankruptcy courts for years.”

Many opponents of the new law hope that judicial frustration over how to interpret its hundreds of sections will help fuel a backlash, and allow a future Congress to knock out provisions, such as the credit counseling, that have made filing for bankruptcy more onerous.

“There is a need to do it,” says a House Democratic staff member, “but a strong inertia comes into play when you have a bill this contentious and complex.” After struggling over the bill for about eight years, with the financial services industry spending millions in lobbying fees, members of Congress are experiencing bankruptcy exhaustion, the staff member says. In addition, “there is nothing the courts are saying now that the Congress did not hear in committee.”

The law was the most comprehensive overhaul of the nation’s bankruptcy law since the late ’70s. “That [overhaul] was analyzed line by line on a bipartisan basis,” says Kenneth N. Klee, a law professor at the University of California-Los Angeles and former head of the National Bankruptcy Conference, an elite group of about 60 experts that has advised Congress for decades. “This time, and I say this as a Republican, [Congress] paid a lot more heed to the credit industry and other moneyed interests,” Klee says. “They ran it by the people who paid $100 million in lobbying fees to get this through.”

Klee says that only about five people, including Todd J. Zywicki, a law professor at George Mason University in Virginia, and several lobbyists, wrote the legislation. A group that small can’t coherently revamp something as intricate as the bankruptcy code, Klee says. Neither Zywicki, nor the office of Rep. F. James Sensenbrenner (R-Wis.), the bill’s chief sponsor in the House, returned calls seeking comment.

Hundreds of law professors and judges tried to weigh in, testifying before Congress and signing letters denouncing the proposed reforms. But they were no match for the coalition of credit card companies, auto lenders and home mortgage providers who claimed that many Americans who filed for bankruptcy–a record two million families in 2005–were abusing the system. The law easily passed both chambers last April.

Most experts say that since so few people are filing under the new law, evaluating the effect of the changes will be difficult for at least a year or two. According to Lundquist Consulting Inc., a giant rush of about 500,000 debtors filed for bankruptcy in the week before the new law became effective last October, but less than 30,000 filed in the next month.

However, some numbers have come to light, and the law’s opponents are having a tough time not saying, “We told you so.”

Throughout the legislative battle, creditors claimed that hundreds of thousands of debtors were filing for Chapter 7 bankruptcies every year–which offers them a fresh start by clearing most debts–even though they could afford a Chapter 13 bankruptcy, which requires debtors to work out a payment plan with their creditors. To help curtail the alleged abuse, families who earn more than their state’s median income are subject to a complicated “means test” designed to force many into Chapter 13 repayment plans.

But in February, the National Association of Consumer Bankruptcy Attorneys published a survey called “Bankruptcy Reform’s Impact: Where Are All The Deadbeats?” The association asked 10 leading credit-counseling agencies to provide data on the debtors they had begun seeing in October, and received a complete response from six. They found that less than five percent of their 60,000 debtors had sufficient funds to pay off their debt even under a Chapter 13. Nearly 80 percent had been driven to bankruptcy by medical illness, divorce, the loss of a job, or another force beyond their control.

Although the prospects for revisiting the bankruptcy code are not bright, some experts believe congressional inertia might be overcome if some of the biggest supporters of the 2005 reform conclude it’s not creating a financial windfall. For example, Jack Ayer, resident scholar at the nonpartisan American Bankruptcy Institute, says, “When everything settles down the credit card companies will be losing money on it.”

“It’s such a poorly thought out piece of legislation,” says Henry E. Hildebrand, a U.S. bankruptcy trustee in Nashville, Tennessee. He currently administers about 14,000 bankruptcies, deciding when and how much debtors need to pay their creditors. “They put too many loopholes in there,” he says. Under the old law, Hildebrand says he could force higher-income debtors filing Chapter 13 bankruptcy to give up a vacation home or car. Now, however, he says a debtor can claim that money used for car payments, even for a new Mercedes, can’t be redirected to pay off other debts. Hildebrand claims these new rules were inserted at the behest of auto and home lenders, who wanted to ensure they got paid before the credit card issuers. “The new law is good if you’ve got a lot of toys,” he adds.

For now, the Sosas and their three young children have hung onto their mobile home. They filed their bankruptcy case again, this time with the help of James Chapman, a bankruptcy attorney in Fredericksburg. The Sosas hope the house-painting business picks up and they can forge an agreement in court to hold onto their house and continue making payments. Chapman, however, says that the new law has “made everything more difficult and more expensive.”

Chapman and other bankruptcy lawyers say they now have to collect their clients’ tax returns, several months’ worth of pay stubs and other documents just to get them through the means test, and therefore, have to charge higher fees. The Sosas have had to pay him an extra $1,000 to handle the case, Chapman estimates–money that could have helped pay down the family’s debt.

The new law, he concludes, “has made life a lot more difficult for people in America who are having hard times.”