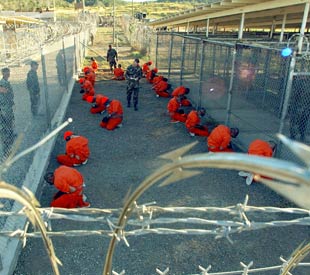 Why is the Pentagon keeping prisoners’ mail from their lawyers?

After the U.S. Senate voted last year to strip Guantánamo detainees of the right to habeas corpus, you’d think it would have dashed the hopes of the desperate prisoners that the world’s greatest deliberative body would prove their salvation. But Saifullah Paracha is apparently an eternal optimist. In March, after 18 months in Guantánamo, Paracha, 58, decided to write a letter to 98 U.S. senators describing his plight. The senators haven’t responded, though it’s hard to blame them. They don’t know the letters exist. The Department of Defense won’t release them for delivery.

“He lived in the United States,” says Paracha’s lawyer G. T. Hunt. “He’s a pro-American person. He believes in American justice. He believes that if he can get a hearing he’ll get out.”

In 1986, after studying and working in New York for 16 years, Paracha moved back to Pakistan, to Karachi where he and his wife raised four children and he managed several business ventures. In July 2003, Paracha traveled to Bangkok for what he thought was a meeting about a business opportunity. He never made it out of the airport. Masked men abducted him, taking him to Bagram Air Force Base in Afghanistan where he was interrogated and, according to Hunt, imprisoned in a cell with no toilet. His family spent a month with no idea of his whereabouts, until the International Committee of the Red Cross notified them he was in U.S. custody. After a year in Bagram, he was sent to Guantánamo in September 2004.

The United States believes that both Paracha and his son Uzair aided several Pakistani men alleged to be al Qaeda operatives. In November, Uzair was convicted in federal court of providing the operatives with “material support” and now faces up to 75 years in jail. Uzair maintains his innocence. He says he was an unwitting accomplice, merely helping his father’s business associates with their U.S. immigration papers. Saifullah says he does have a relationship with the alleged terrorists, but only knew the men as investors, not al Qaeda operatives. Unlike his son, he hasn’t been afforded an opportunity to make his case in court.

The rules guiding attorney/client correspondence at Guantánamo are frustratingly vague, lawyers for the detainees say, and the processing delays are maddening. Mail routinely arrives six months after it’s been sent, if it arrives at all. “For months I sent him letters and he sent me letters and they were all just impounded,” Hunt says. “Now, I think my letters get through but they take their sweet time about it.”

The ostensible reason for the backlog is security. “The attorney/client communications go to a secure facility, which happens to be here in Washington,” Hunt says. “And they can’t leave there until the government clears it and says it’s not sensitive and not classified.”

In order to read Paracha’s correspondence, Hunt must go to the secure location–“a grim featureless office, with blinds drawn 24 hours a day”–where he’s allowed to read Paracha’s letters to him before placing them back in a safe. Last month he saw the 98 letters, painstakingly copied in longhand, which Paracha had sent to him to review and distribute. But Hunt was told he couldn’t remove them from the safe. He can’t disclose what’s in the letters–“it’s a state secret,” he quips–but says “the person with the right authority could sit down, take a glance at them and then say, ‘OK they can go out.’ “

A Pentagon spokesperson wouldn’t comment directly on Paracha’s letters but said that over a six-month span in 2005, there were 10,000 pieces of mail sent to or from detainees. The detainees are “in close contact with family and friends if they choose to be,” the spokesperson said.

After Hunt sent an email to his fellow Guantánamo lawyers about the detained letters, several of them contacted their senators to inform them they had mail the Pentagon wasn’t letting them read.

This prompted an indignant letter from Sen. Patrick Leahy (D-Vt.), who wrote to Rumsfeld on June 5, asking if the Department of Defense has a “written or unwritten policy prohibiting all persons detained at Guantánamo Bay from writing to, or communicating in any manner with, Members of Congress?”

If so, “please explain what legal authority supports such a policy.”

On the bottom of the letter, Leahy scrawled in pen: “Is this really happening!”

Paracha must be asking himself the same question.