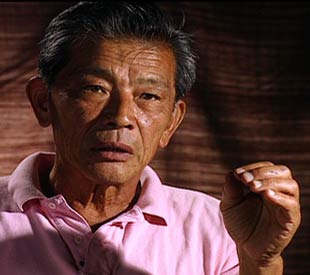 Mako, an actor who has appeared in over 90 feature films, talks about stereotypic portrayals he has had to struggle against.

At first glance, Jeff Adachi’s Slanted Screen is an earnest documentary that covers familiar ground. The shameful depiction of minorities–in this case, Asian-American men–in television and film is hardly news. What makes the movie special, however, is that it offers a rare view of Hollywood from the inside. Apart from the occasional talking head, the interviewees are actors, producers, directors and screenwriters.

Part of the movie’s interest lies in their horror stories, which are likely to make even the most jaded viewer cringe. Producer Terence Chang–whose big-budget credits include Mission Impossible II, Face-Off and Broken Arrow–describes being told to change the race of the white villain in the script for the Chow Yun Fat vehicle, The Replacement Killers, and make him a Chinese druglord instead. The logic: “If the hero is Asian then the bad guys have to be Asian as well.” The racism is open and unapologetic.

As gruesome as such anecdotes may be, Slanted Screen is most compelling when its subjects explore the conflict between who they are and what they do. It may be hard to watch a repulsive Long Duk Dong slobbering over the girl in Sixteen Candles, but it’s harder still to be the guy who plays him: Gedde Watanabe, a Japanese-American actor born and raised in Utah, who put on a fake accent to utter immortal lines, such as “No more yankie my wankie. The Donger need food.”

In the seven-minute short film The Screen Test–which was screened along with Slanted Screen in San Francisco–actress Judy Lee sums up every Asian actor’s moral dilemma: “Our paychecks come from stereotypes.” When there are practically no roles for Asians, a script that calls for an “opium den mistress” is a cause for celebration.

The art of survival lies in enduring what you must, and quietly changing what you can within Hollywood’s stifling parameters. What may look like just another stereotype from the outside may in fact be a serious attempt to challenge industry norms. A good example is what has become Hollywood’s favorite Asian character: the martial arts warrior. Bruce Lee may seem to be just another uni-dimensional macho hero, but his rise marked an epochal shift for Asian Americans, both as actors and as men. After decades of being demonized as sly yet effeminate “yellow peril” in the post-World War II era, Lee represented a positive, vigorous version of masculinity. And it’s this consolation that actors like Cary-Hiroyuki Tagawa cling to when they play similar roles in movies like Mortal Kombat, even when they’re negative. “If the choice is between playing wimpy business men and the bad guy,” Tagawa tells Adachi, “I’d rather play the bad guy. … I want kids to know that Asian men have balls.”

When Hollywood allows Asian leading men to be macho, it rarely gives them the privilege of being “American.” “Asian Americans tend to be looked at as perpetual aliens,” says author and poet David Mura. “In other words, an Asian-American male can’t be seen as representative of all Americans in the way Tom Cruise or Tom Hanks or even Denzel Washington can.”

According to University of Delaware English professor Peter X. Feng, the benefit of safely foreign heroes such as Jet Li or Chow Yun Fat is that “they come to these shores to solve a problem and then they leave. So there is never any question of integrating them into the American body politic.” In this sense, Mura argues, Asian-American men are worse off than women, who “are more easily assimilated by the white psyche in part because they are seen as sexually available to white men.” Hence Lucy Liu can be one of Charlie’s Angels, but no one would cast, say, Jason Scott Lee in a remake of Starsky and Hutch–though Hollywood execs were only too happy to cast him as an Indian in The Jungle Book.

While there have been exceptions to this depressing norm–Dustin Nguyen as Officer Harry Ioki in “21 Jump Street” or more recently, Harold and Kumar Go to White Castle–the predicament facing Asian male actors today is grim compared to Hollywood’s silent era, when Sessue Hayakawa rivaled Douglas Fairbanks, Charlie Chaplin and John Barrymore in popularity as a leading man. But despite his Rudolf Valentino-esque persona, even Hayakawa almost never got the girl–not unless she was played by his own Japanese wife, Aoki. His present-day counterparts are no better off. Chow Yun Fat never gets to kiss Mira Sorvino in Replacement Killers, while the creators of Romeo Must Die edited out the sole kiss between Aaliyah and Jet Li. “To say it doesn’t affect us is bullshit,” declares Tagawa, the anguish bubbling to the surface as he exclaims, “We’re not eunuchs!”

The stark contrast between the sexual images of Asian men and women on-screen follows the dictates of age-old colonialist logic, where the sexual appropriation of women is accompanied by the emasculation of the men. That the documentary never includes a discussion of women, or their perspective, is a glaring omission. The very action hero roles that seem to affirm Asian masculinity can be deeply problematic from a feminist perspective. Is a Schwarzenegger-like machismo really the kind of Asian male identity that we want to promote?

The sexual politics are even more complicated. Take, for example, the comments of Gene Cajayon, who directed one of the first Filipino-American movies, The Debut (2000). Cajayon says it was important for him to make his lead character “someone who is attractive to white girls” so as to establish his credentials as a bona fide “cool kid.” But how subversive is this character if his masculinity requires a white seal of sexual approval and treats white women as mere markers of his prowess?

A more compassionate interpretation of this desire is to see it instead as a hunger to be seen as sexual, period. That it entails white affirmation is merely a sad acknowledgement of the requirements of the broader culture we live in. “It seems to me unfair to question the desire of Asian-American men to feel sexually attractive,” says Mura. “If an African-American man were to say, for instance, that he wanted to be appreciated for his intelligence and not just stereotyped for sexual or athletic prowess, would we say he was succumbing to a trap which defined real male worth by intelligence?”

Mura argues that Asian men “desire a complete picture of ourselves and to be valued as complete individuals. We desire respect in those areas where we feel we are disrespected. We don’t get to pick and choose where those areas are.” But we are more likely to see a more “complete” picture of Asian men if we portray them as they are rather than as ethnic versions of Hollywood gender-laden fantasies of manhood that haven’t served white men well. In fact, those kind of movies will be just as valuable for the rest of us, male or female, Asian or otherwise.