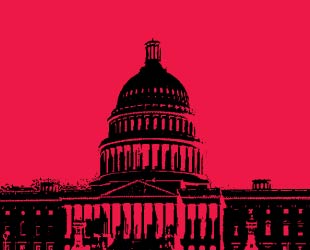 The irony of the ongoing federal corruption investigations striking fear into the hearts of members of Congress is that nearly everyone who has gone to jail, been indicted or served with a subpoena could have gotten away with it. Under the current campaign finance system, there is more than enough perfectly legal graft to fund all the five-star restaurant dinners and jet trips to luxury golf resorts that a legislator could desire, and still have enough left over to finance a winning reelection campaign for a job that offers a $165,000 salary, healthcare plan and generous pension.

These perks can be funded by perfectly legal campaign contributions as long as they are written off as “campaign expenses.” And every day members of Congress collect checks from those eager to gain influence. It is a testament to the hubris and greed of those caught up in this year’s scandals that they cross the line between such “legal bribery” and the straight-up bribery of promising legislative favors for bundles of cash.

While federal campaign finance laws severely restrict what you can give directly to a candidate, virtually nothing restricts individuals from going out and collecting massive amounts of other people’s money for delivery to a single candidate.

The first people to really figure this out were those on the team charged with raising a presidential campaign war chest for then-Governor George W. Bush big enough to scare off any challengers in the primary election. In a visionary development, the campaign created a sophisticated system by which they recruited surrogate fundraisers and then tracked their progress. Those who raised at least $100,000 for the campaign were awarded the title of “Pioneer.” The system was so successful that in the 2004 campaign a special “Ranger” designation was created for those uber-fundraisers who brought in more than $200,000.

Unfortunately, the cachet that comes with being publicly recognized as a friend and financier of the potential president-to-be was too marketable for those influence peddlers for whom access is the ultimate tradable commodity. These men–they are overwhelmingly men–were not the wealthy true believers like real estate mogul and Ranger Alex G. Spanos, or even industrialists seeking a lighter regulatory hand like the late Enron CEO and Pioneer Kenneth Lay. No, this breed saw fundraising as an explicit part of their business model. They either sold this access to others or used it for themselves, but it was always a good investment, generating returns rarely seen in the stock market.

Not surprisingly, many from the ranks of Bush’s Pioneers and Rangers would end up on the wrong side of the law in the current bribery scandals. A year and a half after the president’s second inauguration, at least nine of his fundraisers find themselves under investigation, indictment or convicted of state or federal crimes; five of them for offenses specifically related to their political activity or exploiting the access that came with it. Super-lobbyist and convicted felon Jack Abramoff is Exhibit A. [See accompanying sidebars.]

The lure of the golden rolodex

On Jan. 25, three weeks after Abramoff pleaded guilty to conspiracy to bribe members of Congress and less than two months after Rep. Randy “Duke” Cunningham (R-Calif.) pleaded guilty to taking bribes from a defense contractor and lobbyist, a Senate committee meeting on ethics reform elicited a rare moment of brutal candor. The meeting, held at the height of the public uproar over the Washington scandals, showed that the surrogate fundraising system has spread to Congress.

In the middle of a discussion about several small-bore proposals to ban members of Congress from accepting gifts of meals and trips from lobbyists, Sen. Dick Durbin (D-Ill.), the minority whip, pooh-poohed such considerations as “carping on trifles.”

“Why is it that we warm up to all these lobbyists?” Durbin asked. “It isn’t for a meal. … We know when it comes time to finance our campaigns, we’re going to be knocking on those same doors.”

Sen. George Voinovich (R-Ohio) agreed. “It’s out of control,” he said. “We all hate it. And it’s about time we collectively think about how we can get off the treadmill.”

The treadmill Voinovich was referring to is the relentless fundraising needed to run a modern political campaign. According to the Center for Responsive Politics, in 2004 the average winning House campaign cost $1 million, a winning Senate campaign $7.2 million and President George W. Bush’s successful reelection a whopping $345 million. In the 2004 election, 1,403 congressional candidates raised more than $1.2 billion to pay for their campaigns.

To acquire such massive amounts, candidates turn to the best fundraisers in the country: Washington lobbyists. A recent study by the reform group Public Citizen found that lobbyists and their political action committees pumped $33.9 million into the 2004 congressional campaigns, a 90 percent increase from 2000.

“But,” says Public Citizen’s Legislative Representative Craig Holman, “these numbers are just the tip of the iceberg. The only money we could actually pin down were the checks personally signed by lobbyists. The law, unfortunately, doesn’t require candidates to disclose whether those same lobbyists raised contributions from others, and that’s where the real money is.”

Unlike the Bush campaigns, most congressional candidates take advantage of this loophole to keep their fundraisers secret. Officially, from 1998 through 2005, Abramoff only contributed about $180,000 to congressional candidates. However, when contributions from his clients and associates are factored in, the total rises to roughly 14 times that, $2.6 million.

The phenomenon is a direct result of how federal campaign laws are set up. While the relatively low federal limit of $2,100 per person, per campaign, per election constrains what lobbyists can give personally, it also increases candidates’ dependence on surrogates who have “golden Rolodexes” filled with the names of people willing and able to cut checks to politicians at their direction, a process called “bundling.”

Ironically, the passage of the landmark McCain-Feingold campaign finance reforms of 2002 helped to foster this reliance on bundling. The reforms’ chief achievement was to close a loophole that allowed large donors to effectively launder contributions of hundreds of thousands of dollars by passing them through the political parties. When the reforms were passed, candidates suddenly needed thousands of $2,000-level donors instead of smaller bands of $100,000 donors. The easiest way to accomplish that was to enlist bundlers.

Operating in the shadows

It is impossible to know for sure who the congressional bundlers are or how much they raise because most, if not all, members of Congress guard such information very tightly. However, the rosters of Pioneers and Rangers released by the Bush campaigns–as well as the steadily leaked stream of invitations to after-hours fundraisers held at Washington lobbying firm offices–show that this class of operatives is likely dominated by lobbyists and others who are either trying to gain access to government officials or sell it to the highest bidder. More than one-sixth of the 940 bundlers for Bush’s campaigns came from the increasingly melded ranks of lobbyists, lawyers and professional political operatives–people whose professions have come to require such access. More importantly, they are people who have the connections necessary to raise $100,000 in other people’s money.

The Bush campaign, for its part, monitored the bundler’s progress closely. It issued each one a tracking number to use on each check. This number, as Thomas Kuhn, the head lobbyist for the electric power industry, explained in a 1999 fundraising letter, helped “ensure that our industry is credited, and that your progress is listed among the other business/industry sectors.”

Conor Kenny is the editor of Congresspedia.org, a collaborative online citizen's encyclopedia on Congress. He is also a former money in politics investigative researcher for Public Citizen.