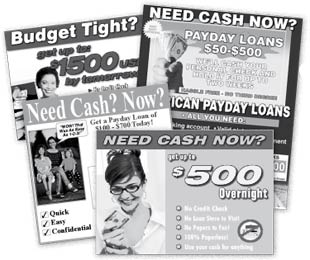 To thwart legislation that put caps on payday lending rates, Republican lawmakers in Oregon had to pass it

When Oregon voters head to the polls this fall they’ll have 13 ballot initiatives to consider, everything from parental notification for teenage abortion to strict tax-caps. But they won’t get a chance to vote to limit interest rates on payday loans. A coalition of progressive groups called Our Oregon had hoped to gather enough petitions to put the issue on the ballot, but they never got the chance: Once Republican lawmakers caught wind of the plan, they became so scared of its potential political impact that they passed the proposed referendum word-for-word in the state House.

Payday loans are short-term, high-interest loans. Borrowers receive an immediate cash payment and, in exchange, write a post-dated check that can be cashed once they receive their next paycheck. The interest rates are far, far higher than loans through commercial banks, up to 500 percent (and in some cases, as high as 900 percent). Most perniciously, the loans can be rolled over for additional fees, which means customers can end up paying more interest than the principal they’d originally borrowed. In the last few years the industry has exploded: From 2000 to 2003, the number of payday lenders more than doubled, and the industry’s sales quadrupled to $40 billion.

In response, states from Florida to Arkansas to Illinois have been cracking down on payday lenders, imposing strict disclosure regulations, limits on the number of rollovers and interest caps. Until recently, Oregon was one of only seven states with no such caps, and the lack of regulation served as a magnet for the industry, with out-of-state companies flocking in to set up shop.

As payday lending exploded, so too did horror stories about cyclical debt and eye-popping interest rates. Portland resident Maryann Olson, a 58-year old retired nurse on disability, didn’t have the $150 she needed to buy orthopedic shoes, so she took out a payday loan. Several months later, she owed $1,900 to six different lenders. After housing and medical costs, she had so little money left over to pay down her debt, she says she “was going out to other payday loaners, trying to rob from Peter to pay Paul.”

Social service agencies around the state began noticing more and more of their clients in situations like Olson’s. Angela Martin, Our Oregon’s director of economic-fairness campaigns, says that at the Oregon Food Bank, where she previously worked, the fastest-growing type of clientele was working families. “They couldn’t make room for the grocery bill,” she says, “because they had to pay the payday lender.”

So beginning in 2004, a coalition of faith-based social service agencies, along with Oregon State PIRG and the Oregon Food Bank, started pushing in the state legislature for bills that would have limited interest rates and rollovers. Thanks in large part to the hundreds of thousands of dollars the industry spends on lobbying, the opposition was stiff. The bill passed the Democratic-controlled Senate last year, but in the Republican-controlled House, Speaker Karen Minnis wouldn’t allow it a hearing.

Then last fall Our Oregon started plotting its election-year strategy. “Most of the major political groups hadn’t really been tracking” the payday lending issue, says Our Oregon Strategic Consultant Kevin Looper. “But when we started Our Oregon, we wanted two things out of it–permanent coalition building capacity, and to fill in the gap we saw strategically, which was all around advancing basic economic fairness.”

So the coalition commissioned a poll. “We got really great, clean-ballot language that said we’ll limit the interest rates on payday loans,” says Looper. “We polled on it, and it literally polled off the charts. Our pollster said, ‘I never see polls like this.’ It’s just unbelievably rare to find an issue that’s 70-30, and you win every one of the demographic groups.” Including, Looper says, registered Republicans.

“Who the heck can be on the side of charging 521 percent interest rates for people that are vulnerable and desperate? I feel personally for the people that are in that spot, and I must say I also like the box it puts conservatives in politically.”

One of those boxed in was Minnis, who Our Oregon targeted with actions in her district that called attention to the fact she’d taken $13,500 from the industry and blocked the reforms. When the governor called a special session in April to deal with school funding, it was Minnis who demanded her colleagues put the payday lending bill on the agenda as well.

Republican lawmakers “were caught between a rock and a hard place,” says Martin. “Registered Republicans out in the community said, ‘Wait a minute, this is good legislation.’”

Lawmakers tried to thread the needle by voting for the bill during the special session, but they attached a provision delaying the law’s implementation for 15 months, hoping to take the issue off the table for the fall elections and then gut the reform next year. They even said as much. “I’m rising in support of this [bill],” said Republican State Sen. John Lim, “there’s no question about it. But this bill is not going to solve the problem. … We need to come back and look at this bill again, whether it’s going to work or not.”

In other words: I’m voting for it before I vote against it.

Luanne Stoltz, vice president of the Oregon Community Financial Services Association and proprietor of Anydays Payday Loan in Oregon, says the regulations are well-intentioned, but counterproductive. Stoltz says her customers are grateful for the service she provides. “It’s like going to buy a latte at Starbucks,” she says. “You pay more than you should, but it’s convenient.”

But if the service is so popular, why did lawmakers nearly fall over themselves to pass the interest cap? “We’re a society that loves to have victims,” Stoltz says. “There are a very small percentage of our customers who frankly abuse the product. I feel bad for them when this happens, but they are not the ones who suffer: I’m the one without the money! … They chose to take out more payday loans than they could pay, and now they’re in a pickle. They make a great story, a sad sob story. It’s the picture we love in America–the poor down-and-out person, we have to help them, and the bad person who loaned them the money is the reason they’re there.”

So far, rhetoric like this hasn’t proven particularly effective. Since its victory in April, Our Oregon has pushed forward local payday lending regulations in eight municipalities, including conservative cities like Gresham and Oregon City. “If you look at the counties where this is passing at the local level, they’re red counties,” Martin says.

In recent years, conservatives have utilized wedge issues to particular effect at the state level. In 2004, Karl Rove engineered a series of anti-gay marriage ballot initiatives in key battleground states designed to draw conservatives to the polls and cut into the progressive base. Many political observers credit the Ohio measure for Bush’s high performance among the state’s African Americans. He won 16 percent of the black vote there, nearly twice the percentage he’d won in 2000. That margin proved the difference.

But while voters might be to the right of the Democratic Party on social issues, they are also, by and large, to the left of the Republican Party on economic issues. Surveying the 2004 National Election Study data, Scott Winship at the Democratic Strategist’s blog recently wrote that “adults are conservative on … values (62 to 38), but liberal on economic/social policy (57 to 43) and fiscal policy (60 to 40).”

In other words, progressives have the ability to leverage their own wedge issue: basic economic fairness.

“I have a data guy who’s gone through the ballot measure results from every part of [Oregon] by precinct and house district,” says Looper. “Going back 10 years, every time they move regressive social issues, we lose some share of base, and every time we move economic populist stuff, like minimum wage, we pick up ground. Take the speaker’s district: We lost the gay marriage issue by more votes than we lost even the presidential race in her district. But we won minimum wage by much more than they won their legislative district.”

Oregon’s 1996 ballot initiative raising the state’s minimum wage is just one of several that have been passed across the country, including in red states likes Florida and Nevada. This year, minimum-wage raises will be on the ballot in six states, and just recently, in a script remarkably similar to what happened in Oregon, state Republicans in Michigan rushed to unanimously pass a bill to increase the minimum wage in hopes of killing the issue before the issue killed them at the ballot box.

“It’s been very exciting to show Democrats that when you get out there on an economic issue and show that you are on the side of everyday working folks, there’s power in that nexus,” Looper says. “Politics is about winning. When you convince politicians that you can make ‘em lose, even the regressive ones tend to pay attention.”