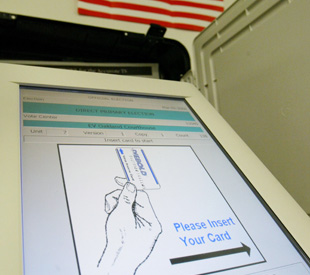 In the wake of HAVA, voters increasingly face electronic voting machines at the polls.

Blowing the Whistle on Diebold

On July 13, the Pensacola, Fla.-based law firm of Robert F. Kennedy Jr. filed a “qui tam” lawsuit in U.S. District Court, alleging that Diebold and other electronic voting machine (EVM) companies fraudulently represented to state election boards and the federal government that their products were “unhackable.”

Kennedy claims to have witnesses “centrally located, deep within the corporations,” who will confirm that company officials withheld their knowledge of problems with accuracy, reliability and security of EVMs in order to procure government contracts. Since going into service, many of these machines have been linked to allegations of election fraud.

In the wake of alleged vote count inconsistencies and the “hanging chad” debacle of 2000, Congress passed the Help America Vote Act (HAVA) in 2002. HAVA appropriated $3 billion to replace voting equipment and make other improvements in election administration. Diebold, Election Systems & Software and Sequoia Systems secured the lion’s share of nearly half that sum in contracts to purchase EVMs. All 50 states have received funds and many are hurriedly spending it on replacing lever and punch card machines in time for November.

According to the Election Assistance Commission, more than 61 percent of votes in the 2004 presidential election were cast and/or tallied by EVMs. Election Data Services, a Washington, D.C.-based consulting firm, estimates that the figure will jump to 80 percent by November, which will see elections for all 435 seats in the House of Representatives.

Matt Schultz, an attorney with Kennedy’s law firm, Levin Papantonio, describes the process of competition for HAVA’s contractor funds as “a race to the bottom.” “There is no question in my mind that these companies sacrificed security and accuracy, mass-producing a cheap product to cash in on tons of federal money,” Schultz says. “It’s an industry-wide problem.”

Qui tam lawsuits stem from a provision in the Civil False Claims Act, which Congress passed in 1863 at the behest of President Abraham Lincoln to respond to price gouging, use of defective products and substitution of inferior material by contractors supplying the Union Army. The provision allows private citizens to file a suit in the name of the U.S. government charging fraud by government contractors and other entities that receive or use government funds.

Long known as “Lincoln’s Law,” it is now commonly referred to as the “Whistleblower Law.” Since the mid-’80s, qui tam recoveries have exceeded $1 billion, mostly after exposing medical and defense overcharging.

Mike Papantonio, partner in the law firm and co-host with Kennedy on “Ring of Fire,” a weekly radio show on the Air America Network, explains the value of the qui tam approach. “The problem with injunctive relief, or [a writ of] mandamus, or prohibition-type writs, is it all comes down to politics. … How do you bring injunctive relief with [Ohio Secretary of State Kenneth] Blackwell? How do you get [Florida Governor] Jeb Bush to do anything? They won’t. You have to move outside of that political realm.”

In 2004, Blackwell was in charge of implementing state and federal election laws, while, at the same time, co-chairing the state’s 2004 Bush/Cheney Campaign. Under his watch, election officials neglected to process registration cards from Democratic voter drives, purged tens of thousands of voter registrations and distributed EVMs unevenly, leaving some voters waiting up to 12 hours. According to Kennedy, “at least 357,000 voters, the overwhelming majority of them Democratic, were prevented from casting ballots or did not have their votes counted.” Ohio was decided by 118,601 votes.

The contents of the suit could be under judicial seal for at least 60 days while the U.S. Department of Justice considers whether or not to join the suit. If U.S. Attorney General Alberto Gonzales decides not to join the suit, Levin Papantonio may approach individual state attorneys general. If no one joins, the firm is free to, as Papantonio puts it, “stand in the shoes of the Attorney General and fight on behalf of the taxpayers and the nation.”

“The single greatest threat to our democracy is the insecurity of our voting system,” warns Kennedy. “Whoever controls the voting machines can control who wins the votes.”