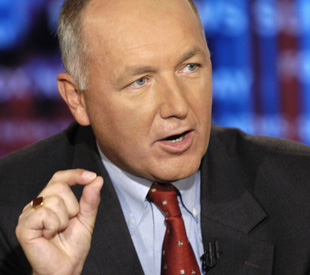 Rep. Peter Hoekstra (R-Mich.) has finally spoken out against the Bush administration's lack of interest in congressional oversight.

Who Is Hoekstras Secret Source?

Russell Tice may not be the one who tipped off Rep. Peter Hoekstra, but he wanted to be.

Rep. Peter Hoekstra (R-Mich.) must be enjoying himself. Since the New York Times released his May 18 letter to President Bush in which Hoekstra, chairman of the House Permanent Select Committee on Intelligence, condemned the intelligence community for keeping secrets from Congress, he has been feted as a Republican who is willing to stand up to the administration. But for more than six months, the congressman has been keeping his own secrets–and someone else’s. On December 16, and again on April 25, former intelligence agent Russell Tice wrote Hoekstra, asking to testify before the committee about “probable unlawful and unconstitutional acts conducted while I was an intelligence officer with the National Security Agency and with the Defense Intelligence Agency.”

Hoekstra told the Times that the administration only briefed the House Intelligence Committee on a “significant” intelligence program after an unnamed whistleblower alerted him of its existence. Whether or not Tice’s are the programs to which he is referring, he has known for months that at least one former agent was concerned enough to step forward and testify about the agencies’ abuses and their failure to keep Congress apprised of their activities.

Tice, who served as technical intelligence specialist on classified national security programs at both the NSA and the DIA, told Hoekstra in his December 16 letter that he wanted to testify about “probable unconstitutional acts” specifically involving the Secretary of Defense, the Deputies Chief of Staff for Air and Space Operations, and the Director of the National Security Agency. He put himself at Hoekstra’s disposal, requesting only that he be certain that everyone who would be present for his testimony was cleared to hear highly classified government secrets.

He did not hear back from the committee until March 17, 2006, when he met with staff members who told him that they could not hear his full testimony because they lacked the appropriate clearance. “I hinted and I used generalities,” Tice said of his conversation with the staffers. “I could not directly tell them the programs.”

The staffers report to Hoekstra directly. It is unlikely that they failed to outline Tice’s concerns. Yet Hoekstra waited another two months to write to the president, and six more weeks before making his concerns public.

Tice has not been fighting his uphill battle to testify alone. Reps. Christopher Shays (R-Conn.) and Dennis Kucinich (D-Ohio), respectively, chairman and ranking minority member of the House Subcommittee on National Security, Emerging Threats, and International Relations, wrote to Hoekstra on March 6, saying that if he did not intend to investigate Tice’s claims, they would do so under their own jurisdiction. “The allegations made by Mr. Tice are very serious. We plan to investigate his claims as thoroughly as possible, but we would appreciate your input by March 10, 2006, before we proceed further,” they wrote. According to a senior staffer on the Committee on Government Reform, Hoekstra didn’t respond, nor did he tell them that he planned to have staffers meet with Tice. The staffer said that the subcommittee learned of the March 17 meeting from Tice himself.

Tice also says that he met with staffers from the Senate Armed Forces committee to discuss the abuses he witnessed, but was not asked to testify before the committee as a whole.

On April 25, after waiting longer than a month to hear back from the House Intelligence Committee, Tice wrote a second letter to Hoekstra. He cited U.S. Code Title 10, which regards communication about “special access programs”–classified operations of the type that Tice worked on between the Secretary of Defense and Congress. Each year, the Secretary of Defense is required to submit to the defense committees a list of new special access programs along with justification of their designation as such. Congress must be notified of changes in ongoing programs. However, these requirements can be waived “if the Secretary determines that inclusion of that information would adversely affect the national security.”

Tice says that such a determination has been made regarding the programs he wants to testify about. He also says that the NSA maintains secrecy by conducting exclusively internal reviews instead of going to Congress. It is not clear that the executive branch constitutionally has the power to withhold clearance from committee members who wish to hear about special access programs, but the tactic has been largely successful so far.

Shays and Kucinich have worked to reverse the trend. On May 17, the day before Hoekstra wrote a letter to President Bush criticizing the intelligence community’s failure to fulfill its legal duty to keep the House and Senate Intelligence committees apprised of its activities, Reps. Shays and Kucinich sent their own letter to Lt. Gen. Keith B. Alexander, director of the NSA, about Tice’s situation. They cited a House Rule that mandates that their subcommittee “shall review and study on a continuing basis the operation of Government activities at all levels with a view to determining their economy and efficiency.”

Essentially, Shays and Kucinich were telling Alexander that they intended to hear Tice whether or not the NSA granted them official clearance; that their right to hear him was written into their own rules. They gave a May 26 deadline for providing “a more complete legal analysis from NSA on the basis for its objections, if any, to the Subcommittee proceeding in the manner proposed.” According to the senior staffer, the NSA never replied. But Tice says that he has not been asked to testify, nor has he been contacted recently by anyone from the subcommittee. Shays, however, continues to push for legislation that would give greater protection to national security whistleblowers.

“Right now there’s no oversight,” Tice said on May 26, the day the deadline expired. Tice, recalling an NSA colleague’s comment during a meeting at the Pentagon, said, “I had an army officer say we’re not accountable to anyone.”

Without strong support from Congress, Tice will not be able to testify: for individuals with security clearance, revealing classified national security information to anyone not cleared to hear it is a jailable offense. In a January 9 letter to Tice, Renee Seymour, director of NSA Special Access Programs, told Tice that his concerns would be investigated internally. Although Tice has the First Amendment right to petition Congress for redress of grievancesóa fact that Seymour emphasized in her letteróhe is in reality unable to do so until a full committee is granted clearance to hear the details of the programs about which he wishes to testify. While he has met, at different times, with staffers from both the Senate Armed Services Committee and the House Intelligence Committee, he has never been able to testify fully because no one to whom he has spoken has clearance to hear about the programs’ details.

Perhaps the release of Rep. Hoekstra’s May 18 letter signals a change, or perhaps it is just another, slightly louder, shuffle of the legislative branch’s feet before they settle back into complacency. Hoekstra is not the first to confront the executive branch about possible abuses of power. And regarding Tice’s situation and his efforts to blow the whistle, Hoekstra’s is hardly the record of a gadfly. Quite the opposite: until recently, he seems to have passed the job of dealing with the issue on to anyone he could, from his own senior staff members to the chairmen of other committees. If his grumbling about oversight and balance turns into something tangible, it might signal a change in the winds. Or it might just be whistleblowing in the dark.

Leah Nelson graduated from Columbia University's J-school in 2006. She is currently freelancing and job-hunting, and is cautiously optimistic about the future. Nelson lives in New York with her fiancé, Jason, as well as lots of books and an unreasonably large TV. This is her third article for In These Times.