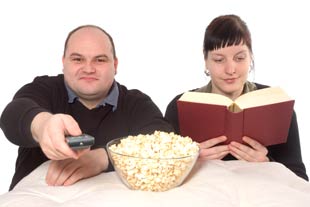 Why Hemingway Is Chick-Lit

“When women stop reading, the novel will be dead,” declared Ian McEwan in the Guardian last year. The British novelist reached this rather dire conclusion after venturing into a nearby park in an attempt to give away free novels. The result?

Only one “sensitive male soul” took up his offer, while every woman he approached was “eager and grateful” to do the same.

Unscientific as McEwan’s experiment may be, its thesis is borne out by a number of surveys conducted in Britain, the United States and Canada, where men account for a paltry 20 percent of the market for fiction. Unlike the gods of the literary establishment who remain predominantly male–both as writers and critics–their humble readers are overwhelmingly female.

In recent years, various pundits have used this so-called “fiction gap” as an opportunity to trot out their pet theories on what makes men and women tick. The most recent is New York Times columnist David Brooks, who jumped at the chance to peddle his special brand of gender essentialism. His June 11 column arbitrarily divided all books into neat boy/girl categories–“In the men’s sections of the bookstore, there are books describing masterly men conquering evil. In the women’s sections there are novels about … well, I guess feelings and stuff.” His sweeping assertion flies in the face of publishing industry research, which shows that if “chick-lit” were defined as what women read, the term would have to include most novels, including those considered macho territory. A 2000 survey found that women comprised a greater percentage of readers than men across all genres: Espionage/thriller (69 percent); General (88 percent); Mystery/Detective (86 percent); and even Science Fiction (52 percent).

Brooks’ real agenda, however, is not to deride women’s fiction, but to promote the latest conservative talking point: blaming politically correct liberals for a “feminized” school curriculum that turns young boys “into high school and college dropouts who hate reading.” According to Brooks, we have burdened little boys with “new-wave” novels about “introspectively morose young women,” when they would be better served by suitably masculine writers like Ernest Hemingway. “It could be, in short, that biological factors influence reading tastes, even after accounting for culture,” Brooks claims. “The problem is that even after the recent flurry of attention about why boys are falling behind, there is still intense social pressure not to talk about biological differences between boys and girls (ask Larry Summers).”

It takes a bizarre leap of logic to connect current school curricula to the reading habits of adult men. Moreover, there is no indication that men “hate reading”–women just read more fiction. Men out-read women by at least ten percentage points when it comes to nonfiction books–surely good news for the bestselling author of Bobos in Paradise.

To be fair, conservatives like Brooks are not the only talking-heads to resort to biological determinism in explaining the “fiction gap.” Psychologist Dorothy Rowe told the Observer that women like fiction because they have richer and more complex imaginations. “Women have always had to try to understand what other people are doing because women have always had to negotiate their way through the family,” she said. “They have always had to get their power by having a pretty good idea of what’s going on inside other people and using that knowledge to get them to do things.” Quite apart from the unintended implication that feminism is likely to fulfill McEwan’s worst fears–i.e., kill the novel–such arguments reproduce the worst kind of gender stereotypes: Women as sensitive, emotionally intelligent creatures; men as unreflective dolts.

Cognitive literary critic Lisa Zunshine, whose multidisciplinary field integrates the insights offered by cognitive science to better understand fiction, offers a more modest and nuanced hypothesis. Her book, Why We Read Fiction, argues that fiction as a literary form offers us pleasure because it engages our ability to mind-read, “a term used by cognitive psychologists, interchangeably with ‘Theory of Mind,’ to describe our ability to explain people’s behavior in terms of their thoughts, feelings, beliefs, and desires.” Fiction, therefore, “lets us try on different mental states.”

Women are more likely than men to enjoy reading fiction, period (as opposed to just reading about “feelings and stuff”), because “they generally want more input for their Theory-of-Mind adaptations,” says Zunshine. “They want to experience other ‘minds in action’–which is another way of defining ‘empathy’–much more than men do.”

Zunshine underscores the fact that such cognitive research is based on “average statistical scores,” and offers no guidance as to what individual men or women may read. Moreover, the biological difference between male and female Theory-of-Mind is small, and likely only accounts for a “somewhat greater” predilection for fiction among women.

But in a culture infused with polarizing messages about gender, such small differences can be magnified into vast disparities. If the act of reading novels today seems more “girly”–because of female-dominated book clubs or a publishing industry increasingly geared toward its most loyal customers, i.e., women–then men are less likely to do so. That’s partly why Jonathan Franzen worried about being endorsed by Oprah. Franzen told NPR, “I had some hope of actually reaching a male audience [for The Corrections] and I’ve heard more than one [male] reader in signing lines now at bookstores say ‘If I hadn’t heard you, I would have been put off by the fact that it is an Oprah pick. I figure those books are for women. I would never touch it.’ “

Desperate efforts to “macho” up the novel include Penguin’s “Good Booking” campaign, which sent out–who else?–beautiful models to award prizes of £1,000 each month to any British man under 25 caught in flagrante with one of its testosterone-friendly titles. The advertising tag line? “What women really want is a man with a Penguin.”

Apart from sex with beautiful models, men are also socialized to seek out activities that confer status–which, these days, sadly doesn’t include reading novels. According to novelist Walter Kirn, “If novelists have become culturally invisible–at least to today’s men–it’s partly because the life of a novelist offers few rewards to the traditional male ego. It’s not about power, glory and money,” unlike the adulation our culture reserves for rap stars, athletes and movie actors.

Don’t look now, but we may be headed back to the 19th century, when the novel was considered a low-status, frivolous, pastime of ladies of leisure, unfit for real men. As Margaret Atwood pointed out in a 1998 speech, “To trace the trajectory of the novel is to follow the struggle of the novelist–even, perhaps especially, the male novelist–to be taken seriously–that is, to raise the perception of his chosen form from that of a piece of silly frou-frou to the higher, more male realm of capital-A Art.” This project kicked into high gear in the 20th century–so much so that by 1935 Ernest Hemingway could blithely declare, “All modern American literature comes from one book by Mark Twain called Huckleberry Finn.”–and reached its peak during the chest-thumping Beat movement.

But were men more likely to read novels when Jack Kerouac ruled the literary world? The answer is unclear, primarily because industry research in this area has been erratic until recent decades. So, it’s hard to establish a definitive link between the size of male readership and the status accorded fiction in society–at least over the past 100 years. Nor do we know if these trends hold true in other, non-English speaking cultures.

What is clear is that the novel seems to be reverting to its origins as a feminine hobby, and hence is in danger of being toppled off its high artistic perch. Explaining his newspaper’s decision to radically cut down on fiction reviews, New York Times editor Bill Keller told a Poynter columnist, “The most compelling ideas tend to be in the non-fiction world.” Others, like Toronto Star book columnist Phillip Marchand, are happy to quote their 19th century forbears like poet Samuel Taylor Coleridge–“Where the reading of novels prevails as a habit, it occasions in time the entire destruction of the powers of the mind.”–to conclude, “And if non-fiction can provide examples of fresh and precise use of language, and enlargement of our powers of sympathy and imagination, there’s no reason to insist, in the case of male readers, that it make way for fiction.”

It’s a good thing, then, that the great male novelists can still rely on us girls to finance their literary careers.