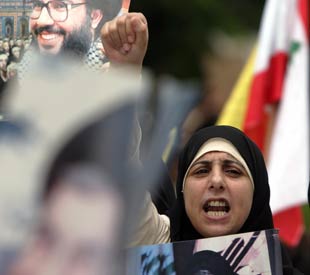 Supporters of Hezbollah hold posters of Hassan Nasrallah during a protest in Beirut on July 30.

Just how much influence does the Islamic Republic wield over Hezbollah?

The conflict in Lebanon between Israel and Hezbollah had hardly begun when the Bush administration and its neoconservative supporters began blaming Iran for the conflagration. On July 25, Henry Crumpton, the State Department’s coordinator for counterterrorism, told a reporter that Iran is “clearly directing a lot of Hezbollah actions. Hezbollah asks their permission to do things, especially if it has broader international implications.” Meanwhile, in the July 24 Weekly Standard, William Kristol called Hezbollah’s fighting an “act of Iranian aggression” and suggested “we might consider countering [it] … with a military strike against Iranian nuclear facilities.”

However, giving Iran another tongue lashing, or worse, deciding to attack it, will do nothing to stop the violence in the region. Not only is there no evidence that Iran had a role in instigating this round of violence, the possibility itself is unlikely.

Iran’s control over Hezbollah has been steadily declining since approximately 1996, during the reformist presidency of Mohammad Khatami. Money does continue to come “from Iran” to support Hezbollah, but not the Iranian government. Instead, it’s private religious foundations that direct the bulk of support, primarily to Hezbollah’s charitable activities. Nor are the amounts crucial to Hezbollah’s survival; even the high estimate frequently cited in the press–$200 million per annum–is a fraction of Hezbollah’s operating funds. However, the most important reason for not targeting Iran for the continued fighting in Lebanon is that this conflict is antithetical to Iran’s interests.

Neoconservatives clearly have another agenda in attacking Iran besides stopping Hezbollah. By blaming Iran for this latest flare-up, neoconservatives are following their decade-long program to encourage a military attack against the Islamic Republic.

The broad assertion that Iran supports Hezbollah is verifiable, but it is important to understand what the nature of this support is, and the extent to which Iran is able to influence the actions of this Shi’ite Lebanese group.

Since 90 percent of Iran’s population is Shi’ite, its citizens had an undeniable interest in the fate of its co-religionists in Lebanon following the Revolution of 1978-79. Like Iranians, the Lebanese Shi’ite community was under oppression both from Sunnis and Maronites. Moreover, Palestinian refugees, settled in Lebanon without consultation with the Shi’ite community, served as a drain on weak local economic resources and drew fire from Israel. The Shi’ites felt helpless and frustrated. The successful revolution in Iran was enormously inspirational to them. While the Iranian central government was weak and scattered after the Revolution, semi-independent charitable organizations, called bonyad (literally, “foundation”) sponsored by individual Shi’ite clerics began to help the fledgling Hezbollah organization establish itself as a defense force to protect the Shi’ite community. This was simply not state support. Given the semi-independent corporate nature of Shi’ite clerics, especially in the early days of Iran’s revolution, when internal power struggles were endemic, there was little the Khomeini government could do to curtail these operations.

Now, after nearly two decades, this ad hoc export of Iranian revolutionary ideology may have succeeded too well. Whereas today the bulk of the Iranian population has at least some doubts about their government, Hezbollah maintains a stronger commitment to the symbolic legacy of the Iranian Revolution than Iranians, according to Georgetown University professor Daniel Byman. In a 2003 Foreign Affairs article, Byman pointed out that, “[Iran] lacks the means to force a significant change in the [Hezbollah] movement and its goals. It has no real presence on the ground in Lebanon and a call to disarm or cease resistance would likely cause Hezbollah’s leadership, or at least its most militant elements, simply to sever ties with Tehran’s leadership.”

In short, Hezbollah has now taken on a life of its own. Even if all Iranian financial and logistic support were cut off, Hezbollah would not only continue, it would thrive.

Hezbollah has achieved this independence by becoming as much a social welfare and political organization as a militant resistance organization. In a 2004 speech, Dwight J. Simpson, a professor of international relations at San Francisco State University, reported that it had “12 elected parliamentary members…[and] many Hezbollah members hold elected positions within local governments.” At that time, the group had already built five hospitals and was building more. It operated 25 primarily secular schools, and provided subsidies to shopkeepers.

The source for their money, Simpson reported, is zakat–the charitable “tithe” required of all Muslims. The Shi’ites, having seen their co-religionists in Iraq succeed in initial elections there in 2005, had hopes that they too would assume the power in Lebanon that accorded with their status as the nation’s largest community, approximately 40 percent of the population. The growth of Hezbollah’s charitable operations increased non-state-level financial support for the organization not only from Iran, but from the rest of the Shi’ite world, since formalized charity is a religious duty. As this charitable activity increased, Hezbollah was on the road to ceasing its activities as a terrorist group and gradually assuming the role of a political organization. Even in its current engagement with Israel, its “terrorist” activities have been reframed as national defense, especially as Hezbollah began to use conventional military forces and weapons.

Many of these weapons, it is claimed, have been acquired from Iran over the years, but even this is not fully verified. The rockets used by Hezbollah have been tentatively identified as Katushya rockets, of the form manufactured by Iran, and known as Fajr-3 and Fajr-5. But the United States has not been able to identify that these rockets are absolutely Iranian.

Moreover, although it is certainly possible that branches of Iran’s Islamic guard may be operating in Lebanon without the full knowledge of the central government of Iran, no country has yet been able to verify their presence in the current conflict, and rumors that they have aided in the firing of the rockets have been vehemently denied by Hezbollah’s leader, Hassan Nasrallah. Given the loose and ambiguous nature of the Iranian government’s control over support for Hezbollah, claims by U.S. officials that Iran has an organized state-level support system for such activities are clearly exaggerated.

Added to all of this is the fact that the Lebanese violence does not serve Iran’s political purposes. The verbal attacks of its president, Mahmoud Ahmadinejad, against Israel would cause it to be targeted if Israel were ever involved in a wider conflict with the Islamic world. Although Israeli Prime Minister Ehud Olmert has claimed that Iran instigated this attack to draw attention away from criticism of its nuclear development program, this scenario seems far-fetched. Indeed, Iran’s strategic situation has certainly been worsened by this fighting. Kenneth Katzman, senior Middle East analyst at the Congressional Research Service, recently told Voice of America: “Iran is viewed, widely viewed, as at least complicit in what is going on, supporting Hezbollah. And that is likely to make some of the fence-sitters, I guess Russia and China perhaps, take a dimmer view of Iranian intentions and perhaps be more amenable to U.S. and other arguments that Iran is playing a destabilizing role in the region and needs to be confronted by the [U.N. Security] Council.”

Why would the United States repeat such unfounded assertions with such incessant regularity as if they were established fact? Aside from their continuity with 27 years of ongoing attacks against Iran, such assertions accord with a longstanding U.S. foreign policy myth that believes terrorism cannot exist without state support. If a state is needed to explain the continued existence of groups like Hezbollah, then Iran is an ideal candidate. Ergo, the connection must exist. Such claims serve to bolster the central, but fallacious, political doctrine for the Bush administration that the Global War on Terrorism really exists.

The alternative is to understand that terrorism is fundamentally community-based. Sub-state groups with grievances that they feel cannot be addressed in any other way resort to terrorism as a way of increasing attention to their plight and pressuring those whom they perceive to be oppressing them. Though they may welcome external financial support, the impetus and motivation for terrorist groups’ actions is not dependent on it. Indeed, the more pressure they are subjected to, the stronger their collective will to resist increases.

When this dynamic is understood, the problems of addressing terrorism also come into focus. Rather than looking for global fantasy structures such as al-Qaeda and their state supporters, the international community needs to employ methods to address the needs of sub-state groups, while simultaneously working to curtail their activities as conditions improve. For the Shi’ites in Lebanon, it may be far too late to employ such a strategy.

William O. Beeman is Professor of Anthropology and Middle East Studies at Brown University. His most recent book is The "Great Satan" vs. the "Mad Mullahs": How the United States and Iran Demonize Each Other.