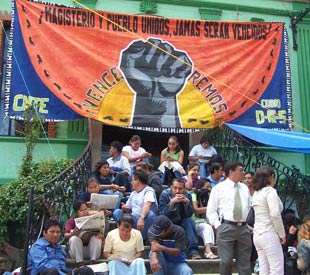 Oaxacan teachers take it to the streets.

Thousands of teachers go on strike in Oaxaca.

Thousands of protestors have forced the Oaxaca state government into a bizarre sort of roaming exile, floating between luxury hotels on the outskirts of the capital. Governor Ulises Ruiz Ortiz worked from the guarded Hacienda Los Laureles Hotel before he went underground. No one knows where he is now. The dispossessed state senators declared the elite Hotel Misión San Felipe as its “alternate headquarters,” only to be booted after protesters warned the hotel management that they would “peacefully take over the hotel” if the senators were allowed to hold sessions there.

Oaxaca is a city under siege, but strangely so. In Oaxaca’s occupied town center, tourists browse through hand-woven skirts, wool blankets and painted wooden turtles as they walk amidst the tents and improvised kitchens of the city’s rebels. Shoppers on their way to outdoor cafés duck under posterboard signs calling for the governor’s ousting while marimba players compete for listeners with loudspeakers broadcasting the also-occupied university radio station.

Since May 22, tens of thousands of teachers and administrative workers belonging to Oaxaca’s Section 22 of the National Union of Education Workers have been on strike, camping out in the colonial town square, shutting off highways, blocking government buildings and marking their territory–all of downtown Oaxaca–with political graffiti, reading, “The movement has no leaders; it is from the grassroots!” The teachers’ demands include school uniforms and shoes for all students, more scholarships, and an increased budget for school buildings and equipment.

On June 14, Ruiz Ortiz sent riot police into the town square before dawn to disband the teachers’ encampment. Police fired tear gas grenades from helicopters while more than 1,000 officers charged in, swinging their batons at anything that moved. Most of the 600 sleeping teachers scrambled out of their tents and retreated down side streets to seek cover; many were caught and beaten. Shortly after dawn the teachers regrouped, gathered reinforcements of up to 30,000 teachers and outraged residents bearing rocks, sticks and iron rods, and made their way back into the town square. The police apparently did the math and fled without a second round.

The failed attempt to violently uproot the teachers–coming only five weeks after police brutality in San Salvador Atenco erupted in a national scandal–backfired dramatically: It led disenchanted local residents to hit the streets and thicken the teachers’ civil disobedience encampments. On June 16, teachers and locals organized a massive march to demand Ruiz Ortiz’s immediate resignation. With one day’s notice, they put half a million people on the streets in a metropolitan area of one million inhabitants.

“As of June 14, our movement ceased to be a teachers’ movement, and became a social movement, a movement of the people,” Juan de Dios Garcia Santiago, a Section 22 union representative, told me outside of the blockaded entrance to the state attorney general’s office. The burgeoning movement’s first show of political strength was to promote and carry out a statewide “punishment vote” (voto de castigo) on July 2 against the presidential candidate of the governor’s party, Roberto Madrazo of the Institutional Revolutionary Party (or PRI). The PRI had won the presidential vote in Oaxaca since the party’s creation in 1929. This time, however, they got punished.

Emboldened by having humiliated the PRI, on July 5, representatives from Section 22, towns and villages across the state, indigenous communities, religious groups, collectives and non-governmental organizations–all spontaneously pulled together into a horizontal organizing bloc called the Popular Assembly of the People of Oaxaca (APPO)–declared their citizens’ assembly to be the governing body of the state. The teachers then agreed to suspend their original list of demands and join with the APPO in fighting to bring down Ruiz Ortiz.

The APPO is explicitly trying to “create ungovernability” in Oaxaca to force Ruiz Ortiz to either step down, or be ousted by the Mexican Congress. In addition to the months-long occupation of downtown Oaxaca, beginning on July 26, the APPO set up encampments outside of every major state government building, including the state legislature and the governors’ offices. They have all been closed since.

On August 1, more than 3,000 women–all members of APPO–marched through town, banging on pots and pans with spoons and meat tenderizers, chanting into the blanket of sound: “Whether he wants to go or not, Ulises is out of here!” The women went to the studio of the state television station, CORTV, and demanded an hour of live transmission to tell their version of what happened on June 14. The director of the station denied their request. But the women walked right past her, pots and pans in hand, took over the station, and broadcast live for over an hour. And they are still there, showing documentaries and broadcasting live daily.

“The struggle in Oaxaca is, in many respects, a precursor of other struggles yet to come,” says Luis Hernandez Navarro, an early member of the teachers’ movement and now the opinion pages editor of the national newspaper, La Jornada. “Oaxaca contains the core contradictions in Mexican society and anticipates conflicts that will surge in other states.”

Electoral fraud, authoritarian rule, and the combination of the teachers’ highly organized protests and the governors’ unsuccessful raid led to a governance crisis with the teachers becoming the backbone of popular resistance, Navarro says. “This fight will continue; it will not fade away.”

John Gibler, a former Global Exchange Media fellow, has reported from Mexico for various publications including Colorlines and Yes!. He is the author of Mexico Unconquered: Chronicles of Power and Revolt (2009) and To Die in Mexico: Dispatches from Inside the Drug War (2011).