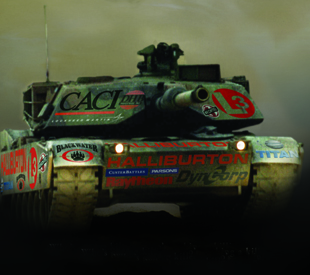 Privatized Warfare: The Summer of Discontent

A new documentary by Robert Greenwald - “Iraq For Sale” - details the corporate profiteering of the increasingly privatized U.S. military.

In coordination with the release of Robert Greenwald’s new documentary, Iraq for Sale: The War Profiteers, In These Times and its progressive media partners are covering the issues and individuals impacted by privatization in Iraq. All media partners are members of The Media Consortium, a new network of leading progressive independent journalism organizations. Read all the stories here:

AlterNet
Bush's Worst Pentagon Downfall: Outsourcing Torture, by Joshua Holland
There couldn't be a more appropriate symbol of the Bush era than the Pentagon outsourcing torture in the war zones of the New American Empire to profit-hungry companies like CACI.

The American Prospect
The Unaccountables, by Tara McKelvey
Forget the soldiers: The 25,000 civilian contractors in Iraq are an occupying army unto themselves. Some may have engaged in torture -- and, by evident design, they can’t be prosecuted for their crimes.

ColorLines
Doing the Dirty Work, by Pratap Chatterjee
Asian migrant workers perform the menial labor on U.S. military bases in Iraq, where trafficking has been standard practice since the invasion began.

Ms. Magazine
Crude Awakening: U.S. Policies in Afghanistan and Iraq Sell Out Women in Favor of Oil, by Martha Burk
Whether supporting gender apartheid abroad, or sacrificing feeding programs for U.S. women and children at home so that ExxonMobil can get a tax break ... U.S. priorities are consistent: Oil wins over women's rights hands down.

For private contractors fighting wars and racking up huge profits without being plagued by pesky accountability, this hasn’t been the happiest summer.

Sure, some solace could be had in the decision of a federal judge in August to overturn a guilty verdict against Custer Battles, the company providing “risk management and security consulting services” in Iraq. The judge concluded that the company couldn’t have defrauded the U.S. government with false invoices. While the company had been convicted of defrauding the Coalition Provisional Authority (CPA), which ran Iraq from 2003 to 2004, the judge said that despite being funded with taxpayer dollars, the CPA wasn’t technically part of the U.S. government.

But then again, in August, a federal jury in Raleigh, N.C., set a legal precedent by convicting CIA contractor David Passaro for his role in the death of a detainee under interrogation in Afghanistan, marking the first time an American civilian had been held criminally accountable for abuse in Afghanistan and Iraq. A couple of weeks later, Blackwater USA–the “professional military, law enforcement, security, peacekeeping, and stability operations firm”–lost its attempt to dismiss the wrongful death lawsuit brought by the families of four employees brutally killed in Fallujah. In late July, the construction firm Bechtel couldn’t escape being audited, and lost a $50 million contract for mismanaging the long-delayed building of a Basra children’s hospital.

And at the end of August, a new report from the Institute For Policy Studies and United for a Fair Economy exposed the obscene profits CEOs are making from the “war on terror.” The Executive Excess report found that since 9/11, the 34 chief executives of the top publicly traded defense contractor corporations have more than doubled their salaries, taking in $984 million and making 44 times that of a general. The average defense contractor CEO makes 308 times that of a private.

September doesn’t look so hot for Iraq War profiteer supporters either. A new documentary from Robert Greenwald, Iraq For Sale (available on DVD at http://iraqforsale.org) shines a fresh, and harsh, spotlight on major contracting corporations. The film tells the story of our privatized military through the voices of former employees, family members of murdered contractors, and actual soldiers who have seen how contractors in Iraq operate.

The film offers up interviews with survivors and the kin of victims from the “Good Friday Massacre,” when truck drivers for Halliburton subsidiary KBR were recklessly sent out on a job through hostile territory in military-marked vehicles. Insurgents attacked the convoy, six KBR truckers died, and one other driver remains unaccounted for.

Says one widow, “These men went to do the right thing [and] they were totally taken advantage of … [Halliburton] knew, they knew, that there was more than a good chance that they would be killed.” A surviving trucker coolly opined, “It’s about contracts … fulfilling the contract and replacing us if we died. [Halliburton] wanted to continue doing business with the Army, whatever the risks were.”

A former military interrogator at Abu Ghraib who worked next to corporate interrogators from CACI International describes his experience this way: “We were uncertain–we knew what our chain of command was … but what’s the CACI chain of command?” As Salon.com’s Mark Benjamin says, the Pentagon was “desperate” for intelligence, “panicked,” and hired “a bunch of contractors who didn’t know what they were doing.”(CACI’s sorry role in the Abu Ghraib scandal didn’t stop its CEO from attacking the authors of the Executive Excess report last year for criticizing defense contractors who earn far more than generals, arguing that “Companies are accountable for profitable performance and sustained customer satisfaction. Generals are not.”)

A former employee of Titan, one of the largest providers of linguists in Iraq, explains that “hostility against American soldiers” is sometimes the result of shoddy, or intentionally self-serving, translations by company staff. “There were people who maybe spoke the [English] language, but it was broken, that could not read it or write it … and they were hired. … Nobody was given a test.” And, the employee says, after unskilled people were hired, they weren’t appropriately trained or supervised.

Soldiers in Iraq also describe their direct experiences with KBR. One speaks of training KBR staff to fix radios just so they could take over his own job and leave him to “sit up on guard duty to wait around.” Another criticizes KBR for systematically allowing long chow lines, where troops are sitting ducks for insurgents, instead of providing food around the clock: “They get paid by how many soldiers they feed, not by how many soldiers they save.” A former water purification specialist for KBR, lambastes the company for selling the troops “extremely contaminated” water. Through tears, he warns, “a lot of soldiers over there … might come home without a bullet wound, but … with pathogens in their blood because of Halliburton.” Despite this scandalous service, the Executive Excess report found that Halliburton’s CEO pocketed $26.6 million in 2005.

Much of Iraq For Sale is essentially anecdotal evidence about the perils of privatization. But anecdotes are all we have; our government isn’t keeping hard data. The General Accountability Office has reported that “none of the principal agencies responsible for [Iraq’s] reconstruction had complete data on costs associated with using private security providers” and that “inadequate performance data and measures make it difficult to determine the overall progress and impact of U.S. reconstruction efforts.”

The Iraq occupation is simply the latest failure of Bush Era privatization. The starkest example is FEMA. In April 2001, the White House announced its goal of privatizing much of FEMA’s work soon after Bush’s first inauguration. In June 2004, the agency privatized its hurricane disaster plan for New Orleans, contracting the work to Innovation Emergency Management, a Baton Rouge, La.-based firm. We all know how that turned out.

The painfully protracted rebuilding of the Gulf Coast is due to privatization as well. An August report from CorpWatch found that several of the “disaster profiteers” botching the job in Iraq, including Bechtel and Halliburton, are doing the same at home. On ABC’s August 27 “This Week,” Sen. Mary Landrieu (D-La.) estimated that “30 to 40 percent” of the money going to contractors “never reached anybody, because it went to the contractors for profits.”

In the same vein, Republicans have also taken baby steps to privatize Medicare. The new prescription drug plan subsidizes private companies with billions of taxpayer dollars to provide the insurance. Yet, according to the Center for Economic and Policy Research, that money could have been more efficiently used to offer seniors more complete coverage.

To be fair, the Iraq mess is not primarily the fault of privatization. Imposing “regime change” and permanent military bases at gunpoint in order to aggressively exert dominance over a faraway region was our government’s bright idea. But the testimony in Iraq For Sale shows that partially privatizing the endeavor hardly helped the White House achieve its unilateralist goals.

One might argue that the lone positive development of the privatization debacle is that it has put the brakes on the neoconservative agenda. Iraq has been so difficult to stabilize, it appears to have delayed plans to push on into Iran. But even that positive comes with a big negative: the sullying of democracy.

Even if you believe (as I do) that the Bush Administration is wholly insincere about promoting democracy, that’s how the war is being sold abroad. And the privatized occupation of Iraq has been the absolute worst way to sell it. As one former contractor sums it up at the end of the film, “How’re you going to win the hearts and minds of these people, if they see you cheating your own people, if all this stuff is just for the money?”

With “democracy” now associated with corruption, torture and violence, any future liberal American president attempting to implement a truly pro-democracy foreign policy may have the extra burden trying to convince an increasingly skeptical, beaten-down Arab-Muslim population that real democracy can bring freedom, prosperity and stability.

And yet, despite the relatively poor summer for war profiteers, don’t expect things to change very much.

Bechtel may have lost a $50 million contract, but it still has nearly $3 billion of contracts for work in Iraq to keep itself busy. Few litigators are following the legal precedent set to prosecute contractors–as CNN reported in June, not one private military contractor in Iraq has been charged with a crime, not even one of the CACI interrogators at Abu Ghraib. According to the Washington Post, those found to be “shooting without cause” in Iraq are generally just “relieved of their duties,” instead of prosecuted.

The little victories against privatizing warfare are valuable. But until the American public calls for a change in philosophy–on privatization and on warfare–by replacing our leadership at the top, the corporatized Iraq occupation will continue to waste money and endanger the lives of both Americans and Iraqis.

Bill Scher is the Executive Editor of LiberalOasis.com and the author of Wait! Don't Move To Canada!