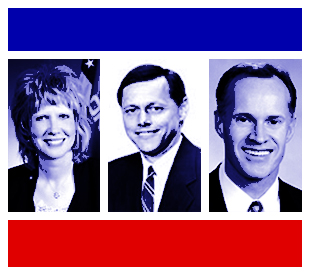 Nancy Riley, Barney Giese and Rodney Tom (from left to right) have all switched parties for the upcoming election.

A trend of local, below-the-radar party-switches is undercutting Republicans as they face the sternest challenge in a decade to one-party control of Congress and several state legislatures. Such party-switching by elected officials often indicates that the label they are shedding has lost appeal and foreshadows poor performance at the polls.

Some recent switchers are exiting GOP ranks with a bang. Distorted priorities, the federal deficit and the Iraq war are common themes in their announcements. And in a direct swipe at the far-right ideology that has become a governing credo in the Bush years, they cite intolerance in the party as the chief reason for leaving.

“The moderate Republican has been pushed aside for the extreme right wing,” Oklahoma state Senator Nancy Riley told the Associated Press in August, when she became a Democrat. Riley represents a district in suburban Tulsa and has served as minority whip in a chamber that her former party was looking to take over in the fall election. She announced her defection after years of what she described as “abhorrent” treatment by Republican leaders who suffer a “lack of compassion for people.”

In central South Carolina, county prosecutor Barney Giese also switched parties. The law-enforcement pro is the son of Warren Giese, a longtime GOP state senator and revered football coach. His announcement upset Republican leaders, struggling to maintain one-party control in a state that Democrats added to their roster of early primary battlegrounds for the 2008 nomination.

“My relationship with some of the leaders of the Republican Party is damaged,” Giese told The State, a Columbia newspaper. “No one gets elected without bipartisan support. … My conflict with them started with me being independent.”

On the other coast, Rodney Tom, a state representative in Washington, didn’t mince words when he left the GOP this spring. “I realized that the far right has complete control of the party,” he told the Seattle Times in announcing his switch.

Now running for state Senate as a Democrat, he represents a district of suburbs that was once lopsidedly Republican. But Tom says voters there generally back abortion rights, nondiscrimination for gay people, balanced budgets and investment in state infrastructure, such as transportation projects. That has soured them on today’s conservatives. “For me to be effective for my constituents,” he added, “I need to be a Democrat.”

Tom’s switch underscores a shift in allegiances away from the GOP among well-educated, upper-middle class voters based in part on the strident antigay and antiabortion stands of Republicans.

Begun in the Clinton years, this erosion of the conservative base has motivated some right-wing strategists to peddle the stances all the more ferociously in hopes of finding and winning over new converts from other demographic groups. It may pay short-term dividends. Bush strategist Karl Rove claims to have identified and successfully solicited votes from as many as 4 million new GOP voters in 2004.

Yet the stigma of pandering to intolerance can sear a negative after-image into the minds of other voters. That effect and friction from dealing with party leaders driven by rigid beliefs are two factors consistently flagged by the party switchers. Showing up as much in red states as in blue, the pattern cannot be dismissed as a regional fluke.

The shift throws a wrench in the Republican machine as it rumbles across a troubled political landscape. The results of special elections for state legislature in the past year have showcased Democratic voting strength, even in areas the GOP has long dominated (see “GOP Trashed in Special Elections,” April 2006). Now another gauge indicates Republican political power at risk.

Twelve years ago, GOP leaders trumpeted a host of Democratic office-holders who had jumped ship as a grassroots rejection of Bill Clinton and his party. They went on to post huge gains in the ‘94 mid-term elections. Now, as Nov. 7 nears, a similar dynamic of popular disaffection with Republicans is taking shape.