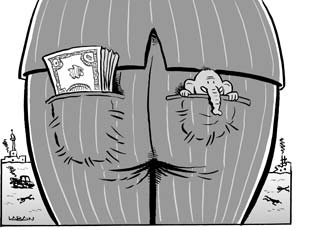 Do partisanship and cronyism trump congressional oversight and corporate accountability?

To learn more about the damage done by U.S. military contractors in Iraq, join In These Times for a screening of Robert Greenwald's newest documentary, Iraq For Sale at 7 p.m., Tuesday, Oct. 17th. In Iraq for Sale, Greenwald, director of Wal-Mart: The High Cost of Low Price, unveils how the lives of soldiers, truck drivers, widows and children have been changed as a result of corporate greed.

This event is free, but donations are encouraged.

For more information about this event, e-mail Erin@inthesetimes.com or visit the Iraq for Sale Web site.

Feces in the soldiers’ water. Blood on the mess hall floor. Expired and substandard food. $85,000 trucks with flat tires abandoned in the desert. Embroidered towels for twice the cost. More than $1 billion in “questionable charges.”

These are just a few of the allegations levied against Halliburton, and its subsidiary Kellogg Brown and Root (KBR), by former employees, soldiers and their families as well as Pentagon and congressional investigators. Since the beginning of the war in Iraq, Halliburton has been working for the Pentagon under the Logistics Civil Augmentation Program (LOGCAP)–a multi-billion dollar agreement that guarantees the contractor receives a fixed profit based on the quote the company gives for tasks like food service, provisioning and outfitting of U.S. soldiers. Last year alone, Halliburton brought in $5.4 billion for its work in Iraq.

In July, the Army announced it was discontinuing the controversial contract and will re-open bidding on a new logistics contract to be split between four companies, one of which will perform oversight functions. Despite its track record, Halliburton is free to make a bid.

In addition to its lucrative military logistical work, Halliburton recently checked off their $2.41 billion “Restore Iraqi Oil” contract as complete–even though gas is $3.20 per gallon in Baghdad and the oil infrastructure remains in shambles. Among its other contracts, Halliburton is also working on a $30 million project to build more prisons at Guantánamo.

With billions of dollars at stake and the war prospectively stretching into the next decade, why isn’t Congress banging the gavel on oversight and corporate accountability? And why have congressional Democrats been forced to resort to guerilla tactics to wring information from Halliburton and other companies?

Sen. Byron Dorgan, the North Dakota chairman of the Senate Democratic Policy Committee, is tirelessly pushing for a Truman-style commission on war profiteering, but his amendments have been repeatedly defeated in party line votes–mostly recently in June with a 52-44 vote. As Dorgan spokesman Barry Piatt explains, “There is one-party control. Republicans hold the White House and the House and Senate and they are not interested in embarrassing each other.” But, Piatt insists, “We aren’t either. We’re interested in getting the troops what they need, and in safeguarding the taxpayers’ money.”

In the service of this project, the Senate Democratic Policy Committee has been churning out reports like “The Failed Republican Strategy in Iraq Has Made Us Less Safe at Home.” In the House, Rep. Henry Waxman (D-Calif.) is running a watchdog cottage industry out of his office–enlisting lawyers, investigators and technical experts to issue reams of reports like “Dollars, Not Sense: Government Contracting Under the Bush Administration.” In both houses, Democrats are holding hearings with whistleblowers, former employees and analysts. These events generate news attention and outrage, but–thus far–not legislation or change.

Republicans sneer at these outsider efforts. “It gets to a point where it’s more shtick than substance,” says Kevin Madden, spokesman for House Majority Leader John Boehner (R-Ohio). Rep. Tom David (R-Va.), chair of the Government Reform Committee, defends Republican inaction by declaring, “We aren’t going after the mini scandal du jour trying to embarrass the administration at a hearing that’s going nowhere.”

Yet, during the Clinton years, Republicans seemed to love “nowhere” investigations. Did President Clinton sell Arlington cemetery plots to his big donors? Did he misuse the White House Christmas card list to hunt for potential contributors? The answers to these and many other questions were sought in aggressive and voluminous investigations by the Republican-controlled Congress. In all, between 1997 and 2002, the Government Reform Committee issued 1,052 subpoenas against the Clinton administration and the DNC and only 11 related to Republican abuse.

In contrast, during the 108th Congress, the Government Reform Committee grudgingly held four hearings on Iraq reconstruction contracting. Their final report dismissed critical witnesses as “so-called whistle blowers” and attributed multi-million dollar bungles to the “fog of war.” In Sen. Dorgan’s view, the hearings “were called in order to defend Halliburton, which is a pretty pathetic way to do investigative oversight.”

Frank Silbey, a former investigator for the Senate Labor Committee under both the Republicans and the Democrats, says he’s never seen it so bad. “Congress has enormous power and it does nothing.”

In March, the House had a chance to do something when Waxman attached Amendment 746 to the $70 billion plus emergency war and reconstruction package. The amendment prohibited future contracts with companies that had overcharged the government by $100 million or more. Even though Halliburton is the only company with such a dubious distinction, only 11 Republicans voted for the measure. House Armed Services Chair Duncan Hunter went so far as to praise the company for its “good, hardworking people” and to claim that he and other House leaders did not know why Waxman wanted hearings on Halliburton’s track record in Iraq.

Cozying up to Congress

Why doesn’t Congress do more? Part of the answer lies in the political weight Halliburton throws around Washington, doling out hundreds of thousands in campaign contributions and accumulating more than $1 million in lobbying bills in the past few years. Since 2000, the company has contributed more than $645,000 to congressional campaign coffers, with more than 90 percent going to Republicans. Their lobbying expenditures are also sky-high. After spending more than $1 million on the services of firms like Baker Botts LLP (as in Bush Senior’s Secretary of State James Baker III) and Vinson & Elkins in 2004, Halliburton spent another $372,000 in 2005.

Vice President Dick Cheney’s relationship to the company is widely known: Despite almost no corporate experience, Cheney was hired to head the oil services company in 1995, just a few years after completing his tenure as Secretary of Defense under President George H.W. Bush. When Cheney took the helm, the company was 73rd on the list of the Pentagon’s top contractors, bringing in about $1 billion in defense contracts a year. In part because of the contacts Cheney brought to the company, Halliburton now stands at number 6, with $5.8 billion in Pentagon contracts in 2005.

Cheney is a great friend to have, but it doesn’t hurt that the company has other close ties. Richard “Plame-gate” Armitage did freelance consulting work for Halliburton before assuming the number two position at the State Department. In 2005, KBR hired Joe Allbaugh, an aide to George W. Bush when he was governor of Texas and former director of the Federal Emergency Management Agency, as a consultant. For good measure, they hired Allbaugh’s wife Diane too.

Nonetheless, the idea of a Truman-style investigation into war profiteering is catching on and gaining traction.

MoveOn, the progressive lobbying and education organization, has made political hay of Republican advocacy for corporations with a series of “Caught Red Handed” advertisements. One television ad highlights Halliburton’s donations to Rep. Thelma Drake (R-Va.) alongside information about her vote against Waxman’s March amendment that would have barred the company from further Pentagon contracts.

Congress’ role as corporate watchdog might have a better chance in the 110th Congress with Democratic candidates like Tammy Duckworth and Jim Webb campaigning on a platform of corporate accountability. Duckworth, a disabled Iraq war veteran, wants to fill the House seat vacated by the retiring Rep. Henry Hyde (R-Ill.). The Black Hawk helicopter pilot lost both her legs in a November 2004 grenade attack. As a soldier in Iraq, Duckworth saw “numerous examples of questionable spending on military operations and reconstruction projects at the same time that our troops were facing shortages in the field.” Cooks in her National Guard unit were replaced by KBR employees paid $10 a day while the company charged the government $22 a meal.

Along with Jim Webb, a former Secretary of the Navy running for the Virginia Senate seat against the incumbent Republican, George “Macaca” Allen, Duckworth has pledged to “introduce legislation to establish a special committee to investigate the billions of dollars being spent on military operations in Iraq and Afghanistan” if elected.

If Congress can’t put aside partisanship, cronyism and greed to curb the most flagrant, egregious and criminal war profiting behavior from companies like Halliburton, it will have a very hard time cracking down on smaller but no less troubling companies like Blackwater or DynCorp. Maybe it is time for a people’s Truman Commission–start with the companies, and then look at Congress.