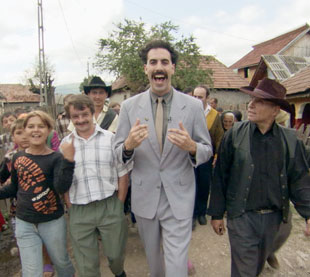 Borat's countrymen wish him well on his trip to glean "cultural learnings" of America.

Introductions at a new school can be awkward. Anxious to find friends, students ask nervous and often contrived questions about each other’s families, backgrounds and interests. But when Kazakhstan native Roman Nurpeissov arrived at the University of Michigan in September to start law school, nearly everyone he met was dying to ask him the same question: “Oh man, have you seen Borat?”

“I had heard about him, but never cared to go online and check it out,” says Nurpeissov. “But after people kept asking, I went to YouTube.com and had to watch clips.”

Nurpeissov’s experience reflects the staggering popularity of comedian Sacha Baron Cohen’s character Borat Sagdiyev, whose movie Borat: Cultural Learnings of American for Make Benefit Glorious Nation of Kazakhstan opens nationwide on November 3. Borat, a citizen of the Central Asian country of Kazakhstan, works as a foreign correspondent for Kazakh television. Despite his clumsiness and limited understanding of English, the self-proclaimed “sixth best journalist in all Kazakhstan” seeks to grasp American culture through interviews and use that knowledge to improve life in his homeland.

But as Borat tries to make sense of American customs, he unveils some intense prejudices. Borat, who first surfaced on Baron Cohen’s popular television program “Da Ali G Show,” is surprised to learn that American women can vote and claims that it is harder to marry in the United States because “you can’t go to her father’s house and swap her for 15 gallons of insecticide.” He is also virulently racist and often asks if gypsies or “chocolate faces” are granted entrance to selective social functions. Borat is best known, however, for his anti-Semitism, which creeps up in virtually every interview. During a segment at a karate class, Borat forces the instructor to teach him tactics he can employ to ward off the dangerous “Jew Claw.”

Although amusing for his slapstick antics, Baron Cohen’s blundering brainchild has a more profound aim. Borat examines how the anti-Semitism, racism, sexism and homophobia of Westerners are perpetuated, often through conformity rather than hatred. It makes sense Baron Cohen, who was raised by a Jewish mother of Iranian descent and a British father in London, would be sensitive to issues of discrimination. As a youth, Baron Cohen joined Habonim Dror, a socialist, Zionist youth organization whose aim is to “upbuild the State of Israel as a progressive, egalitarian, cooperative society, at peace with its neighbors.” He later attended Cambridge University, where he studied history and focused on Jewish and black relations during the U.S. Civil Rights Movement.

As conceived by Baron Cohen, Borat’s behavior pointedly calls attention to the cruel realities of American’s divisive social relations and ignorance of other cultures. Recognizing that most Americans have no knowledge of Kazakhstan, Baron Cohen constructs a virtually original culture, fresh with an unintelligible language and perverse customs like “dog-shooting.” Next, he develops the seemingly innocent yet painfully intolerant journalist, a person who Americans are either too ignorant or polite to challenge. Finally, he uses deeply offensive rhetoric in interviews with folks who are not in on the joke, usually resulting in either unnerving agreement or equally outlandish retorts. During one sketch, Borat partakes in a wine tasting with two white gentlemen from Mississippi. When a black wine steward refills their drinks, Borat asks “he is your slave?” “No, he’s not a slave at all,” replies the white man. “We don’t have slaves down here any more … which is a good thing for them.” “But not so much for you,” Borat quips. “Right, right,” utters the Mississippian.

What is so impressive about the satire is Baron Cohen’s intense commitment to the character. In the lead-up to the film’s release, Baron Cohen has refused to give personal interviews, instead speaking only in Borat’s iconic voice. This devotion pays off during his performances. Even under hostile circumstances, Baron Cohen knows exactly what Borat would say and when he would say it. “He doesn’t break character ever,” says Anthony Kaufman, a freelance journalist who viewed a sneak-preview of the film. “People buy him and they buy everything that comes with him.”

Despite its success, not everyone is enthusiastic about Baron Cohen’s provocative satire. Detractors think that Borat offends more than he sparks dialogue.

In 2004, Borat took the stage at a Tucson, Ariz. country-western bar. Festooned with a cowboy hat and spurs, he sang a ditty entitled “Throw the Jews Down the Well” to a frighteningly enthusiastic audience, who clapped and sang along. A week later, the Anti-Defamation League sent a letter to Baron Cohen, claiming that they were “concerned that the irony may have been lost on some of your audience–or worse, that some of your viewers may have simply accepted Borat’s statements about Jews at face value.”

A year later, Borat was invited to host the MTV Europe Music Awards in Lisbon. Baron Cohen took advantage of the intense media exposure by calling singer Shakira “a whore,” commenting on his wife’s inability to travel outside of Kazakhstan because of her gender and bringing a gift-bag full of Romanian birds to a pre-show press conference, seemingly unaware that they posed a threat during the height of the Avian Flu scare.

This high-profile appearance elicited a response from Kazakhstan’s government, which was furious at Borat’s misrepresentation of their country. After a conspiracy-laden tirade that questioned whether “Mr. Cohen is serving someone’s political order designed to present Kazakhstan and its people in a derogatory way,” President Nursultan Nazarbayev shut down Borat’s Web site, whose domain-name looked Kazakh-based but was actually hosted outside of Kazakhstan.

In recent weeks, the government made their second major public relations push to coincide with Nazarbayev’s September 29 meeting with President George W. Bush and the growing anticipation surrounding Baron Cohen’s movie. This time, they took out large ad spreads in various international publications like the New York Times and the International Herald Tribune and made “educational” commercials that aired on American network and cable television.

Because Baron Cohen chose Borat’s homeland arbitrarily, the Kazakh government sits between a rock and a hard place. “On one hand, [the government] could ignore Borat and not take him seriously,” says Nurpeissov. “On the other hand, there are people in Kazakhstan who don’t like what [Borat] does at all, so the government feels obliged to respond.”

While Baron Cohen originally set out to satirize bigotry, the comedian unintentionally ended up highlighting the emptiness of the Bush administration’s foreign policy rhetoric. Kazakhstan is an important ally for the United States: After 9/11, it offered the U.S. Air Force landing rights for operations in nearby Afghanistan and have since opened up the country’s oil reserves, which are expected to pump 3.5 million barrels of oil a day over the next 10 years to various American oil companies. After their private meeting, Bush wasted no time in lauding the achievements of Nazarbayev, thanking him for his “commitment to institutions that will enable liberty to flourish.”

Yet Kazakhstan maintains a pitiful record of democracy and human rights. According to the U.S. State Department, the Kazakh government restricts women’s rights, workers’ rights, freedom of the press and freedom of assembly.

“Nazarbayev is an enlightened autocrat,” says Sean Roberts, Central Asian Affairs Fellow at Georgetown University. “Despite some progressive economic policies … the president controls political expression and competition with a tight fist.” Indeed, it wasn’t only international observers who raised their eyebrows when Nazarbayev was re-elected in 2005 with 91 percent of the vote. Of course, Nazarbayev’s suspiciously high plurality may have resulted from the mid-campaign “suicide” by his only viable challenger, who somehow managed to shoot himself in both the chest and head.

How can Bush disregard the major tenets of democracy when discussing the “free nation” of Kazakhstan? Simply put, the squashed Kazakh democracy is in the administration’s best political interest. Yet with no engagement around these issues, the Bush administration appears insincere in its calls for “democratization.”

“The rhetoric is that you’re either with us or against us, you have democracy or you must change,” says Roberts. “[Countries] think the administration is talking out of both sides of their mouth.”

Borat, unlike Bush, is quick to dispel any rumors of Kazakh human rights improvements. Certain that the recent advertising campaign was the work of neighbor Uzbekistan, Borat countered that “if there is one more item of Uzbek propaganda claiming that we do not drink fermented horse urine, give death penalty for baking bagels or export over 300 tons of human pubis per year, than we will be left with no alternative but to commence bombardment of their cities with our catapults.”

While issues of foreign policy and sensitivity remain in question, the success of the film is almost guaranteed. “In Toronto [at The Toronto Film Festival] when Baron Cohen got there, it was like a rock concert,” says Kaufman. “It has total widespread awareness. … I think it’s going to be really popular.”

Given the effectiveness of the satire, Borat could supply the most scathing and significant “movie film” of the year.