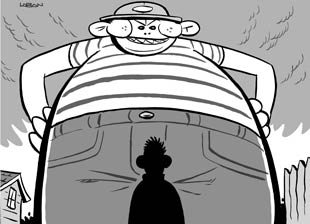 The Power of Mean

Fuller argues that the moral power of Rankism = that everyone experiences being a somebody and a nobody - can overcome the innate force of bullying?

A nine-year-old girl in England feels ugly and wants to kill herself because her schoolmates call her “Blackie.” A legal assistant in Oregon is terrorized by an autocratic boss who screams obscenities in her face and refuses to give her time off for surgery. An 80-year-old man finds himself at the mercy of abusive nurses at a convalescent home. A teenager is molested by his parish priest.

Each of these are examples of what author Robert Fuller calls “rankism,” which he defines as “discrimination or exploitation based on rank.” All around us, he says, a powerful “somebody” is bullying a “nobody.”

In his latest book, All Rise: Somebodies, Nobodies, and the Politics of Dignity, Fuller explores how rankism offers a powerful opportunity to organize around social justice and equality. Given “the diminishing returns of identity-based politics,” Fuller argues that the concept of rankism is more inclusive and appealing:

Someone can hold a high rank in one setting (for example, at home) and simultaneously be low on the totem pole in another (at work). Likewise we can feel powerful at one time and powerless at another, as when we … experience the loss of a job, a partner, or our health. As a result, most of us have been victims and perpetrators of discrimination based on rank.

Such dynamics offer the potential for identification that can be transformed, he writes, into a movement to create a dignitarian society where “the dignity of all people is honored and protected.”

On its face, Fuller’s thesis is hard to fault. We all know something about being victimized simply because we were on the wrong end of a power relationship. And isn’t giving our common experience a name the first step toward raising consciousness of its insidious and destructive effects?

Yet Fuller’s concept of rankism–which invokes our capacity for empathy as individual human beings–fails to address the darker side of our relationship to authority. Our everyday responses to abuses of power within the hierarchies that structure our lives, from the schoolyard to the workplace, are far more complex and muddied than Fuller acknowledges.

Take, for example, the success of reality television, premised on the recognition that we nobodies enjoy seeing our fellow nobodies humiliated by a somebody. The popularity of Simon Cowell on “American Idol” or Donald Trump on “The Apprentice” reveals our willingness to accept, even relish, the cruelty of authority figures when it is targeted at others. We instinctively condone mean, bullying behavior as part and parcel of the exercise of legitimate power.

Learning to respect and accede to the power of mean starts early in life. It begins on the playground, where children learn quickly to use violence and fear to enhance their social status. In the June 2005 issue of Scientific American Mind, German researcher Mechthild Shafer described the typical elementary school bully: “Bullies are usually very dominant children who have learned early on that they can become the leader of a group by being aggressive. Their modus operandi is to humiliate a student who is physically or psychologically susceptible to rise to the top of the social order.”

More depressing–and telling–is Schafer’s finding that children become more supportive of cruelty over time. After six years, she writes, “In contrast to the bullies’ relative lower standing during elementary school, they had actually become very popular with their classmates.” Meanwhile, the victims “got few sympathy points. … Their peers acted as if they were not there or responded with outright rejection and whispered behind their backs. The bullies escalated this game, insulting and making fun of them. Many of the target children came to identify with the underdog role.” The longer this went on, she notes, the more isolated the victims became.

The trend is no different in Canada, where psychologist Debra Pepler found 60 percent of the so-called “neutral” students were friends of the bullies, and half of the observers of bullying behaviors eventually became active participants and supporters. And UCLA psychologist Jaana Juvonen discovered that bullies were consistently among the most liked and respected kids among 2,000 sixth-graders in the Los Angeles area.

Juvonen’s research should hardly surprise liberals, for whom politics has come to resemble a bad high school flashback, especially under the aegis of the Bush administration. Recent election years simply replayed the locker-room dynamic: Nasty Republican operatives beat up on craven Democratic “pussies” for the benefit of an appreciative “objective” media, and an acquiescent American public, that seems more likely to punish the GOP for incompetence than its dirty tricks.

Kids will be kids, but as it turns out, so will adults–both in politics and in the workplace. Bullying is as common on the job as in the schoolyard. According to Bennett Tepper, a professor of managerial sciences at Georgia State University, 50 percent of workers say they’ve had an abusive boss at some point in their working career. Women may be more likely to be targets, but they are just as likely to be bullies.

Contrary to Fuller’s claim that rankism is bad for the corporate bottom line, the research on its effects on employees shows that it may not hurt productivity. Like schoolchildren, workers are more likely to appease a bully than to confront him. “Many abused subordinates continue to perform at high levels,” Tepper writes in an e-mail interview. “They do so because they believe that they have no choice (i.e., they have little mobility and believe that low performance will elicit further abuse or, possibly, termination).”

High performance may also be part of “an impression management strategy–trying to create a favorable impression in the mind of the abuser, thinking that doing so might deflect the supervisor’s abuse toward someone else (another coworker perhaps),” says Tepper. And when faced with a flagrant abuse of power, a combination of fear, ambition and even schadenfreude makes other employees more likely to blame the victim than come to his aid.

Worse, a bullying boss is likely to make her subordinates just as mean. Experiments conducted by Leigh Thompson, an organizational psychologist at Northwestern University, and Cameron Anderson, a business professor at the University of California, Berkeley, found that a middle-level manager is likely to reproduce the behavior of his punitive boss in order to please her, irrespective of his own temperament. “If the person in charge is high energy, aggressive, mean, the classic bully type,” Thompson told the New York Times, “then over time, that’s the way the No. 2 person begins to act.”

Cruelty, then, is a communicable disease. Moreover, it requires the participation of the entire community, since the exercise of power–legitimate or otherwise–requires social recognition. While discussions of bullying tend to focus on the perpetrator and the victim, Juvonen notes that bullying requires the presence of an appreciative audience. The primary reward of bullying in schools is not so much the terror of the victim, but the opportunity for the bully to assert his higher social status in the larger community.

“Bullies would not bully someone without an audience,” Juvonen says. “Even when these incidents of physical intimidation take place in the privacy of a bathroom, it’s to ensure privacy from adults. But they know that rumors get around quickly about what so-and-so did to so-and-so, etc. So there is always an audience, whether visible or invisible.”

All Rise simply sidesteps the psychosocial roots of rankism, resorting instead to social history. Fuller envisions a dignitarian movement that follows the arc of civil rights movements: People become conscious of injustice, recognize its “negative consequences” and then organize themselves into a movement for change.

But, as he himself concedes, “When it comes to familiar varieties of discrimination, the victims and the victimizers are, for the most part, distinguishable and separate groups: black and white; female and male, gay and straight, and so on. The same thing that makes it easy to identify potential victims of these familiar isms … facilitates the formation of a solidarity group to confront the perpetrators.”

However, he fails to recognize the enormous challenge this lack of identification poses for a dignitarian movement. While, a number of, say, African Americans may internalize racism or participate in a racist culture, their role can hardly be compared to the so-called “neutral” nobodies who actively enable the abuse of power within an organization or community.

Dividing the world into somebodies and nobodies does little to capture the complex dynamics of power within social groups. Unlike racism or homophobia, the underlying causes of rankism are rooted in the ancient hardwiring of our brain that associates aggression with status. It is why so many of us instinctively kowtow to our bullying boss, partner, peer, or even our president. In this, we are no different than our fellow primates.

Unlike chimps or gorillas, however, we do possess the ability to overcome our most primal impulse. “Is it natural?,” Juvonen asks. “Yes. Is it inevitable? Absolutely not.” Moral principles can indeed override the basic instinct for cruelty, but we first have to be willing to acknowledge the power of mean.