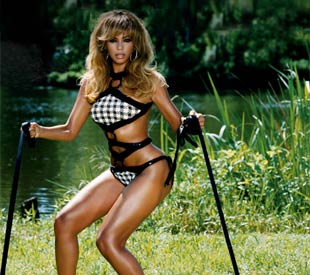 Beyonce Knowles’s transformation as a pop star exemplifies the quarterlife identity crisis felt by many twenty-somethings.

She screams at the top of her lungs. A look of bewilderment dances across her honey-colored face. She whips her blond-streaked mane in a ferocious rage.

R&B singer Beyoncé is in the foul throes of a Quarterlife Crisis. That’s the angst twenty-somethings feel about life and the future. The pressures of careers, finances and relationships give its victims whiplash as they ponder choices. In Quarterlife Crisis: The Unique Challenges of Life in Your Twenties, Alexandra Robbins and Abby Wilner write, “While at its heart the quarterlife crisis is an identity crisis, it causes twenty-somethings’ conflicting emotions to show up in different ways. Sometimes they reach a state of panic sparked by a feeling of loss and uncertainty.”

The beautiful and talented Beyoncé turned 25 this fall, and she’s having her crisis in the spotlight. Sony BMG released her second solo album, B’Day, on her quarterlife birthday. And she stars in the movie Dreamgirls, a remake of the Broadway musical about a three-member girl group, scheduled for release in December. Performing in the public eye since she was a teen, Beyoncé is trying to shed the teeny-bopper image like a skunk-funked fur coat. Let’s hope that journey of self-discovery ends soon.

The singer’s coming-of-age has come complete with a personality split. The October issue of Blender describes Beyoncé’s relationship to her onstage alter-ego, “Sasha:”

Through pain, disappointment, tears and a lawsuit or two, she says, the good girl has grown a lot savvier. Sasha, who had first proved useful in helping Beyoncé cure her shyness, has become an indispensable shield. “Sometimes when Beyoncé slips through, I’m like, ‘Hold up, come back!’” she says. “Sasha protects me. It’s a good way to keep sane.”

In B’Day, she sounds like a young woman going off the deep end. Two music videos off this album show her strutting her sexuality. “Déjà Vu” displays Beyoncé draped over her equally famous rapper boyfriend Jay-Z, 12 years her senior. It looks as if any minute now she’ll give him fellatio. As Beyoncé molests the gum in her mouth, at one point she stops looking at the camera and becomes a prop. These moments are uncomfortable. For the second single, “Ring the Alarm,” she copies the infamous scene from Basic Instinct. Dressed in white like Sharon Stone and posing in a chair before a group of interrogating men, Beyoncé crosses her legs in between angry choruses about being damned if she sees another chick on her beau’s arm. There’s no overexposure of skin–but there’s no satire either.

Before going solo, Beyoncé was lead singer of Destiny’s Child, the girl group that her father managed. The trio hit pay dirt in the late ’90s, but the group was really designed to nurture the blossoming career of its front-woman. Beyoncé has never marketed herself as a schoolmarm, but the singer is getting racier, edgier–and not in a sophisticated way. Her super sexualization started last year with songs about catering to men and looking for a thug-like “soldier” boyfriend.

This virgin-to-Madonna routine has played out with other teen-to-woman pop stars: Christina Aguilera, Jessica Simpson and Britney Spears. It’s sad to see Beyoncé giving in to these hypersexual–and hypercommercial–images. Gone is the clever champion for “independent women” or “survivors,” that some of her earlier songs portrayed, replaced with the submissive female selling sex.

Unlike her peers, Beyoncé can actually sing. That talent saddles her with the burden of being a role model. Fans have complained about their beloved Beyoncé’s transformation. An online petition pleads for the record company to have Beyoncé re-shoot the “Déjà Vu” video. Among their requests are less gyrating, more choreography and fewer sexual scenes between her and Jay-Z. As one post puts it, “The overall feel of the video leaves a sense of much to be desired.”

Caricatures of black female sexuality have long been on display–the sassy black girl, the waddling mammy and now the barely clad, hip-hop video girl. These clichés interlock with the hypermasculine depictions of black men. “Many people have difficulty appreciating black women as we are because of eagerness to impose an identity upon us based on any number of negative stereotypes,” scholar bell hooks noted in Ain’t I a Woman: Black Women and Feminism.

Twenty years ago Madonna shook up feminism and the pop music world with her overt sexuality. She created and broke a mold simultaneously. Madonna has constantly reinvented herself, but from the beginning she never shied from embracing her sexual power, an example that has trickled down to throngs of young female singers. Sexual power can be powerful, but with Beyoncé and these other young singers, there is no mystery. Everything is displayed like a buffet, leaving no room for future growth or artistic evolution.

The industry is crowded with wannabes, has-beens and ingénues longing for their MTV rotation. And that competition has forced Beyoncé to work to stand out. Of course, Beyoncé has the right to evolve as an artist and push the envelope. Still, the pressure is evident–hence the crisis. All she has to do is look at other black singers who never made the crossover because they didn’t flaunt their sexuality. If they had, the Jill Scotts, Lizz Wrights and Jean Graes–all successful and lauded in their own right– might be elevated to a different standard, or at least a different chart position.

Beyoncé is often compared to (or accused of mimicking) Diana Ross and Tina Turner, with her Supremes-inspired role in Dreamgirls and her leggy dance performances. But if she wants to bask in the same career longevity, she should remember life is a marathon, not a strip tease.