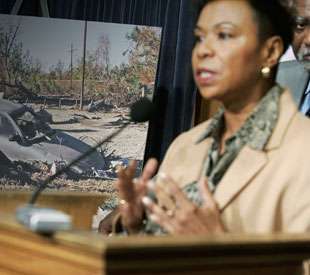 "We have a lot of work to do," says Progressive Caucus Co-Chair Rep. Barbara Lee (D-Calif), shown here at a Capitol Hill news conference on the Federal government's response to Hurricane Katrina in February. "Hurricane Katrina was a stark reminder of the failure of our government to address the challenges of inequality and poverty that still confront our nation."

This election was no victory for centrists

Don’t buy all the crap coming from GOP talking-point memos or the blather from mainstream pundits. The midterm elections do not signal a move to the center. Yes, a few conservative Democrats were elected, but the big gainers were progressives. In particular, the Congressional Progressive Caucus is on the rise.

No longer will Rep. F. James Sensenbrenner (R-Wis.) be able to grab the gavel and run, as he did at a hearing last year when faced with pointed questions from Congressional Democrats about the PATRIOT Act, Guantanamo and the “war on terror.” During a hearing, Sensenbrenner, the chair of the House Judiciary Committee, used his standing to abruptly declare the committee’s public hearing on the PATRIOT Act over. He cut off the microphones of the Democratic half of the panel and smugly shuffled out of the room, thereby avoiding any more frivolous questions about “civil rights.”

Democrats as a whole will benefit from controlling the House of Representatives, but yesterday’s victory bodes especially well for members of the Congressional Progressive Caucus (CPC), a coalition of 63 left-leaning Democrats that includes Speaker of the House Nancy Pelosi (D-Calif.). Indeed the CPC is poised to increase its ranks. In an unprecedented move this fall, CPC members–coming together under the newly formed Progressive Majority Project–pooled their money, time and staff to lend support to progressives running in 12 House races. Eight of those CPC-backed candidates won, which makes all this talk about conservative Democrats in the ascendancy a bunch of bunk. (In addition, two CPC members, Rep. Sherrod Brown (D-Ohio) and Rep. Bernie Sanders (I-Vt.), have moved on to the Senate.)

Though the CPC represents about a third of House Democrats, the caucus members hold ranking minority positions on half of the House’s 20 standing committees, including Conyers on the Judiciary Committee, Rep. George Miller (D-Calif.) on the Education and the Workforce Committee, and Rep. Henry Waxman (D-Calif.) on the Government Reform Committee. As chairmen of those committees, CPC members will now be in a position to both promote progressive legislation and investigate administration wrongdoing. The assumption of committee chairmanships is one way the CPC is working to transform the group from the House’s largest caucus into its most powerful.

“It is important to recognize that this was not just a vote against George Bush and the Republican Congress, it was a vote for a Democratic agenda that is rooted in progressive values,” said Progressive Caucus Co-Chair Rep. Barbara Lee (D-Calif.). “In just the first 100 hours, we will be uniting behind Leader Pelosi to move a legislative agenda designed to address real issues that impact Americans.”

To build unity among the growing caucus, the CPC in May of last year hired former AFL-CIO official Bill Goold, its first full-time employee, as a policy coordinator. Five months later, the caucus drafted a new four-point “Progressive Promise,” a kind of Ten Commandments for progressives; the points centered around economic justice, civil rights, global peace and energy independence. A framework of general policy initiatives, such as raising the minimum wage and opposing media consolidation, is included.

The Progressive Promise provides the CPC with a foundation from which to build their legislative efforts. Last year, Lee, the co-chair of the CPC, turned the Promise’s commitment to global peace into HR (House Resolution) 197, which would make it “the policy of the United States not to enter into any base agreement with the Government of Iraq that would lead to a permanent United Sates military presence in Iraq.” The bill, as she wrote in an 2005 In These Times “House Call” column, would force the hand of supporters of the president. “If they don’t support being in Iraq permanently, they should co-sponsor my bill, and put themselves on record. It is that simple.”

And HR 676, introduced by Conyers and Rep. Dennis Kucinich (D-Ohio), has become a rallying point for the CPC, labor unions, nurses and other activists. The proposal, which would establish universal health care, drew co-sponsorship from more than 70 representatives, was endorsed by as many labor unions and was the subject of rallies in dozens of U.S. cities this year.

Both bills now have a chance to get a fuller hearing. And on a wide range of issues, real alternatives can now be put forward. “We must move to address our domestic priorities: creating good jobs, increasing access to healthcare and providing the best possible education for our children,” Pelosi wrote in In These Times, following the 2004 election. “We also must reform the tax code and stop rewarding outsourcing. As a matter of basic fairness, no taxpayer should have to subsidize the outsourcing of his or her own job.”

There is reason to celebrate. Before heading to bed at 5 a.m. today, Chris Bowers of MyDD.com, a blog that has been instrumental in supporting progressive campaigns and politicians, posted the following congratulatory message:

“Wave of new conservative Democrats, my ass. [S]omeone tell me again how the new wave of Democrats is overwhelmingly conservative. … Republicans beaten at the top of their game. Republicans broke all of their fundraising and voter contact records this year. They had better maps than ever before. They had a better opportunity to pass whatever legislation they liked than ever before. And they were still crushed,” wrote Bowers.

“This is no time to start being risk-averse,” Bowers added. “We must continue to pursue the strategies that brought us here: silent revolution, fifty-state strategy, small donor explosion, [and a] progressive movement. We are all in this together.”

Nick Burt is a Chicago-based freelance writer, and Joel Bleifuss is the editor of In These Times