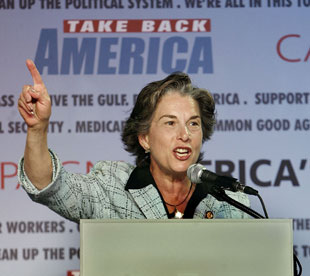 Rep. Jan Schakowsky (D-Ill.) and other Democrats have taken back America. Now what?

Turning Back the Tax Revolt

Isn’t it nice to get some good news? Finally, electoral victories are paving the way for real progressive success. Even better, ballot measure victories have even provided the beginnings of a progressive policy playbook.

At the federal level, narrow victory margins and the continued presence of the Bush administration are likely to stymie progressive reforms. The states, however, are a different story. Democrats now control the “trifecta”–Senate, House, and Governorship–in 15 states. Republicans, in comparison, hold only ten. And in a number of other states, Democratic majorities have Republican governors who campaigned on progressive values.

Even better news comes in the form of the apparent end of the tax revolt: voters rejected a number of so-called “Taxpayers’ Bill of Rights” (TABOR) spending cap measures and tax cuts in states across the country. New York City developer-turned-libertarian financier Howard Rich worked with a handful of friends to try and qualify as many as 35 anti-government ballot initiatives. Only one proved successful. Voters also outright rejected a number of tax cuts, including an estate tax repeal that was rejected by more than 60 percent of Washington state voters.

The end of the tax revolt means an opportunity to fund progressive priorities, provided that revenue-enhancing strategies are thought through carefully in advance. So what policies are we likely to see pushed to the front burner in this new, more progressive era? In addition to more minimum wage and paid sick leave proposals, expect to see these issues jump to the front of the line:

These measures are hardly a full progressive agenda, but combined, they are notable for their diversity and importance, tackling the issues that are on the minds of Americans: getting the economy to treat workers fairly, expanding health care access while reining in costs, and guaranteeing opportunity for the next generation.

Matt Singer, Communications Director for the Progressive States Network, is a writer and activist in Montana.