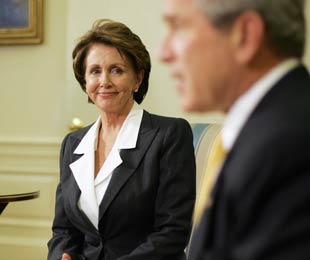 The question is not: Where does Pelosi stand at the opening of this session of Congress? Rather, it is: Where do the people stand?

In Praise of Impeachment

Pelosi may have put it “off the table,” but it’s not her decision anyway

A lot of progressives were perturbed when, immediately after the American people handed the House Democratic Caucus the power to check and balance the Bush presidency, Rep. Nancy Pelosi (D-Calif.) repeated her enthusiasm-dampening pledge that “impeachment is off the table.”

But there is nothing new about a Democratic Speaker of the House shying away from the “I” word, even when the leader knows that a Republican president merits official sanction. The same thing happened after Richard Nixon vanquished George McGovern in the 1972 election.

Grassroots Democrats and a few bold members of Congress began suggesting that issues raised by the Watergate burglary and related matters were serious enough to merit discussion of impeachment. House Speaker Carl Albert, House Majority Leader Tip O’Neill and most of their compatriots in the Democratic Party knew at the time that, despite the president’s protestations, Nixon was indeed a crook–and by extension, that he and his nefarious inner circle had committed acts that gave definition to the deliberately amorphous term “high crimes and misdemeanors.” Yet, they too took impeachment off the table–and kept it off–until the evolution of the scandal and the popular outcry it inspired forced them to put the most powerful tool in the arsenal of the republic back where it belonged.

Surely, Pelosi’s reticence is frustrating to patriotic Americans who know that we have reached the moment when, to borrow a thought from a Constitutional scholar named James Madison: “it may … be found necessary to impeach the President himself.” But history tells us that Pelosi’s pronouncement ought not be taken seriously, as she is, at best, a bit player in what could yet be an epic drama. Pelosi is a politician of the most cautious school. As such, her post-election assertion ought to be taken about as seriously as George Bush’s pre-election declaration that he wanted Secretary of Defense Donald Rumsfeld to remain at the Pentagon until the end of the administration’s second term.

Why should we dismiss the Speaker-to-be’s adamant dismissal of impeachment as mere wordplay? Not because Pelosi is secretly plotting impeachment. Rather, because any meaningful movement to impeach a president–and, in the case of the Bush-Cheney administration, a vice president–does not come from the Speaker of the House. The Speaker is, in fact, often the last to know that the Constitutional moment has arrived.

Impeachment is an organic process, imagined as such by the founders. Its seed is not naturally planted in Washington, nor nurtured there. When an impeachment initiative is little more than a manifestation of inside-the-Beltway partisanship, as was the case with the Clinton impeachment of the late ’90s, its proponents invite an appropriate rebuke from the citizenry. But when proposals for impeachment are grounded in popular concern for the republic in general and the application of the rule of law in particular–as are moves to sanction Bush and Cheney for illegal war making and wiretapping–the process will begin at the grassroots and grow until it cannot be denied by Washington.

Madison, George Mason and the other founders–who so highly valued the tool of impeachment that they mentioned it six times in the Constitution they crafted–did not think of the impeachment and trial of a sitting president as some sort of political coup. They thought of it as a popular response to executive excess, which would be carried out by the representatives of the people–sitting in the House and Senate–with the purpose of ending the abuses, disempowering an out-of-control president and restoring a proper balance of powers.

Thomas Jefferson, who corresponded regularly with Madison regarding impeachment during the period when the Constitution was being drafted, dreaded the prospect that the president would become nothing more than an “elected despot” or “a king for four years.” While the Constitution handed Congress the power to officially check such despotism, Jefferson and his colleagues fully expected the American people to be the champions of the application of the rule of law to an errant executive.

So the question is not: Where does Pelosi stand at the opening of this session of Congress? Rather, it is: Where do the people stand?

Polling tells us that Americans are a good deal more enthusiastic about holding this president to account than are the leaders of what is sometimes euphemistically referred to as an opposition party. A majority of Americans surveyed last fall in a national poll by the respected firm Ipsos Public Affairs, which measures public opinion on behalf of Associated Press, agreed with the statement: “If President Bush did not tell the truth about his reasons for going to war with Iraq, Congress should consider holding him accountable by impeaching him.”

It was not entirely surprising that 72 percent of the Democrats were inclined toward impeachment. What was more interesting was that 56 percent of self-described Independents were ready to hold the president to account, as were 20 percent of Republicans. For comparison sake, it’s worth noting that polling around the same time found that only 43 percent of Americans thought the Bush administration’s flawed No Child Left Behind law–which Pelosi and her fellow Democratic leaders will be quick to tell you is most definitely on the table–was a major problem that needed to be addressed.

But polls are easily dismissed, even by the politicians who live by them. Harder to neglect are the signals from around the country, where citizens have been asked to vote on the question of whether impeachment of President Bush and Vice President Cheney is needed. Pelosi might want to take note of the message her own constituents sent on the same day that the Democrats’ victory reversed a dozen years of Republican control of the House.

San Franciscans were asked on Nov. 7 to vote “yes” or “no” on Proposition J, a measure calling on the city’s elected representatives to “use every available legal mechanism to effect the impeachment and removal from office of President Bush and Vice President Cheney for committing high crimes and misdemeanors in violation of the United States Constitution.” The measure won with more than 58 percent of the vote. Pelosi’s hometown wasn’t the only city to vote for impeachment on November 7. Calls for impeachment won voter approval from Cunningham Township, Illinois, to Berkeley, California, adding the names of those communities to the list of two-dozen municipalities nationwide that have now officially adopted impeachment resolutions.

Another measure of popular sentiment regarding impeachment–one that Pelosi should understand–came in the congressional elections of Nov. 7. More than three-dozen Democratic members of the House faced the voters as explicit advocates for keeping the impeachment option on the table. Thirty-eight members of the House signed on over the past year to H. Res. 635, a measure sponsored by Michigan Rep. John Conyers, the ranking Democrat on the Judiciary Committee. It proposed the establishment of a select committee to investigate whether members of the Bush administration made moves to invade Iraq before receiving congressional authorization, manipulated pre-war intelligence, encouraged the use of torture in Iraq and elsewhere, and used their positions to retaliate against critics of the war.

H. Res. 635 explicitly states that the select committee would be charged with making recommendations regarding grounds for the possible impeachment of Bush and Cheney.

So how did supporters of the “dangerous” principle that impeachment should be kept “on the table” fare at the polls?

One co-sponsor of the resolution, Rep. Bernie Sanders (I-Vt.), was elected to the Senate. Every other member of the House who signed on for an impeachment inquiry and faced the voters on Nov. 7 was reelected, in many cases with increased percentage of the vote.

It should come as no surprise that, when offered the option of impeachment, voters opt for it. Outside of Washington, there are still a lot of Americans who recognize impeachment not as the “Constitutional crisis” that so much of the political class and the media fear, but as the cure for the crisis. This was as the founders intended when they inserted all those references to impeachment into a Constitution that does not mention God, corporations or the two-party system. They wanted Americans to know that they had a tool for challenging the tyranny of an “elected despot.”

So, it falls to the people to restore a proper understanding of the necessity of impeachment: by voting for local resolutions, working through state legislatures, passing petitions and protesting. The process will be helped along by the investigations of Bush administration misdeeds that will, as did the initial investigations of Watergate-related wrongs, provide steady re-confirmation of the crisis.

Before the House Judiciary Committee weighed the articles of impeachment against Nixon, a congressional break sent federal legislators back to their home districts. Many, including Tip O’Neill, went with some trepidation. They feared that the people would tell them that Congress had gone too far in questioning the authority and actions of the president. Instead, as O’Neill told a reporter for Time magazine, they found that the people were asking: “What are you waiting for?” As Time noted in that Watergate summer of 1974, members of the House learned from their constituents that “impeachment is good politics.” Indeed, it became increasingly clear to Democrats, as well as smart Republicans, that it was riskier to refuse to impeach than it was to embrace the Constitutional imperative.

Nancy Pelosi and her compatriots may say that impeachment is off the table now. But, soon enough, if the people lead as Jefferson and Madison intended, congressional Democrats will again learn that impeachment remains good–and necessary–politics.

John Nichols is a fellow with The Nation Institute who writes “The Beat” column and covers national politics for The Nation. He is also an associate editor for the Capital Times in Madison, Wisconsin and a regular contributor to In These Times and The Progressive. He is the author, most recently, of Jews for Buchanan: Did You Hear the One About the Theft of the American Presidency?

The Case for Enthusiasm Over “Electability”—Or, Why We Don’t Need Another John Kerry.