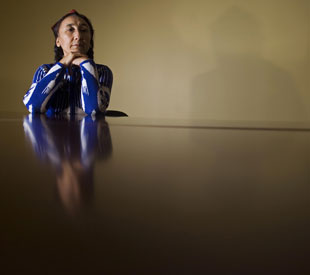 Falsely imprisoned, this human rights activist is fighting the Chinese government’s right to rule her people.

Rebiya Kadeer has been likened to the Dalai Lama, and the comparison grew more apt when the Uighur (pronounced wee-gur) human rights activist became a close contender for this year’s Nobel Peace Prize, an award conferred on the Dalai Lama in 1989.

Yet in the United States, Kadeer and her cause remain relatively unknown. Like the Dalai Lama, Kadeer is challenging the Chinese government’s moral and legal right to rule her people–the Uighurs, an ethnically Turkic-Persian people in western China, whose homeland, Xinjiang, was annexed by China in 1949. The backlash against this annexation exploded in the mid-’90s, when Uighur separatists carried our widespread protests. Some Uighur extremists, who were supported by Islamic extremists in Pakistan, even bombed Chinese targets.

China reacted harshly, jailing thousands of Uighurs and using paramilitary forces to disband protestors. In 1999, when Kadeer, then a wealthy businesswoman and member of China’s parliament, began speaking out on behalf of her people, she was jailed.

In 2005, the Chinese freed Kadeer, largely because of pressure from the United States. Since then Kadeer has lived in Washington D.C., where she has spearheaded a peaceful campaign against China’s rule in Xinjiang. Yet hundreds of Uighur activists remain in jail and serious human rights violations are being committed in the province, according to Amnesty International.

Why is the situation in Xinjiang not as well known as that of Tibet?

The worst thing is that [in 1949] only five percent of our population was Chinese; the rest were all from the Turkic ethnic family, with Uighurs as the majority. Since then, the Chinese government has transferred so many Han Chinese into our land that they are now the majority and have made Uighurs a minority in our own land. By official Chinese statistics, Xinjiang now has 8.7 million Uighurs and 7.5 million Chinese. In reality, if you count the number of migrant Chinese workers in Xinjiang, they outnumber us.

The Chinese say they want to integrate Uighurs into China and develop the region. In the ’90s you yourself were a member of China’s parliament and your trading company made you the seventh richest person in the country. What happened?

Initially, I believed in the Chinese government, and thought that if I reported the human rights violations taking place in Xinjiang, Beijing would pay attention. But in 1997, a massacre took place in Ghulja City and several hundred Uighur youth were killed and several thousand were arrested. When I went to China’s People’s Congress and told the high-level Chinese officials what happened and how wrong the massacre was, they ignored me. That’s when I realized they wouldn’t change their policies–that was the breaking point.

They soon jailed you?

Were you mistreated in prison?

I was not tortured. Instead the guards would torture other Uighurs in front of me, to scare me and psychologically torture me. The prison guards would taunt me, saying, “If you are so powerful and strong, why don’t you help these people now?”

Then, in 2005 I was freed because, I’m told, Secretary of State Condoleezza Rice made my release a pre-condition for her visit to China. I came here [to Washington, D.C.] as soon as I was freed.

The Chinese government still brands you a terrorist and a criminal who has cheated banks out of millions.

The Chinese government has been slandering me with their propaganda. In truth, I am opposed to terrorism in all shapes and forms. I want our struggle to be peaceful and patient. Unfortunately, since my husband and I have left the country, the Chinese government is now threatening three of our children. First, they waited to see if I would get the Nobel Peace Prize. Now that I have not, they have gone ahead and accused my children of all kinds of things and on October 26 began trying them in court. [There has been no verdict yet.]

Will you stop campaigning if things get bad for your children in China?

Never. I will never give up. I will continue my path, for it is correct and righteous. The suffering of my children is not their own, it is symbolic of the suffering of all my people.

How has your cause been received by the U.S. government?

The U.S. government and the American people are quite concerned with the situation of the Uighur people. A lot of these issues have been raised during the U.S.-China bilateral dialogue, including the case of my arrested children. Some 72 congressmen and women have written to [China’s President] Hu Jintao asking him to release my children.

When I was released, I had no money in my pocket because the Chinese government confiscated all of my possessions. Now, with the generous financial support of the National Endowment for Democracy, we have been able to have an office in Washington and operate globally. I am extremely grateful for NED support. We also hope to begin getting donations from other Uighurs living abroad. It won’t be much, because we are not as well settled abroad as, say, the Tibetans. But it will help us in many ways.

How would you like to see the international community criticize China?

I’d appeal to the international community to take a proactive approach and raise human rights violations directly with the Chinese government in their dialogues. The international community should demand the Chinese government honor Uighur autonomy, respect Uighur culture, give Uighur people the right to develop their own economy, and to have freedom of speech, and press China to stop relocating young Uighur teenagers to Mainland China and instead invest in their education in East Turkistan itself. And of course, they should request Chinese government to stop transferring Han Chinese into our territory. That is crucial.

How is the Chinese government relocating Uighur children?

There are few decent schools in East Turkistan, so every year the Chinese government takes 5,000 to 10,000 Uighur minors to mainland Chinese cities to get ‘educated.’ Basically they are brainwashed. If the Chinese want to educate Uighurs, why don’t they build good schools in the Uighur Autonomous Region?

You have accused the Chinese government of keeping Uighurs out of jobs.

It’s an appalling situation. East Turkistan is now the largest oil-producing region in China. Not only do we not get any royalties from the oil, Uighurs cannot even get the lowest jobs in the oil companies because they are reserved for the Chinese migrants the government is bringing in to dilute our identity.

You and others have also complained about China’s strictures against the practice of Islam.

The government sees Islam as a threat. So they are strictly restricting the practice of the religion in order to make our people faithless. The government imprisons Uighurs who teach their children about religion. Minors and people who work for the government are forbidden from going to the mosque and are expected to follow atheism. This is not just Communist ideology. It singles us Muslims out, as the government does not forbid Chinese officials from going to Buddhist or Taoist temples.

Uighur culture, faith and tradition are very unlike Chinese ones. In the Chinese government’s eyes, anything that emphasizes these differences is frowned upon. Basically the government restricts Uighurs from learning about democracy, human rights, anything like that. Again, this is not just Communist ideology. Chinese people enjoy much more freedom in what they can read, write and publish.

Do you think you don’t get as much international support as the Tibetans because the West fears that if Xinjiang became independent it would become an Islamic state?

Uighurs are not going to establish an Islamic state and the international community should realize that. If East Turkestan [Xinjiang] becomes independent it would be more like Kazakhstan and Kyrgyzstan rather than like Pakistan or Saudi Arabia. You can see how few of our women are veiled. Uighurs are more secular than religious because of China’s atheist indoctrination. Many don’t know much about religion and will want a secular state.

What are your best hopes for taking your movement forward?

I hope China will march toward democracy and truly respect people’s human rights. But that will take some time, I think. In the short run, I will continue our own struggle with peace and patience.