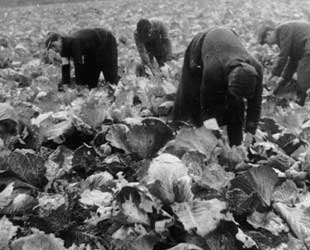 A garden on the site of Skra, the former sports stadium on Okopowa Street in the Warsaw ghetto in 1940.

The image of the Hortus conclusus–literally “enclosed garden”–has had a place in Western art and literature at least as far back as the book of Genesis. The Garden of Eden was humanity’s first home, an earthly paradise walled off from the wasteland.

Gardens have always been places apart, spaces of contemplation and respite from the travails of everyday life. They fulfill basic human needs, producing sustenance and bringing us into contact with the vital forces of the natural world.

In his Defiant Gardens: Making Gardens in Wartime (Trinity University Press), professor of landscape architecture Kenneth Helphand explores the many meanings of the hortus conclusus as expressed under the most extreme conditions. As the title suggests, Helphand is interested in gardens that defy impossible circumstances, including war, genocide, exile and imprisonment.

Readers might be familiar with wartime “Victory Gardens” (vegetable patches grown to supplement food rations) but the author has a different kind of nourishment in mind. As he puts it, gardens also serve as “mechanisms of human survival.” They provide a sense of familiarity and tranquility; they express individual creativity and communal solidarity; they feed not only the body but the mind and the soul.

Helphand distills these various functions into the themes of “life, home, hope, work and beauty,” which he then traces across historical moments in which human dignity was trampled upon: the blood- and muck-filled trenches of World War I; the Jewish ghettos of Nazi-ruled Eastern Europe; prisoner-of-war camps during World War II; and Japanese-American internment camps. In each instance, he grounds his case studies in their historical context and makes evocative use of archival documents, diaries and memoirs. Gardens and gardeners are vividly depicted through photographs, designs and sketches.

Discussing gardening during the Holocaust, when the seemingly innocuous act of planting became a deliberate gesture of defiance, Helphand writes, “normal behavior in abnormal conditions took courage. The ordinary became extraordinary. The expected unexpected. Who imagined gardens in the ghetto?” The tiny plots yielded little in terms of crops–a few potatoes, some shriveled cabbage–but defied the bleakness of their urban surroundings. For an imprisoned people deprived of the capacity for productive activity, the chance to reap the fruit of their labor meant the difference between emotional survival and spiritual death.

By the same token, ending that production signaled the extinguishing of hope. The children of the Lodz ghetto had planted a small garden, but upon learning that they would be deported, “a spontaneous fury seized them.” Helphand writes:

They went to their gardens and, in a burst of anger, trampled the few beds of pathetic beets. … ‘Nothing will grow after we have gone! Nothing will bloom in this garden!’ a girl about ten years old screamed in rage. … They had loved it, nurtured it and watched over it and it had not heeded them or responded to their loving care.

For Japanese-Americans during the Second World War, gardening was an act of defiance against the harsh physical conditions of the California desert to which they were confined. Those interned showed remarkable resolve and ingenuity, using stone, cacti and bottle caps to create traditional Japanese landscapes; some even crafted Bonsai trees out of the indigenous sagebrush. Through gardening they domesticated a foreign and untamed landscape and to express their collective identity–“a way of taking possession through labor, design, creativity, use, and cultural signification.”

As Helphand observes, “garden” is at once a noun and a verb, a place and an activity. In addition to offering refuge, gardens provide work and distraction. Prisoners of war turned to gardening to ward off “barbed-wire disease”–the feelings of helplessness and frustration bred by incarceration. In gardens, labor becomes liberating, not oppressive.

Defiant gardens persist to this day. Using seeds donated from home and employing local irrigation techniques, American soldiers work to make plants thrive in the arid, war-torn landscape of Iraq. As one serviceman in Tikrit puts it, troops crave the simple “joy of growing something.” Although gardens are by nature ephemeral– if left untended, they are quickly re-absorbed into the “chaos of nature.” Nevertheless, they give a sense of permanence and stability. Reinforcing the reliable cycles of life is important when one is surrounded by death and destruction. Gardening is the antidote to “a day of dodging roadside bombs [and] RPGs.”

Toward the end of the book, Helphand hits upon the idea of biophilia, the innate human instinct to seek out and relate to all forms of life.

Gardening expresses our fundamental evolutionary drives, and is thus “part of what makes us human.” In times of peace and prosperity, we tend to take green for granted, and sometimes lose touch with this instinctual need. In moments of crisis, however, the commonplace becomes necessary.

In the end, Defiant Gardens serves not only as a compelling testament to the power of the human spirit but a reminder of the fundamental bond between Man and Nature.